The Coopers are at the Church potluck when Mary is asked to be the bookkeeper for the church. She is beyond excited.

Meemaw doesn’t want to babysit, so she suggests leaving them home alone. After all, Sheldon is intelligent and they can take care of themselves. George likes that suggestion, seeing as how much the job means to his wife. 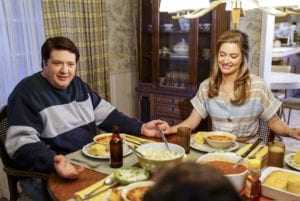 Mary’s first day is going well and while she’s a little overzealous, Sheldon and Missy aren’t too thrilled with being home alone. Meemaw takes it upon herself to check on the twins and, in doing so, scares them. They pull the fire extinguisher on her.

Seeing that they’re fine, Meemaw leaves. Almost immediately after she leaves, Sheldon gets a splinter. Missy tries to find tweezers, which leads them to sneak into their parent’s room. The phone rings, twice, and scares them half to death. It’s just Mary and George checking up on them. 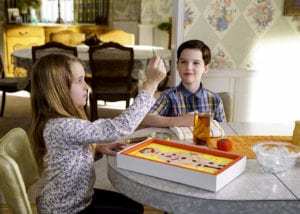 Missy finds their game of Operation, which has tweezers in it. They use whiskey to sterilize and Missy successfully pulls out the splinter.

Today was a win for everyone! Well, until Mary gets home from work…

Welcome back! This episode was a great way to get back into the swing of things. It was funny, original and Meemaw is a hoot and a half. I just don’t want to be around when George finds out that Missy used all his whiskey. See you next week!

‘Young Sheldon’ Recap “A Computer, A Plastic Pony, And A Case Of Beer”