Meemaw is in town and like the average Meemaw, things are more fun when Meemaw is around. All the candy, poker and firecrackers you could want. 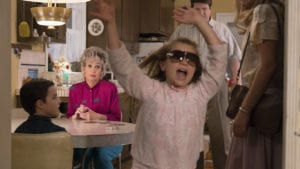 The Coopers and Meemaw attend mass the next day and while Pastor Jeff is preaching, Sheldon raises his hand to tell him that he’s wrong. Pastor Jeff basically disproves Sheldon (kind of) and this prompts Sheldon to research further why the pastor is wrong.

George is having chest pains so Mary rushes him to the hospital. Meewmaw comes over to watch the kids. Everyone is worried but Meemaw assures them that things will be ok.

Georgie tells Missy and Sheldon that he’s going to the hospital. Georgie drives them and hits every trash can along the way. Sheldon leaves a note so Meemaw doesn’t worry. 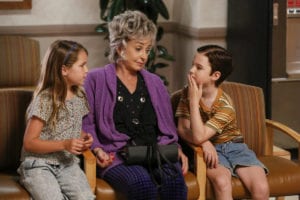 Sheldon walks past his father’s hospital bed while looking for the bathroom. Seeing all of the commotion in the room, Sheldon seeks the solace of the Chapel and begins to pray.

George is going to be fine. Maybe God does exist?

Sunday service rolls around and Sheldon yet again questions the pastor. This time goes better than last, but Sheldon still embarrasses his family.

Meemaw is awesome! I hope to see her more this season. This episode brought some heavy insight to Sheldon’s father’s health. I don’t know how I feel about that considering this is episode 3. This episode also called faith into question and I want to know how our fellow Christians feel about that. Does you guys love it or hate? Hopefully next week goes better for George and Pastor Jeff.