It’s Science Fair day. Sheldon works harder than all of the students combined but only gets honorable mention. To say that Sheldon’s upset is an understatement. Mary is concerned but George thinks it’s a good lesson for Sheldon to learn. Sheldon decides to take a different approach to school: youthful rebellion. 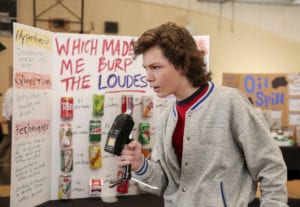 Sent to bed without dinner, on spaghetti and hotdog night… that’s rough. Sheldon decides he’s done with science. Mary thinks it’d be a good idea for Sheldon to talk to someone. Sheldon feels better about his situation but decides to go as far away from science as possible. He’s taking up acting.

Mr. Lundy (Jason Alexander), the drama teacher, offers some advice an invites Sheldon to audition for the school play. Sheldon goes home and researches how to act. He prepares a Shakespearean monologue, “Don’t Cry for Me, Argentina” and tap dance for his audition and wows Mr. Lundy. Sheldon does so well that he lands the lead role, Annie. 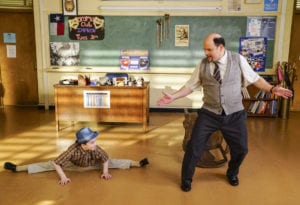 It’s the night of Sheldon’s show and it’s a packed house. Stage fight takes over and Sheldon feels like he can’t go on. Mr. Lundy calms him down but it doesn’t quite work. Mr. Lundy goes on in his pace.

This episode is wonderful. I never expected to see Sheldon star in a musical and sadly I never will. Luckily, we were treated to Jason Alexander’s singing. Anyway, this episode was so out of the realm of Sheldon’s universe that I couldn’t help but love it. I wonder how present-day Sheldon would be on stage. Do you think he still knows how to tap dance?