Sheldon is not cut out to ride the school bus. He is often hunted by predators. He picks up a book on Jiu-Jitsu. He practices the moves on Tam but at 58lbs soaking wet, he doesn’t do much damage.

He wraps himself in bubble wrap for protection. Mary thinks the worst but George thins she should hold off. Georgie doesn’t know anything about Sheldon getting bullied but reluctantly agrees to look after him. It turns out that Billy’s sister, Bobbi, is the one picking on him. Apparently, the girl slaps him around and takes his lunch money. 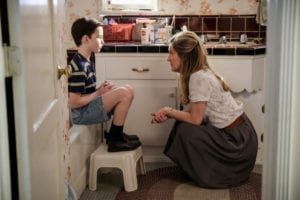 George goes to talk to Bobbi’s dad to address the situation. The girl denies it so there’s nothing that can really be done. Of course, George doesn’t tell Mary that. Bobbi corners Sheldon in the garage and Sheldon enlists Missy’s help in the matter.

Mary tries to fix things but ends up harassing Bobbi’s mother at the bowling alley. Hershel comes over to address Mary’s behavior and George laughs and brings up the fact that Hershel was no help earlier. Hershel promises to talk to Bobbi and the dads come to an understanding. 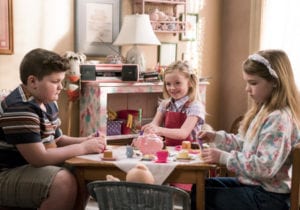 Missy makes friends with Billy and Bobbi and solves Sheldon’s problems. Kind of.

Missy and Georgie helping Sheldon? What is the world coming to? It was really nice to see that and to see Mary and George featured as much as they were. Same with Billy, I love his character, he’s so innocent and he reminds me of some the kids I teach. This episode was cute, but I keep finding myself loving the secondary characters over Sheldon. Next week looks a lot more Sheldon- centric, I can’t wait.