Sheldon and Tam spy a girl checking out a geo-statistics book in the library. This peeks Sheldon’s interest. Sheldon goes to talk to her and invite her to sit with them.

Her name is Libby and she wants to be a geologist. Tam is in love and Sheldon is both threatened and delighted by her brain. 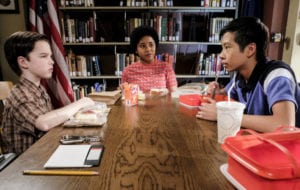 Hearing that Sheldon has a girlfriend, George and Georgie spy on them through the library window. George didn’t know Libby was black. Georgie calls him out on it and tells him he should check out some of the books on MLK Jr.

Libby is seducing him with geology, she even got him to go outside to look at rocks!

At home, Sheldon is on the phone with Libby while his family contemplates the idea of Sheldon having a girlfriend. Mary is worried but George says this is normal. What did Mary expect when she sent him to high school? 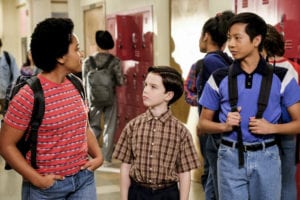 She certainly didn’t expect Sheldon to want to drive to Houston with Tam and Libby to watch a movie. She’ll gladly drive him, but Sheldon doesn’t want his mommy taking him. He angrily cleans the house.

Mary breaks down and says he can go if she meets Libby first.

Libby proves that Mary has nothing to worry about, she’s been babysitting for quite a while. This upsets Sheldon. He thought they were equals, but she clearly doesn’t.

Tam and Libby go to the movie without him. He tried to make a move and got shot down. Libby is no longer going to be joining the boys at lunch.

I liked this episode. It’s nice to see Sheldon stepping out of his comfort zone with meeting new people and going outside. Unfortunately, things don’t end well. Libby is almost twice Sheldon’s age, they might be intellectual equals, but he’s still 9 years old. It was cool to see where Sheldon’s hatred of geology came from. It’s the little things like that that make me happy. I wonder what quirk they’ll touch on next.