Sheldon begins choking on a Jimmy Dean’s sausage. He didn’t chew enough. His dad saves him but not before he notices Georgie double dipping in the jelly. 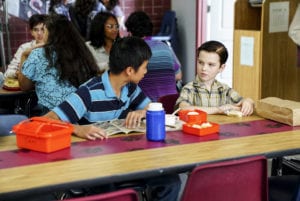 Sheldon has never been late to school before, and Tam is sitting in his spot in the cafeteria! He’s not having a good day.

Sheldon is afraid to eat because he doesn’t want to choke again. Meemaw blends up pork, gravy, and broccoli so he can drink his dinner fear free.

Now his mother is blending all of his meals for him. Sheldon’s mom and dad discuss possibly taking him to see a psychiatrist. They think it might help and go for it. 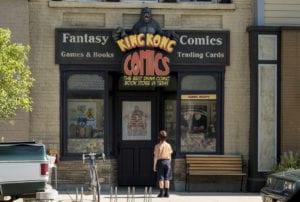 While his parents are talking to the doctor, Sheldon reads an X-Men comic. Sheldon leaves while the adults are talking. He left to go to a comic book store where Tam is hanging out.  Sheldon starts eyeing Tam’s red vines and gives in. Just like that, he got over his fear of chewing.

Sheldon comes home to cops waiting outside his house. He forgot to tell his parents where he went. Oops.

This episode was cute. It touched on Sheldon’s quirky phobias as well as the beginning of his love of comic books. It was also nice to see Georgie and Missy’s take on Sheldon. Sheldon gets all of the attention leaving his siblings in the dark. While I do like to see how Sheldon got to be how he is today, it’s still nice to see Georgie and Missy’s side. Hopefully we get to see a lot more of them in the future.