It’s flu season in Texas and Sheldon is not handling it well. One little sneeze from his teacher was enough to ignite his fight or flight instincts. He chose the flight option and left class without a hall pass which lands him straight into detention.

Georgie advises Sheldon to stay close to the teacher because they’re going to eat him alive. Meemaw even suggests giving him some money to buy some protection.

Sheldon makes it to detention but flees again when he hears that something is going around and the detention supervisor has a tickle in his throat. Now he’s suspended and has a mark on his permanent record.

Mary takes Sheldon to the doctor and the doctor tells him that there really isn’t anything he can do to fully prevent getting sick but should take precautions to reduce the risk. Bring on the gloves and mask! 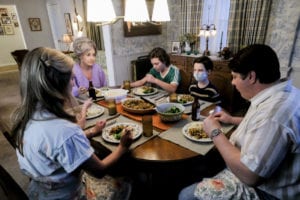 Because Sheldon is suspended, he isn’t in school. The girls in his class begin asking Georgie about him and Georgie pulls the sympathy card to get close to these girls. Typical teenager.

The gloves and mask help for a little while. Well, until Missy draws a silly face on his mask and the news reports that this flu season is going to be bad. Sheldon then turns the garage into a sterile bubble.

Mary is furious, he needs to learn how to combat this fear. She does everything she can to try to get Sheldon out of the bubble. Nothing works. Even Meemaw’s cookies can’t lure him out.

Meemaw then speaks to his character. As a man from Texas, how could he let a little thing like the flu scare him? He gathers his pride and leaves the bubble. 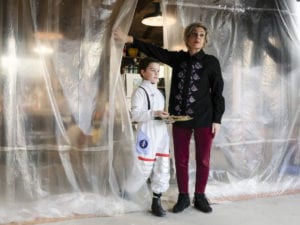 Inevitably Sheldon catches the flu. But it’s not so bad because Mary is there to take care of him and sing “soft kitty.”

I really like how this show explains Adult Sheldon’s phobias. I have watched The Big Bang Theory from the beginning so this show is a wonderful in-depth look at why Sheldon is well, Sheldon. I also love Missy and Georgie. They are so funny and I do wish we’d see them more in the mother show. They have awesome one-liners and they make up for the times that Sheldon is a bit unbearable.

Due to the Olympics, Young Sheldon will be taking a hiatus and will be back March 8th.

‘Young Sheldon’ Recap “A Computer, A Plastic Pony, And A Case Of Beer”

‘Young Sheldon’ Recap “An Eagle Feather, A String Bean, And An Eskimo”