Turns out that Sheldon went into theoretical physics to prove that a reusable rocket is possible. That and to prove the NASA guy wrong. Questions like this keep him up at night.

Because he needs a computer, he tries to gather as much money as he can, including trying to take out a mortgage and hitting up Meemaw. 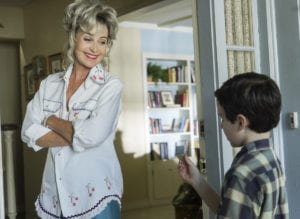 By the end of the day he had collected $9 and a peso.

He even tries to get his mom to take him to Radio Shack. She says no and Sheldon throws a temper tantrum. Meemaw gives him cough syrup to calm down and George says they need to ground him. No Radio Shack for a month.

Sheldon wakes up with a severe tummy ache. He thinks he has an ulcer and parents take him to the doctor. He did have an ulcer. Not having a computer to do research and not getting enough sleep really stressed him out. 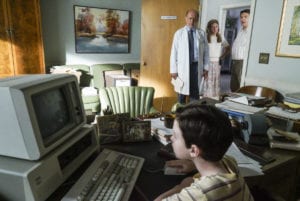 Sheldon completes his rocket research and ships his findings off to NASA.

To keep Sheldon from getting another ulcer, the family takes a trip to Houston. Dr. Hodges agrees to listen to Sheldon, after some convincing from George, and he is really impressed with Sheldon’s work. Unfortunately NASA doesn’t have the means to carry out Sheldon’s research.

It took NASA until April, 2016 to successfully execute the reusable rocket.

‘Young Sheldon’ Recap “A Solar Calculator, A Game Ball, And A Cheerleader’s Bosom”

‘Young Sheldon’ Recap “A Therapist, A Comic Book, And A Breakfast Sausage”

Home » Uncategorized » ‘Young Sheldon’ Recap “A Patch, A Modem, And A Zantac”