The Suicide Squad is finally coming out in August, and it’s about time! The James Gunn helmed sequel/reboot of the team has a surprising amount of hype surrounding it. We all know that the hype is usually reserved for Marvel films, so it’s nice to see people so invested in a DC film. The film will see the debut of several DC characters in live-action for the first time ever, as well as bring some beloved ones back. Margot Robbie is back as Harley Quinn, for example! A new character everyone is excited to see, though, Is John Cena‘s Peacemaker! James Gunn has been posting a lot of stuff surrounding Cena on his social medias. He actually recently shared a story about how Cena once went home to nap – while still in costume. He posted a new photo to Instagram, though, which features Cena grabbing some coffee… in costume! I can’t believe how much John Cena loves his Peacemaker costume! I think it’s kind of heartwarming, he must be really happy to be playing the character!

You Can’t See Me!

“The weird thing is that this is on John’s day off,” Gunn wrote. Now, it’s entirely possible that the director’s joking, but what if he’s not? Could we potentially be living in a world where we might randomly run into The Peacemaker? I want to run into John Cena in costume, but also while wearing the helmet! 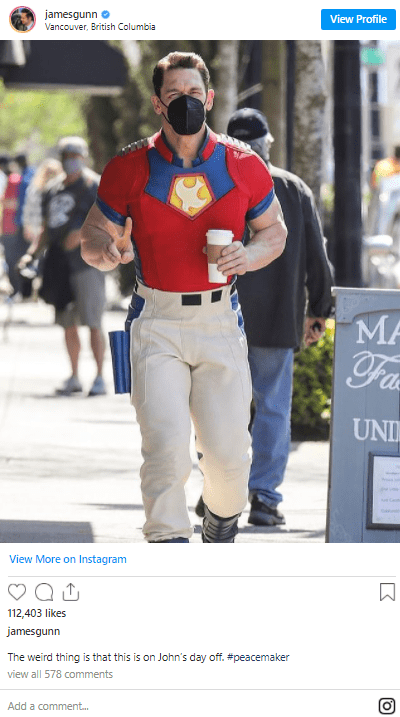 The pictures got some pretty funny replies from other celebrities, too.  “National treasure,” Seth Green wrote. “He’s like a Ken doll,” Jaimie Alexander said. The official account for the Peacemaker series also commented, writing, “No days off, James! But we do take a coffee break from time to time…”

Gunn said about the series, “Peacemaker is an opportunity to delve into current world issues through the lens of this superhero/supervillain/and world’s biggest douchebag. I’m excited to expand The Suicide Squad and bring this character from the DC film universe to the full breadth of a series. And of course, to be able to work again with John, Peter, and my friends at Warner Bros. is the icing on the cake.”

“I have said before that it has been a tremendous honor and an incredible opportunity to be part of The Suicide Squad and to work with James on what is going to be a fantastic movie,” Cena has said in the past. “I am unbelievably excited to have the chance to team up with him again for Peacemaker. We can’t wait for fans to see this.”

Can you believe how much John Cena loves his Peacemaker costume? I know I can’t.

The Suicide Squad will debut on August 6th on HBO Max and movie theatres! Then you can catch Peacemaker in his own HBO Max series sometime in 2022!

Home » Movies » The Suicide Squad: You Won’t Believe How Much John Cena Loves His Peacemaker Costume – He Wears It Out!