Sci-fi Westerns are everybody’s thing, right? Right. Wynonna Earp, a titillating series about a demon-killing, gunslinging badass named Wynonna, has a chance to make a gargantuan impact this month during the 44th E! People’s Choice Awards on November 11. The SyFy series, which has a rabid, and loyal fanbase, is joined by Shadowhunters, The Expanse, The Originals, and Supernatural in the Sci-fi/Fantasy Show of 2018 category, and let’s just say– much like her character, the shows leading lady is not one to go down without a fight. Though the competition has been fierce across the board, Wynonna Earp’s own Melanie Scrofano stopped by the People’s Choice Awards Food Truck during New York Comic Con, to hound, or should I say– encourage (wink wink nudge nudge) people to vote for her little show! 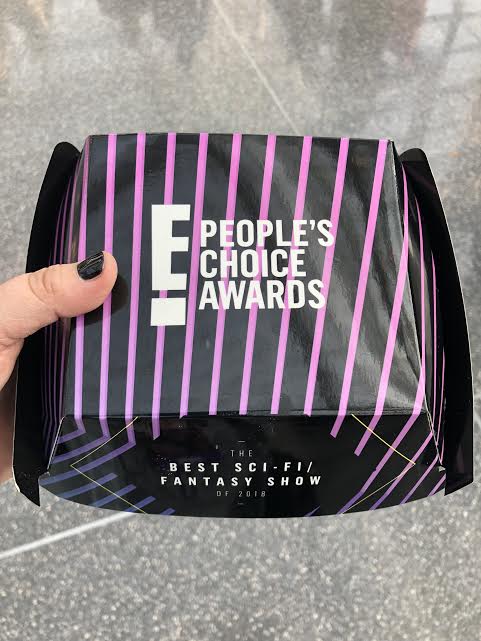 From endless selfies with fans, to an unwavering enthusiasm to get people voting… if you weren’t a fan of the show prior to being handed a donut covered with gluten and glitter by the boisterous actress, well, then you’re probably one now. Despite Wynonna Earp going up against Supernatural, aka the longest running show in the category, Earpers came in droves to show their support for the Canadian-American production not only online but in person.

Amid the insanity surrounding the People’s Choice Awards food truck during New York Comic Con, Scrofano found a few fleeting moments to catch up with Fan Fest News regarding the shows odds as a finalist in the Sci-Fi/Fantasy category, and to talk Whiskey and donuts… duh.

*WARNING: This interview may cause sudden urges to mix Whiskey, donuts, and NeoCitran. Do not try this at home, don’t do it. Do not. It is not recommended by anyone. Melanie Scrofano is, most likely, a trained professional.

MCKENZIE MORRELL: Wynonna Earp is up for Sci-fi/Fantasy Show of 2018 in the People’s Choice Awards coming up– why do you hope the viewers voted for Wynonna Earp?

MELANIE SCROFANO: I’m usually the worst, and will tell people to vote for whomever you want, it’s a democracy. But, I love our show. I think we have something really special, and I think we love our fans and we love ourselves [laughs] because we are super, super vain. There’s a whole lot of love in our show, and I’m sure the other shows have that too, so I won’t take that away from them, but if you voted for us we won’t say no to that.

MM: It’s a special kind of show, for sure. If you had to describe the show in three words, what would they be?

MM: We need shirts that say that, someone get on that! Speaking of Whiskey, what would you pair with it– what’s your go-to thing, excluding donuts, of course.

MS: This is going to the unsexiest thing I can say, and don’t maybe quote me on this [laughs]– like, don’t do it– don’t do it. I would pair it with NeoCitran. If you’re familiar with the cold remedy, it’s a great remedy when you’re sick. It gets in a nice little citric element, which I like [laughs].

MM: It puts you to sleep faster, when you’re sick.

MM: Now, you obviously directed a few scenes in the most recent season of Wynonna Earp, can you talk a little bit about that and the shift from acting to being behind the camera.

MS: It’s super nerve wracking to direct because if I did a bad job it would hang over me for the rest of the season. People would respect me less, and then it would be a really awkward thing. So there was that pressure. But I couldn’t have been around more supportive people, the cast was super supportive, they were like ‘you should be directing this, idiot.’ What more could I want.

MM: If you guys win on November 11, how are you going to celebrate?

MS: I’m going to sob uncontrollably, which is a totally normal way to win. I’m sure there will be some Twitter action, really nothing sexy, no NeoCitran Whiskey parties!

MM: [Laughs] We’ll have to save that for another time. Someone on Twitter asked about your Dateline NBC socks.

MM: What are you going to do during the hiatus, any fun things planned?

MS: Yes, I don’t know if I’m allowed to talk about it. It’s such a wanker thing to say– I probably can totally talk about it, but I’m trying to make it sound like I can’t. I’m doing a movie.

MS: It should be really fun. I might also be awful in it, don’t tell the Producers who hired me until it comes out.

MM: Last season left us with a huge cliffhanger– everyone’s gone, what’s Wynonna to do now?

MS: Well, what I hope is that she’s going to take a minute and you know that movie where they go to the mall and after the mall’s closed, they just go crazy in the mall. Find a mall, and go crazy! And then, obviously look to save some people. It’ll be fine. I’m sure if it’s the garden of Eden. It’s fine.

MS: I would probably find a way to do a sour cream glaze, with some kind of creamed Whiskey in the middle. Can you make it, do you cook?

MM: I do. I baked, and taste-tested a hot Cheetos donut.

MM: I had an interview a while back and one of the guests said that she would put hot cheetos on a donut with chocolate chips and frosting, so I made the donut [laughs] and I ate it. It was interesting.

MS: Okay, let me make this more doable if you actually might make it. Do a plain donut, with a Whiskey cream glaze. Instead of sour cream. Do it, get at it.

MM: To wrap up, is there anything you’d like to say to the fans, obviously we have a really passionate group of people who watch the show that follow you guys, so here’s a chance to speak from the heart, and show them some love.

MS: Oh man, every time, even at New York Comic Con, I am super nervous coming because you know, the People’s Choice, it’s not a small deal for a small show like ours and we actually, Earpers make me feel like we could, if we wanted to, take over the world. We wouldn’t, because we’re way too nice.

MM: That’s Canadians for ya.

MS: [Laughs] I feel like there’s so much positive power in our little family, and every time someone showed up with a pin that said ‘I voted for Wynonna Earp’ or voted online, I feel it at home. So thanks for bringing me home wherever I go.

MM: As we all sob, and sip Whiskey.

*This warning is a joke, and should not be taken seriously.