The Falcon And The Winter Soldier finale was one hell of a good time. We got to see all the things we wanted to see, basically. That includes Sam Wilson taking over as Captain America and John Walking becoming U.S. Agent. The finale set up a ton of storylines we’ll have to revisit, which may come in the newly announced Captain America 4! Sharon Carter’s betrayal will likely lead to Armor Wars. One of the biggest, however, was Valentine Allegra de Fontaine forming her own team of superheroes, which would include U.S. Agent. Now Wyatt Russell is addressing his future as the U.S. Agent! 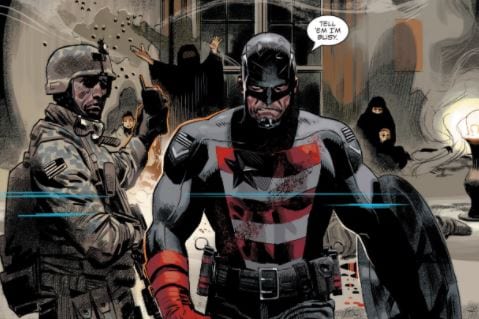 The scene was heavily hinting that U.S. Agent would return, but it seems like the actor doesn’t want to promise anything he can’t deliver on. He admitted in a recent interview that he doesn’t actually know whether or not he’ll be coming back. That’s kind of disappointing since I know everyone is excited to see John Walker’s return!

Russell spoke to Vanity Fair, “Part of the way I approached Marvel was it’s all your last time you’re going to do it. Marvel operates in a really cool way where they don’t make decisions before they see what works. I’m not a part of any of this decision-making, obviously.”

Many believe that Fontaine is building the MCU’s versions of the Thunderbolts. Russell wouldn’t confirm whether he’d be involved but he did have a thing or two to say.

“Hopefully you were taken from someone who you really are set up to despise down the journey of understanding where he came from. Whether or not you like it or agree with it, you’re going to understand why he’s doing it. At the end of the series, he’s grown into himself in a very dangerous way.” he said.

Do you want to see John Walker return to the MCU? Are you glad that Wyatt Russell is addressing his future at the U.S. Agent?

You can watch the entire The Falcon And The Winter Soldier series on Disney+!

Home » Disney+ » The Falcon And The Winter Soldier: Wyatt Russell Is Addressing His Future As The U.S. Agent!