WWE’s Universal Champion Roman Reigns has relinquished his WWE Universal Championship tonight on Raw. At the start of the show, Roman Reigns,real name Leati Joseph Anoaʻi revealed that he had beaten Leukemia in 2008, when it had went in remission. 10 years later, it has returned and he announced that he is taking a leave of WWE to spend time with his family and battle this disease again. His Shield stablemates joined him on stage, visibly shaken by the news with stable member Seth Rollins unable to hold back tears. 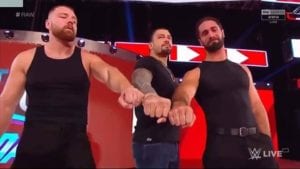 The WWE universe and roster is already responding with well wishes including John cena,The Usos, and Matt Hardy who tweeted:

‘Courage – strength in the face of pain or grief.’ You have given us your everything including a courageously vulnerable moment. We, your WWE family, give you all of our love and support. #ThankYouRoman #NeverGiveUp

We been here for u, and will stay here for u. Day one uce. We love you. @WWERomanReigns #ThankYouRoman pic.twitter.com/eszthQWPAC

An amazing human being, an incredible performer & a man I’m proud to be friends with. My thoughts & prayers are with you & your family. Get well soon, champ! #ThankYouRoman https://t.co/jL1Q5dVvzs

We here at Fanfest News wish Roman a speedy recovery and cant wait for Roman to Superman punch his way to a long and fruitful life ahead.