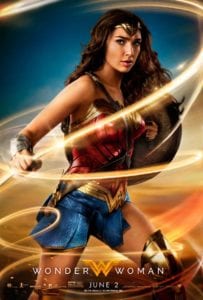 With only two weeks to go before her debut, it looks like Wonder Woman is destined to be a hit. Official reviews from the movie are classified for now.  Critic reactions were positive after its first screenings were held in multiple cities over the last week. Fans, I think your going to like what you see below.

Before she was Wonder Woman (Gal Gadot), she was Diana, princess of the Amazons, trained to be an unconquerable warrior. Raised on a sheltered island paradise, Diana meets an American pilot (Chris Pine) who tells her about the massive conflict that’s raging in the outside world. Convinced that she can stop the threat, Diana leaves her home for the first time. Fighting alongside men in a war to end all wars, she finally discovers her full powers and true destiny.

Best part of ‘Wonder Woman’ is the film has really funny parts and an optimistic and heroic protagonist. Great step forward for DC Films. pic.twitter.com/pAwm8j6y34

Our own @JimmytotheO has seen #WonderWoman! He calls it "Fantastic! As touching as it is thrilling!" Full review soon! pic.twitter.com/9ZfpiQdV6L

#WonderWoman is the best DCEU film so far. The heart of Gal Gadot's Diana powers it, and the shift from mythic into WWI story really works.

Also @GalGadot is PERFECT as #WonderWoman! I can't wait for you guys to see this film! #SheIsWonderWoman

WONDER WOMAN is great. My favorite of the recent DC movies. It's fierce, funny, well-written and badass. @GalGadot owns it. Her lasso FTW pic.twitter.com/rQ0ufZxWXP

#WonderWoman is hands down the best DCEU Film to date! Film is SO GOOD. I absolutely loved it! Bravo @PattyJenks @GalGadot @GeoffJohns 👏🏽⚔️

Loved WONDER WOMAN. She reminds me of Christopher Reeve's Superman: true north superhero w/ no angst or cynicism, which is needed right now.

Wonder Woman is the DC movie I've been waiting for. It's exciting, inspiring, funny, and has some truly awe-inspiring action scenes.

#WonderWoman is a flawless superhero movie. Loved every second of it. Amazing work, @PattyJenks! pic.twitter.com/UJMDI7Kb2k