Lets go back to SDCC 2013 to Zack Snyder reading those iconic lines from Frank Millers The Dark Knight Returns, “I want you to remember, Clark…in all the years to come…in your most private moments…I want you to remember…my hand…at your throat…I want…you to remember…the one man who beat you.” No matter how you felt about Batman V Superman you have to admit that if you are a Bat fan that made your heart skip a beat. Even as someone who isn’t always the biggest Miller fan that moment is one of Bat’s best. With a quote like that none of us were sure how close to the source material they were going to stick, then it was announced Jena Malone was cast in the movie, but we were not given a name. Many speculated that maybe she would be cast as Carrie Kelly who in The Dark Knight Returns appoints herself as Robin and saves Batman’s behind after a particularly brutal beating. The other possibility was Barbara Gordon, who in the history of the DC universe has three stages to her character, first just Gordon’s daughter, then Batgirl, and then after a terrible Joker incident she assumes the identity of Oracle. A survey was posted on Reddit revealing Malone’s role as Barbra Gordon, though she was cut out of theatrical version of the film. So we will all have to wait until we get the extended version on video to make sure this is a fact. Another point of speculation is who’s Robin suit are we seeing in the Batcave, DC has teased that it belonged to the second Robin in the comics, Jason Todd. So if we indeed have Barbara Gordon and Jason Todd  existing or at least one point existing in the DCCU, where is Dick Grayson!?!

Before DC Rebirth Dick with the help of Bruce faked his death the infiltrate Spyral and becomes Agent 37, this has made many a fan think that maybe Dick will take the same path in the DCCU. In the Suicide Squad trailer we see Scott Eastwood dressed as a solider, for the tiny second you see him he seems to have a sense of humor and also looks a bit smug, which are two defining character traits of Dick. Bruce has always been pretty interested in A.R.G.U.S. maybe asked Dick to go under cover? Another possibility is Grifter aka Cole Cash, he has actual military background in the comics and is also a lady killer with a great sense of humor. All that is confirmed at this moment is Scott Eastwood is in Suicide Squad and that on IMDB his character is yet to be named. 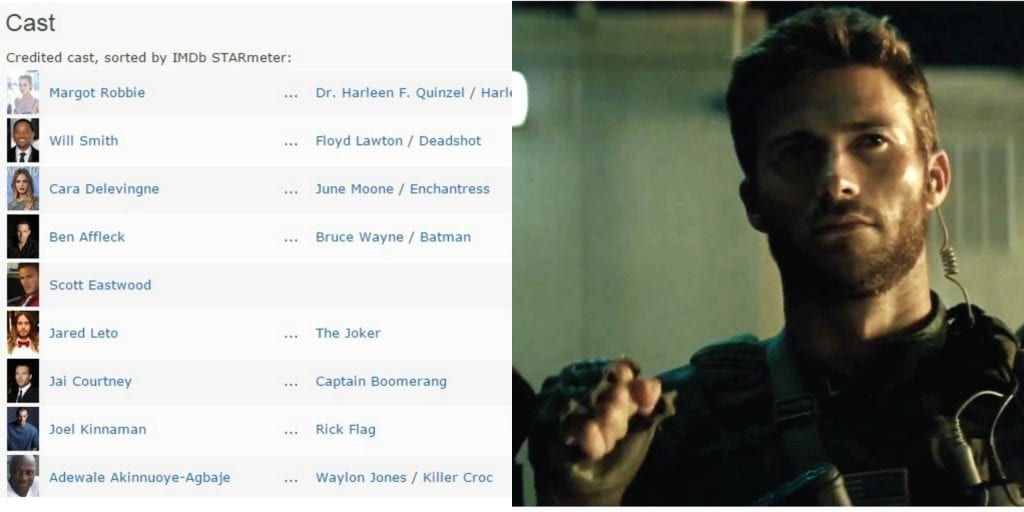 Notice he is listed between Batman and Joker…am I reading into this…of course I am I love Nightwing!!!

The real moral of the story is I don’t care who Eastwood ends up playing, it would make my heart sing if he was indeed Dick, but I am okay with where ever the DCCU gods choose to take us. I just hope in some form or another Dick Grayson gets the spot light not only he deserves but that we as fans deserve. He has been such a successful character in so many different roles over the last seven decades. Bruce not only needs a Robin but specifically he needs Dick Grayson, he brings out the humanity in Bruce unlike anyone has before him. I truly believe that any slightly normal relationship Bruce/Batman has had can be accredited to the quirky kid who lost his parents under the big top that terrible night. Dick showed Bruce that even if you lose everything you don’t have to let that lose take away what makes you you. Bruce sometimes gets lost to the Bat persona, but Dick brings him back. Dick explained it best himself, “ I used to think he was more real as Batman than as Bruce Wayne…but because he can’t just be some cold super-hero around me, I think Bruce is becoming more real too. Look, I know what we’re doing is important, but it’s not everything. Mom and dad always taught me to enjoy myself, I think maybe I’m helping Bruce to enjoy himself, too.”

So listen DC give us a Dick Grayson not only for our sake but for Bruce Wayne’s sanity! Do you think Scott Eastwood is going to be Dick Grayson? Only time will tell, Suicide Squad hits theaters August 5th, 2016.

Home » Movies » Will We See Dick Grayson In The DCCU?