Netflix’s Daredevil has brought mainstream attention back to the Marvel vigilante. The 2003 movie staring Ben Affleck and Jennifer Garner is in the ranks of the worst superhero movies along side the likes of, Catwoman, Green Lantern, and the Fantastic Four Reboot. When  Marvel announced they would be turning the title into a Netflix series everyone was a bit worried, the legendary hallway scene put all our worries to rest. Since that moment we have been riding the Marvel Netflix wave! 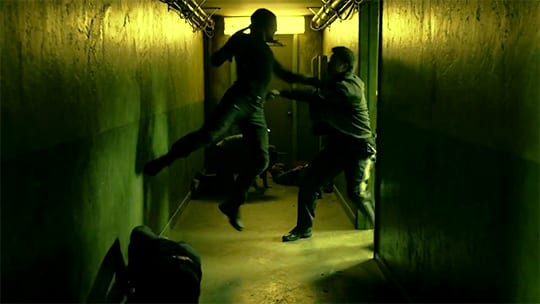 One of the best parts of season one of Daredevil was Vincent D’Onofrio’s portrayal of Daredevil’s arch-nemesis Wilson Fisk better known as Kingpin. His absolute brutality paired with his dapper style and for most part steady voice was unnerving at times. What most people don’t know is that though Fisk is known as Daredevil’s rival he made his first appearance in 1967’s “Amazing Spider-Man”#50 and remained as one of Spider-Man’s foes until he met the Devil of Hell’s Kitchen in 1981. Since the announcement of Spider-Man: Homecoming and the recent announcement of Micheal Keaton joining the cast the internet has been abuzz with hopes and dreams that Fisk would make an appearance in the upcoming Spider-Man film.

If this were to happen it would the the first time we saw a Netflix character cross the divide to show up on the big screen. D’Onofrio waded into the internet rumors himself to say that though it seemed like a cool idea it was news to him. 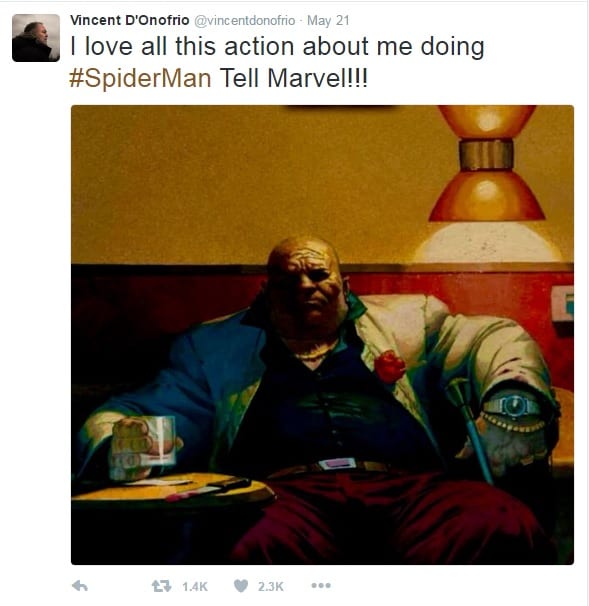 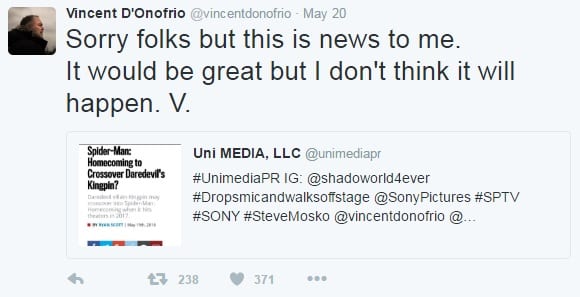 Can the power of the Marvel fan base get Kingpin into the Spider-Man film? My thoughts are that they would have to seriously water down the character to make him suitiable to appear in the most kid friendly Marvel title. Peter Park is young, pitting him against someone as brutal as D’Onofrio’s Wilson Fisk may be a bit mature for the target audience. Anyone remember what Daredevil looked like after his fight with Kingpin? I think Murdock is a better suited foe for Fisk, but I have some bias as I like my heroes main power to be able to take a beating and get back up, which Matt Murdock has in spades. No matter which way Marvel chooses to go Spider-Man: Homecoming which is set to come out July 7th, 2017 will be amazing and Daredevil will continue to blow me away.