The MCU has had its fair share of uncertain plot points: Did Loki take the Asgardian throne because he killed Odin or did Odin die/ disappear by some other means? How canon is The Incredible Hulk? Does Vision materialize those sweater vests like he did his cape or does he actually go shopping for them? Well thankfully James Gunn just cleared up one of the big ones – or maybe it’s the smallest.

After getting into a discussion about how bringing ‘sacrificed characters’ back to life lessens the impact of their sacrifice, James had to address questions about Groot’s apparent sacrifice and rebirth at the end of Guardians of the Galaxy. Now in case you don’t remember, at the end of Guardians of the Galaxy, Groot used his body as a shield/ shell to protect his friends from the impact of a crash-landing ship. Afterwards, Rocket took a remaining twig from Groot and tried to regrow it – resulting in a smaller version of Groot which then began dancing in the pot at the end credits. So is this the same Groot? Well according to James Gunn, no.

“Although I don’t necessarily think it’s obvious in Vol. 1, it’s important to say that if you exploded and a little glob of you started growing into a baby, I would not assume that baby was you… I do think it’s more obvious in Vol. 2, as Baby Groot has a different personality than Groot, none of his memories, and is much, much dumber.” 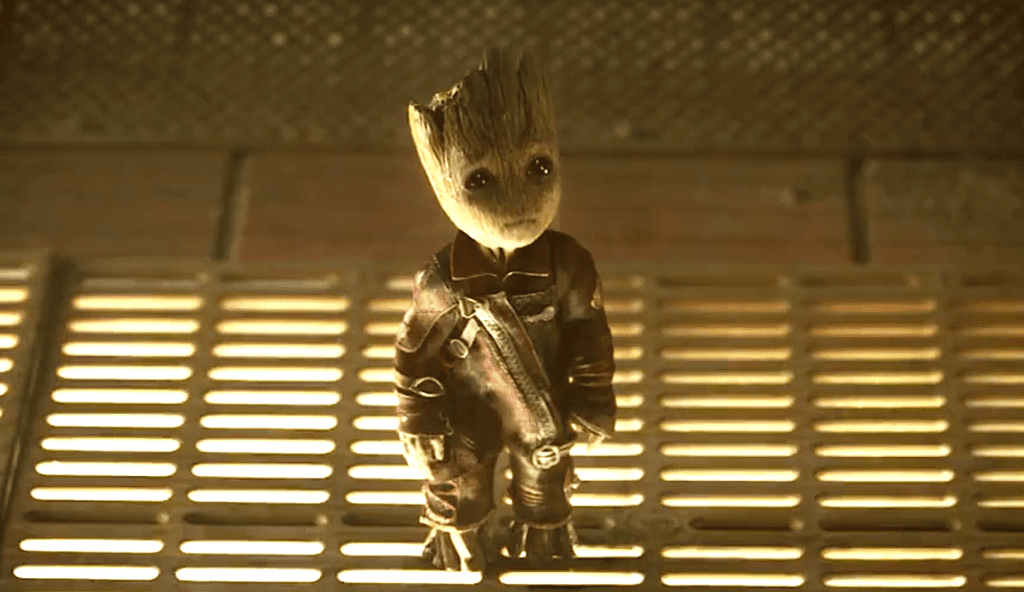 “If you exploded and a little glob of you started growing into a baby, I would not assume that baby was you”

Not necessarily…. There are many instances in media of something exploding and the remnants still being the original. For example, take Cell and Majin Buu from Dragonball Z. These are two villains that were blown up multiple times and could regrow into their original forms from their tiniest particle. Hell, just think of Deadpool, who has regenerated from almost nothing at times. Seeing a left over limb (or twig) and watching it grow into a full being is regeneration, and that usually means it’s the same being. Now if Gunn had made Rocket find a seed instead of a twig, then that would change everything. It’s no longer regeneration, and now much easier to see that Baby Groot is actually Groot Jr (aka Groot II).

Additionally, in Guardians of the Galaxy, there was a deleted scene that showed grown up Groot dancing and Drax looking at him very disapprovingly. In an interview, Gunn said that this added context to the post credits as Baby Groot stopped dancing in front of Drax because he thought he would kill him for dancing. BUT WAIT, this shows that Baby Groot does have memories of his former self. So did Gunn just contradict himself? Yes and no. This scene does indeed show that original Groot and Baby Groot are the same; but it’s a DELETED scene. Scene deletions can be done to save time or because it no longer fits with the film’s direction. If Gunn cut this scene, it’s clearly because he didn’t want that connotation in the post credits.

In the end, I’m really happy Gunn clarified this. Though it could have been prompted a little bit better. Gunn was talking about a real issue with how sacrifices in TV/ Film seem to be lessened when the person is revived. Hell, I love Phil Coulson but that scene in Avengers will never have the weight it had when I first saw it. Though calling James Gunn out for potentially reviving Groot is a very misdirected target. It’s not like Michael Bay was bashing Hollywood films for relying on explosions more than story elements. Gunn is an incredible filmmaker and we could certainly use more like him!