Since Bungie and Activision first announced their split back in January, people have been wondering what a Bungie-lead Destiny would look like. Sure we had lots of content between then and now, but that was still stuff that Bungie had worked on with the Activision team. Where would they go once all that concluded? Well today Bungie sat down with viewers to not only talk about their upcoming expansion ‘Shadowkeep’, but also talk about what a Bungie-lead Destiny world looks like in the larger scale.

All in all, Bungie gave us some pretty exciting news and the changes to HOW we play look the most promising for both existing and new fans. So let’s break down everything we learned – and WOW there is a lot – as well as what we can get excited for moving forward!

Bungie outlined 3 guiding principles of sorts as they move forward. The first of which is to “create an awesome action MMO”. Now MMO is a term they’ve tried to distance themselves from in the past since it comes with certain connotation; but now they’ve decided to fully embrace that and all it entails. So what does this mean for Destiny as a game series? Well for starters, it means they’re improving the RPG elements and are looking to add a lot more customization in terms of our characters. This doesn’t only apply to adding back in a lot of stats we had in D1 but also improving how we make our characters look and feel!

The best example of this was the subject of armor. It’s unclear if this will be happening in ‘Shadowkeep’ or is more of a long-term goal; but Artifacts will be re-added to your Character sheets and will provide some pretty powerful bonuses as you unlock them. Additionally, you will no longer have to choose between ‘looking good’ and ‘playing well’ as armors will now have their look and functions separated to an extent. This means that if there’s a set of perks you really like for an armor, you can now add them to the armor piece you really like the look of!

Another big point of their MMO principal is improving the social aspects of the game; but those changes are best explored in the next part.

Moving forward, Destiny is about to become a much more social game because Bungie is changing the way you can play with your existing friends and new ones. They don’t want players feeling like they’re stuck on one console because it’s where they started. Bungie is opening up Cross Save, which means that players can move their character to whatever console works best with their friend group. Now it’s important to note that this isn’t ‘cross play’ and it’s also uncertain if you can transfer characters from console to console once OR if it functions like “hey, I’m away from my PS4 this weekend but I can play on ___ instead”. Though the addition of Google Stadia as a partner will help things tremendously. (Speaking of Google Stadia, if you’re wondering if they’re the new Activision in this equation and will cause ‘Exclusives’… No! They will help with development, but creative direction is all on Bungie. As for Exclusive Content, that is gone! All consoles will have access to the same materials moving forward.) 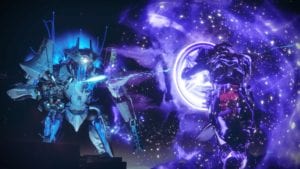 Another big aspect of Destiny being “playable anywhere” is also it being playable “by anyone”. If you’re new to the franchise, you won’t have to worry about going through hours upon hours of past content just to catch up with your friends. Bungie is implementing a new feature called “New Light” and will allow players to immediately jump in with all Year 1 content available FOR FREE!!! That being said, ‘Forsaken’ Content (stories, dungeon, raids, etc) will cost you; but other end game activities from it like Dreaming City, Blind Well and Gambit will all be available for “New Light” players from the get go. As for Power Level, it’s not 100% confirmed yet, but Bungie said they’ll most likely new players starting at 750 power to keep things even with their existing player friends.

As for how DLC will be treated moving forward, it’ll all be ‘a la cart’. For example, say you aren’t really pumped about Season 9, but Season 10 looks REALLY promising. Well you can just buy Season 10 when it’s coming out. No more buying a pack of DLC before you know what they are or what they entail. You can literally start playing a season and if you decide you want to get some of that premium content, you can add on that Season! And then when next season is coming, you can make that choice again.

The final guiding principal Bungie is taking with them is creating a “single evolving world”. What this means is that they want players to feel like they have an impact on the world around them. A sample of this was seen with the ‘Forsaken’ expansion in how players completed the storyline which led to the raid, which then caused a 3 week time-loop cycle to begin. Future expansions will try remain faithful to approaches like these, and ‘Shadowkeep’ will be the first venture into that as we return to the Moon to face Nightmarish-versions of some of our greatest fallen foes. Crota, Gaul and other enemies from Destiny 1 AND the start of 2 will be making a comeback.

Some might see this as recycled content, but it’s better described as re-imagined and upgraded content. The moon is someplace we haven’t visited in quite some time and ‘Shadowkeep’ will explore how it changed and (from a gameplay perspective) will give guardians a map twice the size of the original and will bring an eerie feel to Destiny 2 that we haven’t seen yet. Additionally, we will get installments of lore-heavy in-game snippets in ‘Shadowkeep’ similar to what we got for Mara Sov in ‘Forsaken’. Where this expansion will go beyond this remains to be seen; but if fans react as favorably to this as expected, there’s a chance we might see more fan-favorite content be updated and revitalized for D2 – *crosses fingers* please revisit Vault of Glass!

But what are you most excited for in Destiny 2’s future? Sound off in the comments and let’s get ready for an awesome Fall!