Netflix released another Original movie August 25, 2017, ‘Death Note’ that has social media all up in arms in disagreement.

‘Death Note‘ is a famous Japanese’s manga series written by Tsugumi Ohba and Takeshi Obata. For fans of the series even though they are enjoying the movie they feel they are pushing too much of the series into a short film.

However, for someone who has never even heard of a Japanese Manga, yes, I know please don’t be shocked but I am a very uncool person, I really enjoyed ‘Death Note‘. 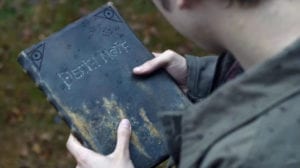 Netflix’s ‘Death Note’ is the English adaptation of the manga/anime series. ‘Death Note‘ introduces us to a teenage boy Light Turner portrayed by (Nat Wolff), smart kid who is often bullied and wronged by the world until the power to change that fate lands in his hands by a dark evil twist of fate. Light becomes the owner of the Death Note a supernatural notebook of death that he can control the death of anyone who comes into his path if he knows their face and name. At first, Light see’s the Death Note as a gift from Ryuk the Death God (William Dafoe) even bringing in his new girlfriend Mia (Margaret Qualley) into his power trip as he became Kira. With the help of Mia and the Death Note, “Kira” becomes a vigilantly trying to rid the world of the scum, the bad guys who got away with their crimes and those who the duo felt deserved to die for the wrongs they had committed.

However, soon Kira’s actions draw the attention of FBI Agent known only as “L”  played by (Lakeith Stanfield) who comes to town mysteriously investigating the Kira case. His face remains a mystery just like his name during most of the movie until he realizes that Light is actually Kira. At the same time Light realizes that Ryuk and the book are more of a curse than a way of righting the world it is too late.

However, before Light can change his mind about the Death Note he has to get “L” out of his way which means using “L”‘s right-hand man Watari (Paul Nakauchi) to learn his real name for the Death Note, however, Watari dies which sends “L” over the edge.

Meanwhile, Mia decides she would be a better owner of the Death Note and plans to take it from Light by killing him but Light has plans of his own. With a plot twist that those of us who didn’t know about the Japanese manga series never saw coming. Ryuk’s comment that “Human’s are so interesting” that leaves the viewer hoping for a sequel. So if you are a fan of the series I say watch it. If you have never heard of it until now I definitely recommend watching it if you are into the whole Final Destination vibe…

Home » Reviews » What Would You do With the Power of the Death Note?