Back in March we reported that the creators of the canceled Cartoon Network show Young Justice were hopeful the show would be revived on Netflix. The first season had been streaming for a while before they added season two. The creators of the show and the add in comic series urged fans to watch as much Young Justice as their little nerd hearts could take. Yesterday it became news that a reddit user said he spoke to Peter David, a writer for the series at Connecticut’s TerrificCon. The user said that David spoke to him about taking meetings with Netflix in regards to creating a 3rd season of the wildly popular show, and the fan boys and girls rejoiced!

That is until the news got back to Mr David himself… in his own words “Yeah, that’s a total misquote. Meetings are just wishful thinking at this point.” and “Completely incorrect. I said I had lunch with Greg and he said Netflix was thinking about it. That’s all.” The Greg he is referring to is Greg Weisman another writer for the show. So this like so many other things on the internet was some random poop head giving us all false hope. The good news is that in the actual tweet from Peter David he said that Netflix was thinking about it, so that is a sliver of hope in this sad story of internet rumors. It looks like Peter David is getting a little sick of the questions, 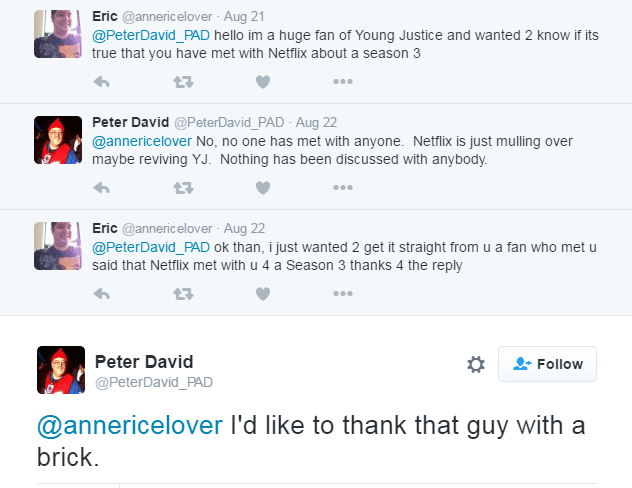 So this is a story about sources, when running with a headline it is important the source isn’t some random person on Reddit. As this person will raise the hopes of a group full of fans who has been dying for resolution to the end of season 2 only to have it dashed once again. All we can do at this point is keep turning Netflix on and continuing to watch seasons 1 & 2 and then cry when its over, because if you don’t cry at the finale of season 2 we can’t be friends!

Home » News » What is Happening With Young Justice?