Welcome dear readers to this weeks What I Love Wednesday. This week I want to explain my love of ‘The Walking Dead‘. I started down this path of obsession with ‘The Walking Dead’ at the end of season two just before the season three premiere. My children had been after me to watch it with them, but I just could not get on board with a show about zombies, so I fought it kicking and screaming. I broke down and watched season one on DVD then next thing I knew I was on the hunt for season two at the local video stores (for those who don’t what that is this is like a Redbox but it was an entire store and we called it Blockbuster). We finally found it and binge watched it (before binge watching was cool) so when season 3 started I was addicted. 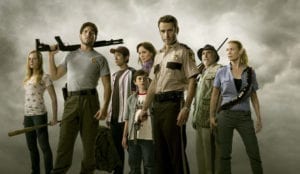 I have enjoyed shows in my life but not like my obsession with ‘The Walking Dead’. I am asked often why I watch such a morbid show about zombies. It is simple really, it is not about the zombies at all. I describe it as a soap opera with zombies thrown in here and there. I know I speak for all fans when I say we watch it for the characters. I personally wish the world could become more like our heroes on ‘The Walking Dead’. Our group of heroes come from every race, religion, sex, sexuality, education and professional background and even in the darkest time of in the world, they found each other and became a family. They will and have died for each other because of that family bond. In a world that seems to have ended, they found each other and that is truly a beautiful thing. I wish as a society that someday we could all come together no matter our background, race, career, sexuality or religion and just become a family. I do not believe a zombie apocalypse is coming, but I do believe the zombies represent the ugliness in our world today. The zombies represent the hunger, homelessness, war, violence and hate. If we can come together and fight together like our heroes in ‘The Walking Dead‘ then maybe just maybe there will be hope for the world. 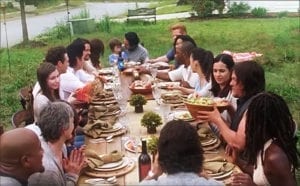 The best example of this comes from season two seven ‘Pretty Much Dead Already’. The exchange between Maggie and Hershel, when he tells her that Rick and the others have to leave and she looks at him and says “A new command I give to you, love one another as I have loved you. That’s what you told me, right?” That scene is something I carry in my heart every day. It is those moments that make me love this show.

My family and friends will tell you that I may be “obsessed” with the show. From collecting anything ‘The Walking Dead‘ related, my theme song ringtone and even my Walker Stalker Conventions. Prior to ‘The Walking Dead’ I had never enjoyed anything enough to even consider attending a convention but my obsession leads me to Walker Stalker Con in 2015. To be under the same roof with 50,000 other Walking Dead fans is an experience like no other. To be able to connect with someone you have never met, just by quoting a line from the show or discussing past episodes is awesome. ‘The Walking Dead‘ fandom is like no other, we are passionate, fierce and loyal. 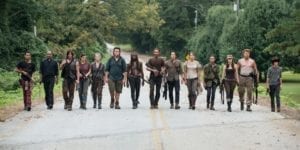 I will say this as the show goes on we grow weary but true fans do not give up. As the deaths get harder for us to bare, the fact that we know that in this show we will eventually lose the characters who we have come to love dearly we still watch every week. True fans care not about ratings or what the critics tell us what we should think. We watch each Sunday night on the edge of our seats, worried about the death that surrounds the characters, the struggle they are dealing with the villain at the moment and the ongoing risk of getting bit by the rising number of walkers. We worry when they worry, we cry when they cry, we cheer when they fight and when they finally when they win The Last Stand we will scream and shout but deep down as with this show there is an even worse evil just around the corner…..

Home » Fun » What I Love Wednesday: ‘The Walking Dead’!