You may have heard the world multiple times, especially in movies like The Internship or Ted 2, as it is a word and an activity that is well known in today’s society. Cosplay. Well, for those of you who do not know what ‘cosplay’ is, according to Meriam Webster, it would be defined as the following:

the activity or practice of dressing up as a character from a work of fiction (such as a comic book, video game, or television show)

While the definition of the word is seemingly crystal clear written down in black and white; there is much more behind it. This isn’t your typical running out to the store and finding a costume you like, throwing it on and walking around a convention floor. Every year, cosplayers all over the world dedicate thousands of hours to making the perfect cosplay for that next big convention. To some people this may sound a bit silly, but to a cosplayer it is everything.

I’ve been called a kinds of things because I’m a cosplayer. A freak, a weirdo, a crazed fangirl… just to name a few. Perhaps all of these things are true. Maybe I do spend way to much time perfecting my cosplays instead of going to catch up with some college friends. I am weird (as a matter of fact, that is why my DM for Amazon told me that he hired me!), and I certainly am a crazed fangirl. We all have our favorite fandoms – everybody loves something. 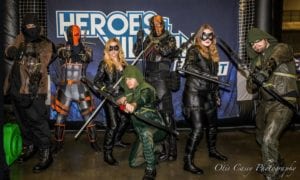 I guess you could say, getting into cosplay gave me a sense of confidence. My very first cosplay was a female Green Lantern, and let me tell you – it was anything but movie worthy. It was a green lantern t-shirt, green shorts, and I painted a green mask to ‘cover’ my eyes just like Ryan Reynolds had in the movie. Of course, I naturally donned the iconic Green Lantern ring. It just simply tied it all together. The next time I cosplayed was as a Death Eater for the midnight showing of Harry Potter and the Half Blood Prince. Well, to my surprise, there were a lot of other people that were dressed up for that movie also. It was seemingly just an instant conversation starter. People complimented each other and shared some laughs over their favorite book turned movie series.

For those few hours, I was no longer the girl who got bullied from middle school until my freshmen year of college – I was a person who was making connections with people. From that point forward, I started taking  my ‘Halloween’ costumes a bit more seriously. Eventually I found myself at my very first convention, which was called ‘Shore Leave’ in Baltimore, Maryland. I went as a ‘Tin Woman’ – which was a gender-bent version of Neal McDonough’s character in SyFy’s Tin Man.

From there on, I started getting more divulged in my cosplays. I’ve done everything from Black/White Canary to Hawkgirl and from a Lady Jason Voorhees to Lady Deadpool. My closet is full of at least twenty five different costumes – and that is not including all of my masks and wigs either. If I told you how many of those I had, you would probably cry for me and my wallet.

A fatal mistake that I learned one year was to try your complete costume on before wearing it to a convention. My very first version of Hawkgirl consisted of an extreme amount of Worbla armor, in addition to six foot wings on either side. Walking through a convention floor with armor by itself is a challenge when it is extremely crowded – but doing it with wings is near impossible. My dad and my best friend Sarah had to walk behind me the entire time and had to keep pulling my wings in everytime I walked through a crowd. I totally bought him lunch that day to make up for it though! 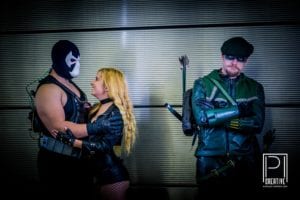 So, why Do I Love Cosplaying so much?

Ever since I started cosplaying, my life has completely changed. I have made so many new friends that have been some of the most amazing people in my life. I have made so many memories at all the different conventions I have been to, most notably Heroes and Villains/Walker Stalker and Monster Mania. I have had the honor of meeting and sharing moments with some of my favorite celebrities. I will never forget the time I first dressed up as Caity Lotz’s version of Sara Lance where she was The Canary from Arrow Season 2. I dedicated enormous hours to stitching, cutting and gluing and to have her eyes light up and say ‘you could be my stunt double!’ was a moment I will truly never forget.

I met the love of my life through cosplaying, which has grown into something beautiful on its own. Our most ‘notable’ cosplay is Hawkman and Hawkgirl, and after wearing it to a convention a few times – we have been asked to come visit kids recovering in hospitals who would love to meet some superheroes.

Seeing a small child’s face light up when they see you dressed as some of their favorite heroes is something that you can never truly forget. I remember meeting the Pink and Red Ranger growing up, and I was so excited and happy that I did not stop talking about it for a week. A Power Ranger visiting ME in Philadephia, PA?! How cool!

I love cosplaying because not only has it brought some many wonderful people in my life, it has also brought out a confidence and a part of me that I never knew existed. Without cosplaying, I never would have began writing for Fan Fest News, I never would have met my boyfriend and I would still be that shy little girl sitting in the corner at the coffee shop reading my FanFictions and dreaming of a better world. Okay, I’ll admit, I still kind of do that last one on occasion. What can I say, I have been reading those fun fandoms since the Quizilla days!

If you have never cosplayed before, have thought about it, or are looking for somewhere to start – I highly encourage you give it a shot! You don’t need a gigantic show-stopper to be a cosplayer! Just a fun spirit and a whole lot of nerdness!

I am certainly proud to be, and forever will be, a dedicated cosplayer! 🙂 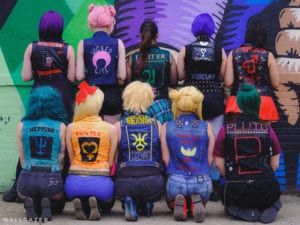