After a highly anticipated season 6 opener of American Horror Story ended, some fans were left more confused than they were during the 20+ teaser trailers that were released over the last couple months to keep this season’s theme a secret.  There were many twisted 30 second looks into some of the most popular urban legends and haunted tales we’ve all heard before but none truly prepared us for what we watched on Wednesday evening.

‘My Roanoke Nightmare’ is the theme and it’s set in a documentary type method of storytelling as the tale of two people, Matt and Shelby is reenacted in front of you.  There are ‘talking heads’ narrating a story and if we go by true documentary method – two actors are portraying the events of Matt and Shelby; but this is America Horror Story and it is born from Ryan Murphy’s mind so do we really know anything at all? Perhaps Matt and Shelby are the talking heads but isn’t it also possible that the couple never made it out and they’re all people hired to tell the terrifying narrative? 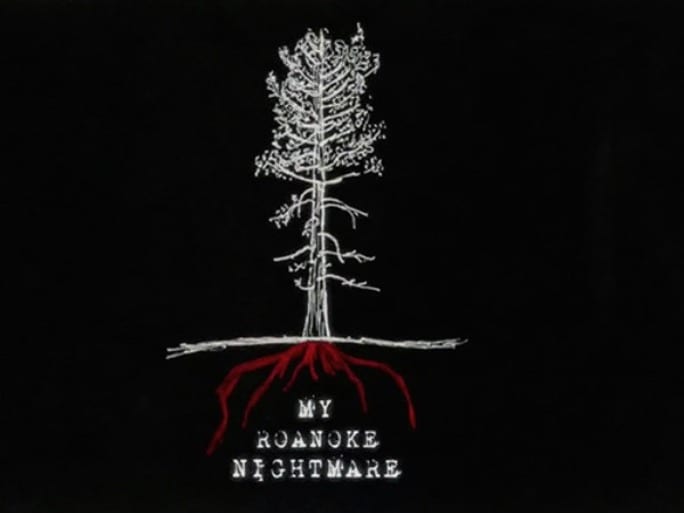 One thing fans are almost positive about is that ‘My Roanoke Nightmare’ is going to be somewhat tied to the Lost Colony of Roanoke and that story is quite a frightening tale. In 1587, more than 100 people were led by John White to build a permanent colony on Roanoke Island.  John then left to go gather supplies and return with them soon but a Naval war changed “soon” to almost three years. Upon John’s return, the colony was absolutely wiped out, there was no trace at all of the settlers.  What he did find was the word ‘Croatoan’ carved into a post as well as ‘CRO’ into a tree trunk. Croatoan was the name of a neighboring island and one widely accepted theory was that the colonists were killed by the Native Americans that inhabited it.  Another theory states that archaeologists found remains that led them to believe that the colonists split into two groups who then blended with the Native American tribes.

The mystery of the lost colony has never been solved but more clues have been found that at least cement that the colonists didn’t vanish into thin air – at least not completely.

This theory was also seemingly backed up by the attire of one of AHS’ powerhouse actresses in every season. Kathy Bates, who’s character name remains unknown, gets hit by the car that Shelby is driving but she walks away unscathed and of course (why???) Shelby follows her into the woods where she’s surrounded by people carrying torches.  This isn’t the first time the men with torches were seen in the episode but when you notice their attire and the look of the area Shelby is led to, the colony theory is further cemented.  In another hint that this is about the lost souls of Roanoke comes from the preview shown online after the episode aired where Kathy not only speaks (with an accent) but uses the word colony and promises to protect it.

While it’s still too soon to tell if this is the storyline we’ll see play out all season, or if this could be just one of many “true american horror stories” to come, it’s definitely interesting seeing this connection to real historical events.  If your own interest was peaked after AHS aired, you can find out more about the colony by visiting The History Channel’s information on The Lost Colony of Roanoke.

Although we’re sure from watching that clip, Kathy’s character will be telling us everything we need to know on Ryan Murphy’s wicked spin on the fate of the colonists of Roanoke.