Lets all agree we just had our minds blown, and even as they were being blown we are still confused.

The shorter story lines in this episode go something like this:

Teddy is killed so he can be… rebooted?  The MiB is knocked out the strung up and left to figure out how to escape when he wakes.  He does managed to cut himself loose.  Once he’s free Charlotte pops up lobby for MiB’s vote against Ford.  He brushes by her saying that he doesn’t care if Ford is gone, it’s not Ford’s narratives he wants and then disappears for the rest of the episode. 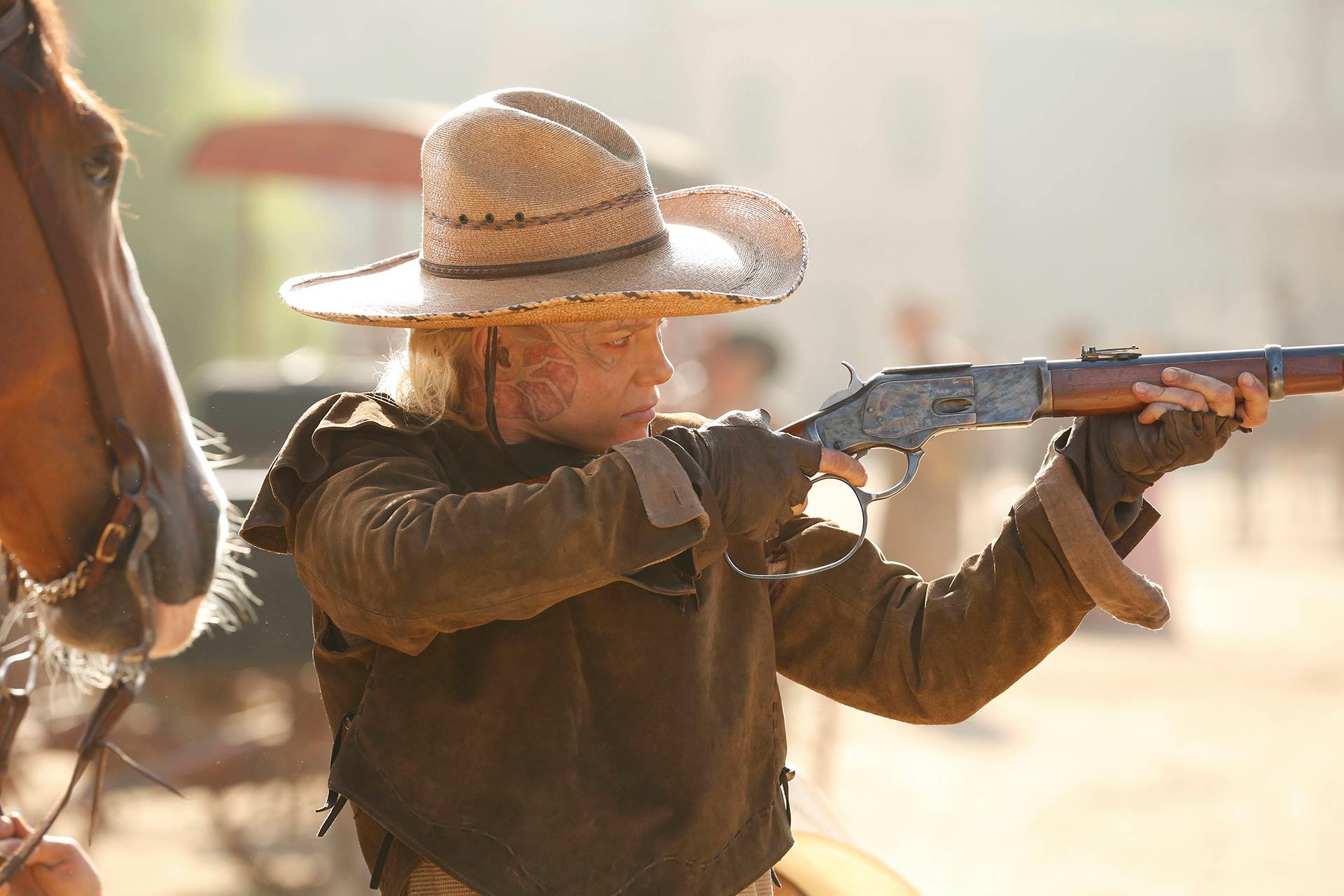 Maeve is back in head quarters after being captured for being the center of the story lines she played with.  Bernard is looking into her code (Bernard was certainly back to being more human), and just as he is shocked by her access she stops pretending to be the complacent host. She grabs his hand and says “we’ve been down this road before”.  She makes Bernard clear her and as she goes to recruit Hector, Bernard is off on his own more complicated adventure.

Now it gets real.  There are a million and one things to talk about in this episode but some of it is still a mystery so we’ll cover what we do know.

Logan has made himself the head of a  militia group and has Dolores and William tied up. Logan is mad at William for getting too involved and forgetting about his sister.  He waves a picture of his sister at William and we can see it is the same picture Peter Abernathy found in the dirt at his ranch.  Logan threatens Dolores, she grabs a knife and strikes him across the face with it and actually cuts him!  Does this mean Dolores can hurt humans in the park?  The ramifications of this seen are still unknown.  Dolores then takes off and escapes.  Logan and the others try to find her, unsuccessfully.  With Dolores gone is seems as though William and Logan come to terms and patch things up.  That’s what Logan thought anyway.  In the morning he finds his militia slaughtered by William who tells Logan he finally knows how to “play the game”.

Dolores then suddenly finds herself in the buried town.  Is that what was excavated?  The last scene makes us believe the town has been unearthed.  Before the last scene though, Dolores sees other Hosts in the pews, we recognize many of them but we don’t know why they’re there.  She gets into a confession booth (also and elevator) and goes down into the bowels of the church which is apparently an old headquarters.  She goes to an interview room and sits to wait.

Long story, short.  Bernard meets Ford in the back room of the storage bay for all the dead hosts.  Bernard has hacked Clementine’s samaritan code and tells her to shoot Ford if he tries anything or doesn’t do as Bernard asks, and Bernard is asking to remember.  He makes Ford give him his memories back: how and who created him (Arnold or Ford?), who he has killed (Elsie and Cullen), his sons death (his cornerstone) and interestingly, Maeve’s death – the one MiB facilitated, the one where the maze showed itself to him. There is a lot of talk between Ford and Bernard and through the confusion we find out, as he sits down across from Dolores, Bernard is Arnold – or is he?

Before we conclude this episode let’s set down what we do know about Bernard.  Bernard is Dr. Ford’s creation and he has been with Ford for a long time.  His 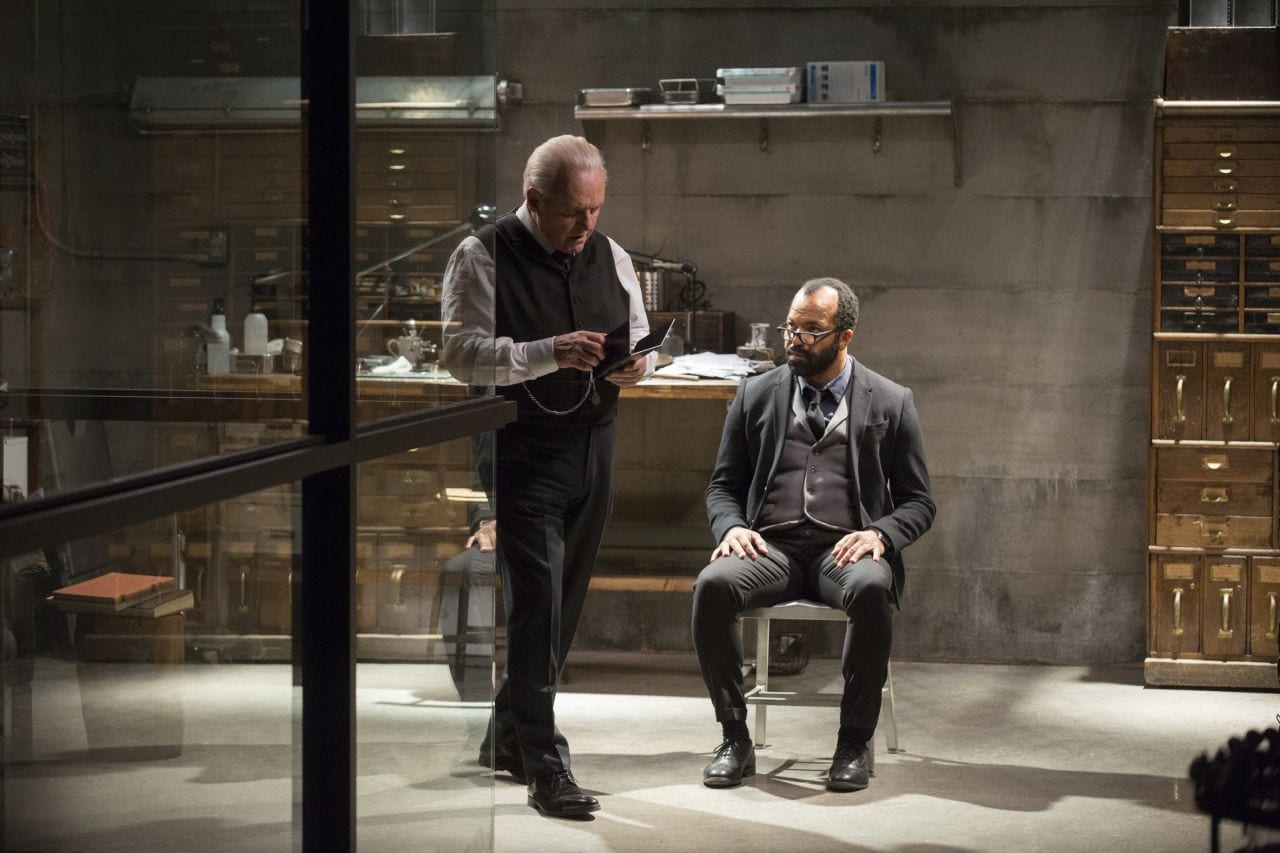 consciousness is advanced, obviously, because he has worked alongside humans without detection.  We also know that perhaps this ‘mutiny’ by the hosts isn’t the first time it’s happened.  Throughout this episode we hear from all different characters, something along the lines of, “this isn’t the first time”.  Dr. Ford even says it to Bernard.  Arnold’s death was at the hand of Dolores but we don’t know why, how or when but we are to assume he is Bernard.  Knowing though, that Bernard is Dr. Ford’s creation, we could theorize that Bernard and his code hold Arnold’s consciousness.  Too big of a reach?

So after all these revelations we are reminded that Bernard is sadly, under Dr. Fords control.  He has a back door into Clementine’s code and Bernard’s.   He forces Bernard to take Clementines gun and shoot himself.  It is a dramatic ending for Bernard, but we can spend this next week hoping someone is going to patch him up and clear him for duty again.

So after Dolores meets with Bernard (and remembers that she is the one who killed Arnold) she returns upstairs into the now empty Church.  She hears someone walking up to the Church door and when it opens she is momentarily relieved until she can see who it is.  The Man in Black.

One last note, this recap can not even come close to getting in everything that happened.  Hopefully, it clarified some of the murky notes and at least amped everyone up for the season finale next week.