Episode three of Westworld was a little… lackluster.  The episode seemed to be setting the stage for greater things and left viewers maybe more confused than before.

As a point of dark humor,Teddy only dies twice in this episode!

On to the semi-chronological summary of this Sunday’s episode, which is going to be quick as it’s filled with questions.  Bernard is having more meetings with Dolores, one at the beginning of the episode and one at the end.  The first one is relatively inconsequential but we do learn of a personal loss of Bernard’s.  We see little of Maeve or Clementine, who is saved by William.  William is spurred by his street fight to go on a bigger adventure hunting criminals.

Elsie and Bernard find a commonality in the hosts that are 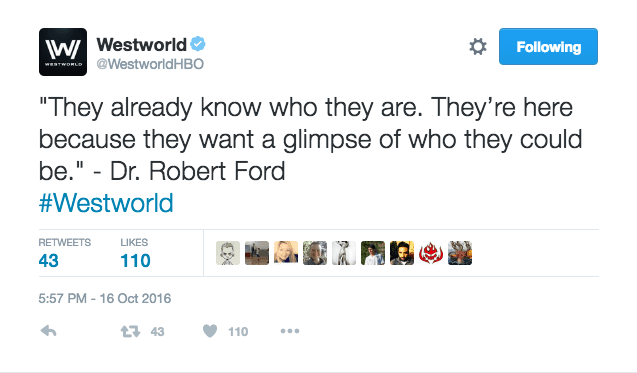 “misbehaving” and Bernard confronts Dr. Ford about it.  Dr. Ford gives the detailed history of his ex-partners dream for creating AI consciousness.  Bernard asks Dr. Ford where Arnold, the ex-partner, is now – he’s dead.  According to Dr. Ford is was covered up as an accident but we don’t get much else for clues.

Dr. Ford uploads a missing back story into Teddy that will fit into Dr. Fords mysterious narrative he’s been creating.  Teddy ends up in a manhunt for this man Wyatt, who is the pinnacle to Teddy’s new backstory.  This manhunt ends in a creepy attack on Teddy and his companions (most of his companions get away), the attackers are disguised Indians? It’s unclear what they’re dressed as other than scary AF.  This is where Teddy dies again, but before they stab him he, being the gunslinger he is, gets off a round into each one but they are unhurt, meaning, they’re humans teaming up into a creepy cult?

Elsie, a programmer, is sent into Westworld with Stubbs (the muscle) to bring in a stray host.  They track him and find a camp where he’s carved Orion’s star map into several wooden objects.  They finally catch up to him in a trench that he can’t climb out of.  Elsie puts him in sleep mode as Stubb’s repels down to saw off his head and bring it in for analysis.  Half way through cutting his head off the host wakes up, knocks Stubbs aside and climbs the rope.  He begins approaching Elsie and when he picks up a rock we think he’s going to hit her over the head but instead hits himself until he can no longer function.

Bernard and Dolores’s final meeting makes us wonder Bernard’s role in the misbehaving hosts.  He eludes that he is the creator of this new behavior in hosts.  He asks Dolores if he should revert her back to her old programming.  He asks her which version of herself she would like better and her answer is there is only one version of herself that she will continue to discover (not verbatim).  Bernard asks her how she came up with that answer and she doesn’t know, unlike the previous times she’s analyzed her responses.

Dolores after her talk with Bernard is put back, again, into her narrative.  As we’ve seen many times she rides up, the cows are out, there are gunshots up at the house and she races towards them.  This time it isn’t Ed Harris waiting for her, it’s a group and we don’t know how many are host or human.  One of them takes her into the barn to be raped, per the story line, but this time Dolores pulls his gun from his hip, shoots him (obviously he was a host) and rides off amid open fire from his cohorts.

As said above, it was a bit lack luster but set the stage for some exciting plots.

As usual there are more questions than answers…

I thought Dr. Ford had a lot of compassion for the hosts and this episode made it seem completely opposite.  So what are Dr. Fords true feelings towards them?  In relation, what are Bernard’s true feelings about the hosts?

It seems that both Dr. Ford and Bernard might or have played a part in this code that is allowing the hosts to act off script.

The host that bashed his head in… why?  Because he was malfunctioning or to keep the programmers from finding the codes that are writing this misbehavior?

Once again, can’t wait till next week.