While the superhero genre didn’t really take off in the mass market until Bryan Singer’s X-Men and Sam Raimi’s Spider-Man premiered in 2000 and 2002, long-time fans of the genre are well aware that Stephen Norrington and Wesley Snipes‘ Blade must never be forgotten.

The action-packed martial arts fantasy horror exploded onto screens only a year after Batman & Robin had tanked as a bankable form of entertainment, and by recouping its budget three times over, it established itself as an instant classic. Almost 25 years have passed since the actor first donned the shades and leather trenchcoat in Blade, yet it is still regarded as a landmark of the Golden Age of big screen costumed crimefighting we currently live in, something that Snipes didn’t miss out on during an interview with ComicBookMovie.

“It’s amazing. In the beginning, my motivation for doing the first Blade project was to have fun and to do something I knew my homeboys and homegirls would absolutely love. The ones from the martial arts world. The ones from the Shaft world, and the ones who love Kung-fu and all that.

We knew that would be attractive to that niche audience, but I had no idea it would have broader appeal. However, it was a good lesson. It taught us what was possible. A lot of things we didn’t imagine because we didn’t have the technical tools at the time, but we have them now. It’s a great time for us and I’m giddy over the possibility of the potential of doing some of the things we had imagined with the tools we now have available with this particular project.” 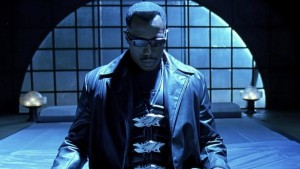 Some fans are still hoping to see a cameo in the Marvel Cinematic Universe’s new reboot. but let’s not forget that Wesley Snipes walked so that motherf*ckers wouldn’t have to ice skate uphill.