Lady Olenna lives! While we were all sad to see the no-nonsense and sassy matriarch of the Tyrell family meet her unfortunate fate on Game of Thrones, we were blessed with a rare sighting of her in Atlanta, GA this past weekend. As thousands of fans flocked to Dragon Con over Labor Day weekend to relish in all things pop culture, one 85-year-old woman decided to bring the cosplay culture to a whole new level.

A photo shared on Twitter showed what may be the coolest grandma ever channeling Lady Olenna with some spot on wardrobe and an Iron Throne wheelchair. Of course, an Olenna Tyrell cosplay would not be complete without a nod to her mic-dropping last words – “Tell Cersei. I want her to know it was me,” which referenced Olenna’s part in King Joffrey’s murder.

Just look at how badass she looks!

Goals: This 85 year old at #DragonCon17. Cosplay for life! pic.twitter.com/jsgfdhEBnU

The other side of her sign read “Not Dead Yet”. 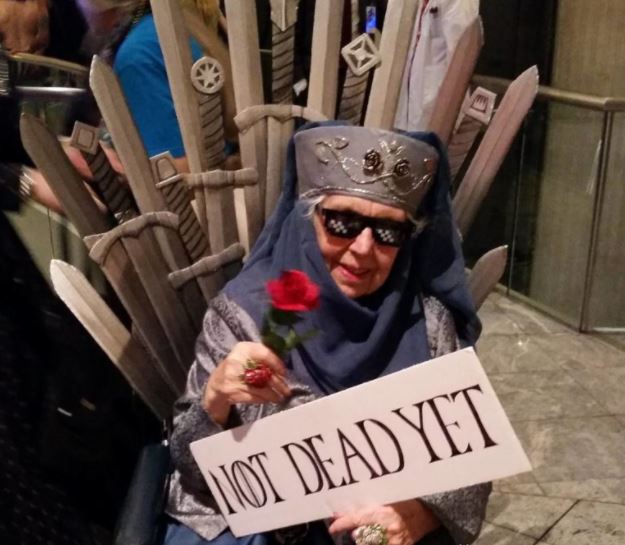 And because this woman and Lady Olenna are savage AF she rocked the “Deal With It” glasses as part of her costume. 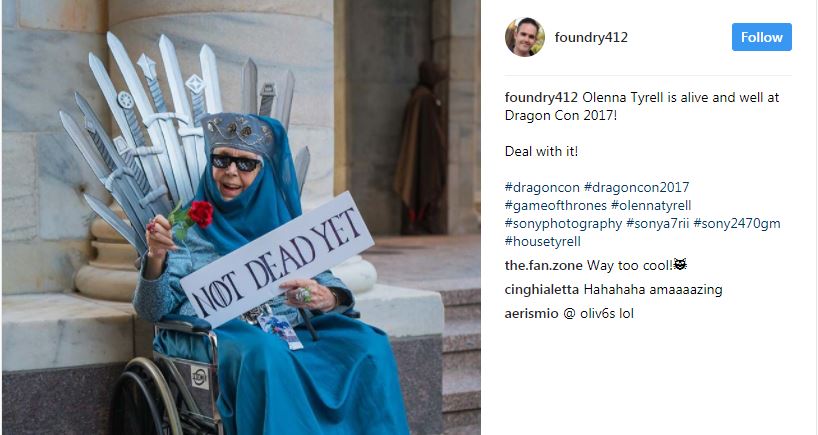 While Lady Olenna is surely missed on the show, we are happy to have this woman stepping in for the part and can’t wait to see all of the other cosplays that she inspires!

‘Game of Thrones’ Review- The Queen’s Justice, But Not That Queen

‘Game of Thrones’: Some of the Best Tweets and Memes from ‘The Queen’s Justice’