It’s finally real! Our favorite little dragon is taking his tiny little dragon feet and pitter pattering right back into our hearts.

The highly anticipated remake of Spyro the Dragon and its sequels is coming to Xbox One and PS4 in mid-November. Now that that’s only a few weeks away, Fandom got a glimpse of what the new game looks like in extended gameplay.

Check that video out here.

In another almost 17 minute long clip, you can watch as the the cleaned up Spyro scampers through the first level of the game, Artisans Homeworld, breathing fire and freeing the same elder dragons. From the lush green cliffs, to the fluffy sheep, its like we’ve been thrown back into our childhood. They did an amazing job with the update, and we can’t wait to actually  get our hands on it.

There are a few changes, though. In the original first game, Spyro was voiced by Carlos Alazraqui, who has a slew of cartoon credits but made his name voicing Rocko on Rocko’s Modern Life. For the following two games, Spyro 2: Ripto’s Rage!, and Spyro: Year of the Dragon, Tom Kenny became the voice of Spyro. He has returned for this trilogy, and is voicing all three versions of Spyro this time. Kenny is famous for doing the voice of Spongebob Squarepants.

The controls are a bit different as well. The rotating camera views weren’t available when the first game was out, so you’ll get all new views of the lands in which Spyro frolics. Toby Schadt, design director on the games wrote on the PlayStation Blog that the level geomtery, speeds and level of accelrations will be the exact same so that you will feel like you’re playing the exact same game.

If you compare the graphics from the video linked above to the ones in the old Spyro, they really are no match. 20 years really brought a lot of changes in the tech world, including amazing, lifelike graphics. (Yep, I said 20 years. Ouch.) 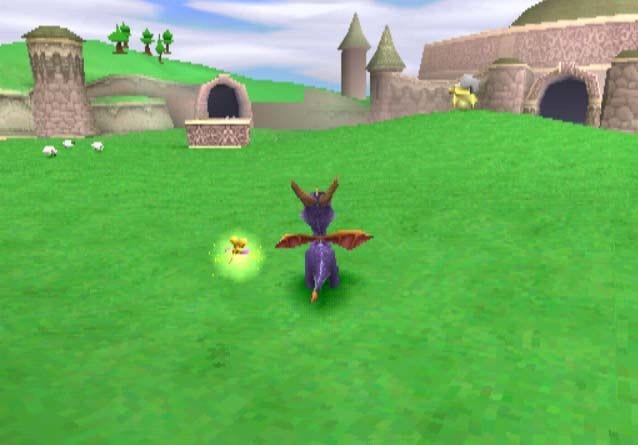 It’s safe to say that there is going to be a lot of nostalgia circulating in the air come mid-November. Until then, we’ll be staring at this game play video on a loop.

You can get the brand new (but also old) Spyro on Xbox One and PS4 on September 21st. If you’re waiting for the game to come to Switch, you will have to wait a little bit longer as that version is still in development.