Want a quick and absolutely hilarious recap of everything you need to know leading up to The Walking Dead Season 7 premiere?  Well, luckily for you, British comedian and acting legend John Cleese is here to help.

This Tuesday, YouTube channel NOW TV released a video narrated by Cleese which walks fans through all 6 seasons, right up to that infamous cliff-hanger ending, where Season 7 will pick up.

Cleese introduces fans to the main characters and touches on their important developments throughout the series, for example, calling the Governor “Patchy Pete”, explaining Carol’s transformation from a meek housewife to a teacher who wouldn’t pass a state inspection (as they cut to the scene where she is teaching the children at the prison about knives) or, saying the character of Rick Grimes is essentially Clint Eastwood but, a bit more sensitive (we totally see the resemblance and, yes, a bit more sensitive is certainly true). 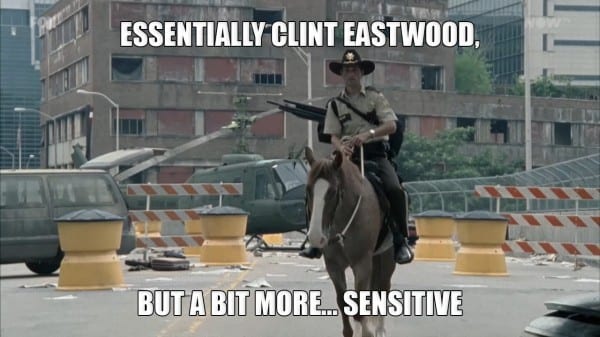 For those who may be new to the series, Cleese walks you through the basic lessons of The Walking Dead universe:

Cleese, who is apparently a huge fan of The Walking Dead himself, spoke about his affinity for the show and what exactly brings him back to watch each season:

“I can’t get enough of The Walking Dead. The beautiful scenery, the emotional depths of the characters, and most of all, the gentle sprinkling of horrific barbarism.”

We guarantee, this is a summary of the series like you’ve never seen before.  Check out the HILARIOUS video and let us know your thoughts in the comment section below.

The Walking Dead returns THIS Sunday, October 23rd at 9pm on AMC.