If you have even dabbled in the world of cult horror classics, chances are you know the line, “Hi, I’m Chucky. Want to play?” 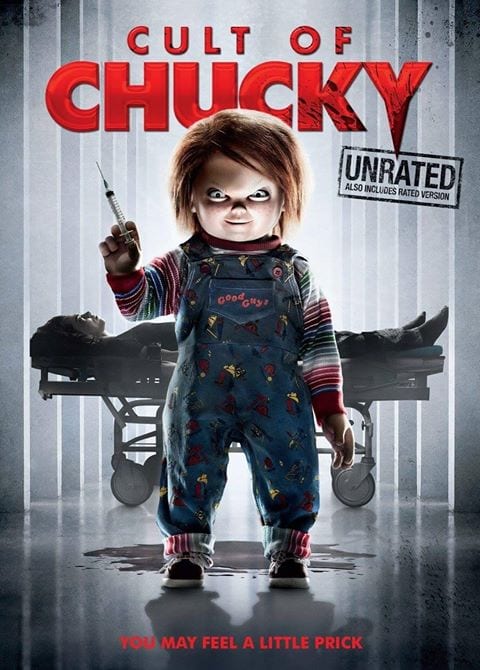 In 1998, the original Child’s Play film hit theaters featuring a terrifying “Good Guy” doll named Chucky possessed by evil.  Nearly 30 years and 6 films later, Chucky is back again.  The Cult of Chucky trailers premiered earlier this week and, once again, the demonized doll is wreaking havoc on his unsuspecting victims.

The trailer is pretty crazy and the red band trailer is even crazier!  Cult of Chucky will be heading to Blu-ray, DVD and digital release on October 3rd of this year and will be a part of Chucky: Complete 7-Movie Collection.

Check out the film synopsis and watch the regular trailer and the unrestricted red band trailer for Curse of Chucky below:

“Confined to an asylum for the criminally insane for the past four years, Nica Pierce (Fiona Dourif) is erroneously convinced that she, not Chucky, murdered her entire family. But when her psychiatrist introduces a new therapeutic “tool” to facilitate his patients’ group sessions — an all-too-familiar “Good Guy” doll with an innocently smiling face — a string of grisly deaths begins to plague the asylum, and Nica starts to wonder if maybe she isn’t crazy after all. Andy Barclay (Alex Vincent), Chucky’s now-grown-up nemesis from the original Child’s Play, races to Nica’s aid. But to save her he’ll have to get past Tiffany (Oscar-nominee Jennifer Tilly), Chucky’s long-ago bride, who will do anything, no matter how deadly or depraved, to help her beloved devil doll.”