Wargroove is a tense and exciting turn based strategy game with a fun story and characters. Developed by Chucklefish, Wargroove features a retro style and tough as nails gameplay on higher difficulty settings. 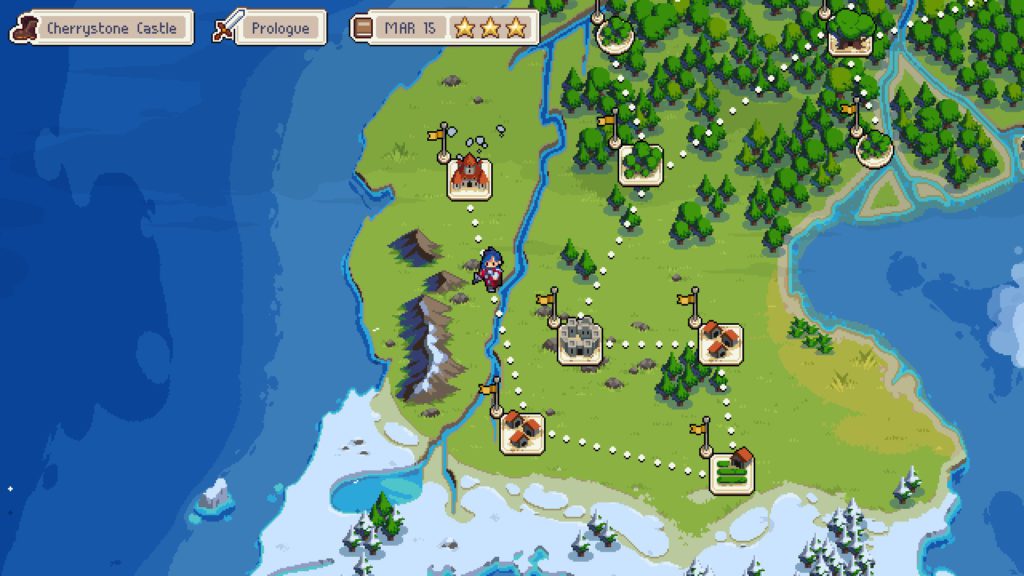 After the untimely death of her father by Sigrid, an immortal vampire, and a siege on her castle by the Felheim Legion, Queen Mercia sets out with her faithful companion Emeric to defeat the evil Valder and restore Cherrystone to its former glory.

Along the way she meets several companions and foes, each pushing her closer to claiming revenge for her father’s death and the secret of “Requiem”, an ancient but powerful weapon. 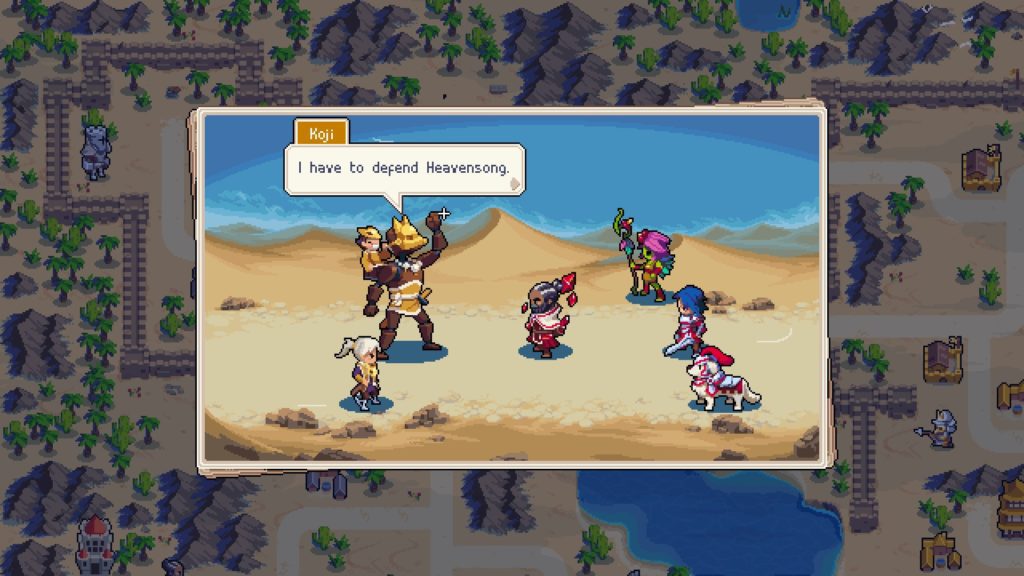 Wargroove’s game play consists of turn based strategy that is surprisingly deep. Maps vary throughout the game and have you fighting on multiple fronts at once. Players will be balancing barracks and capturing castles,  all while fighting on land, sea, and air.

Each battle consists of goals, normally involving taking down the other side’s leader or stronghold, but sometimes switch up to be simply escaping the fighting grounds or reaching a specific destination.

Fights consists of leaders and followers, the leaders being powerful warriors able to take down many enemies in one hit, while the followers can range from simple infantrymen to dragons. While you begin with a set number of fighters, your army will grow as you work your way across the playing field capturing houses, barracks, and docks – each of which awards you with $100 a turn. That money is then used to create new fighters. 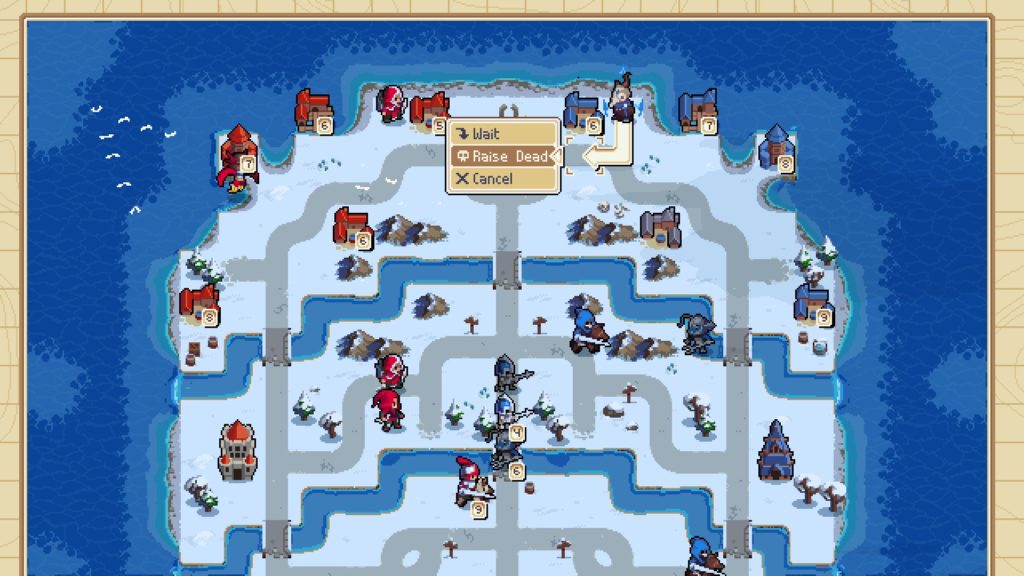 While there are many leaders with their own flavor of fighters, the types remain the same: Sword fighters, spear fighters, battle dogs, alchemists, archers, men on horseback, flying fighters, dragons, ships, catapults, etc. The different styles between leaders gives the various fighters their own flair, even if they essentially fight the same.

Each class has a set amount of steps they can take – or grid spaces they can traverse – in a single move. Some gain bonuses for being near other members of their party, and if you need a slower moving fighter to cross long distances quickly you can enlist the help of a wagon, ship, or hot air balloon.

Leaders have specific skill sets called grooves which initiate after a set amount of attacks. These grooves can change the tide of a battle, allowing some leaders to heal members of their party, set up defensive shields, create bombs, raise the dead, or teleport fighters to their side. These grooves serve to create another layer of strategy to an already dense game and can help maintain party members in particularly grueling fights where creating new fighters isn’t an option. 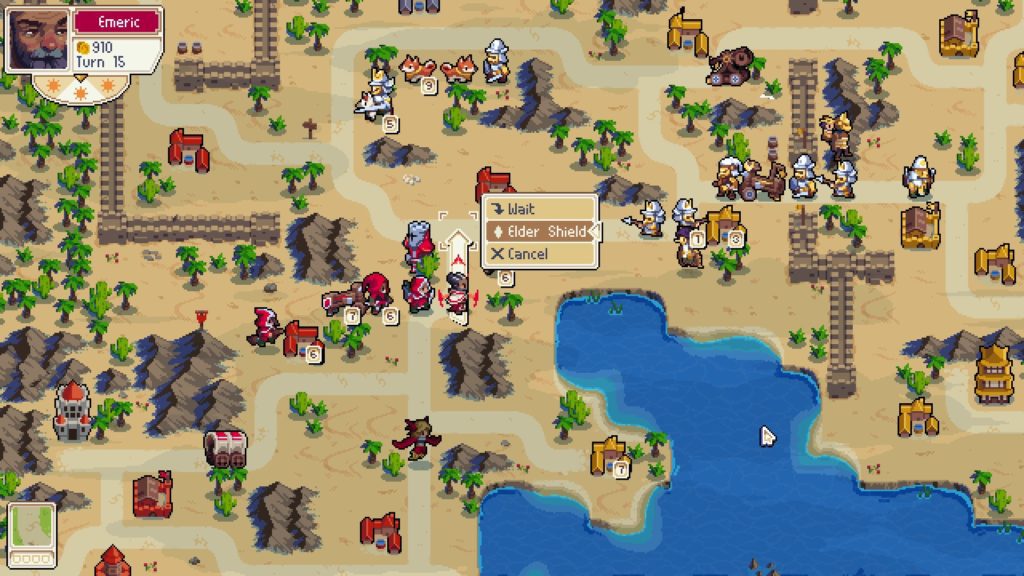 Clicking on en enemy will show you their range, while choosing a fighter and hovering over an enemy will show you both the damage you will deal to the enemy as well as the damage which you will receive in return. Options are available to learn about each enemy type and figure out what they are weak against as well as what is weak against their attacks. This information is extremely helpful and allows players to strategize before moving their pawns.

There is a great variety of levels throughout the game and I was constantly surprised by the shifts in gameplay. While the game never strays from its turn based strategy roots, it does offer a wide variety of mission types to keep gameplay interesting. Side quests, in particular, allow you to head off to quick fights involving characters that the main story doesn’t specifically focus on and have goals not found in the main game, such as recusing prisoners who then join your fight.

Fights are shown in detail, with each fight being animated and featuring some fun cinematics, especially when Caesar the dog is attacking.  The art style and gameplay style is very reminiscent of Advanced Wars, one of my favorite series. 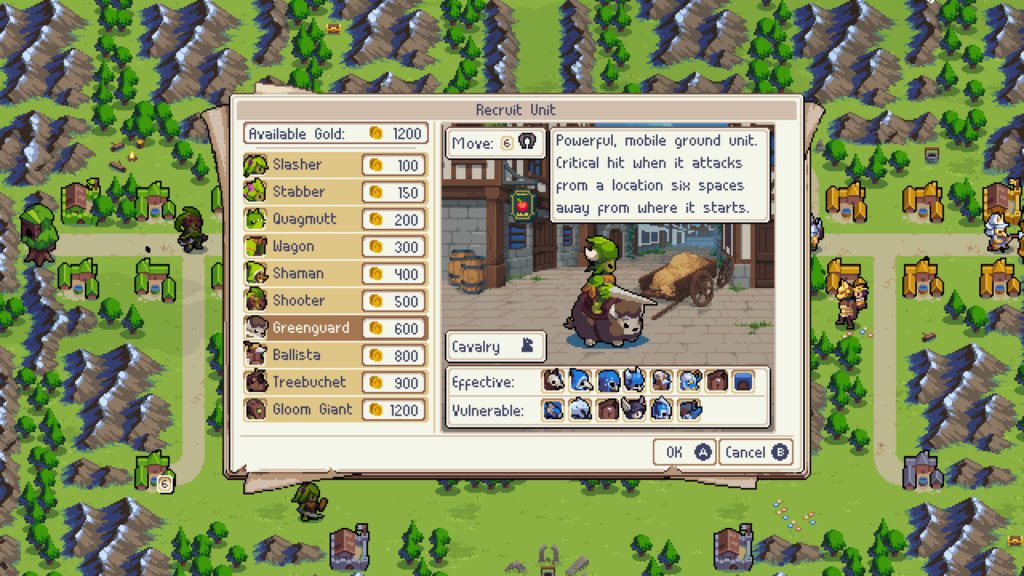 Each fight can award up to 3 stars and the ranking you receive is based on the amount of turns taken, units defeated, units lost, and difficulty level. While the easy mode will allow you to enjoy the story without too much of a struggle, you’ll only be able to earn 1 star per level despite how well you may have performed, which will make opening the ending epilogue impossible as it requires 100 stars.

You move your party along a world map which branches off into various missions and side quests and is set up in a 7 chapter structure. Each chapter has 2 to 3 main missions and many contain 2 or more side quests. Each mission, even on the easiest difficulty, can take upwards of 20 or 30 minutes with some of the later missions on harder difficulties easily taking an hour or more.

The game gradually ramps up its difficulty in a natural way as your progress toward the finish line and I never grew frustrated with the gameplay, despite sometimes being defeated. Like Dark Souls, the only person you have to blame in the case of a defeat is yourself. With enough thought and strategy you can overcome any level on your first try. 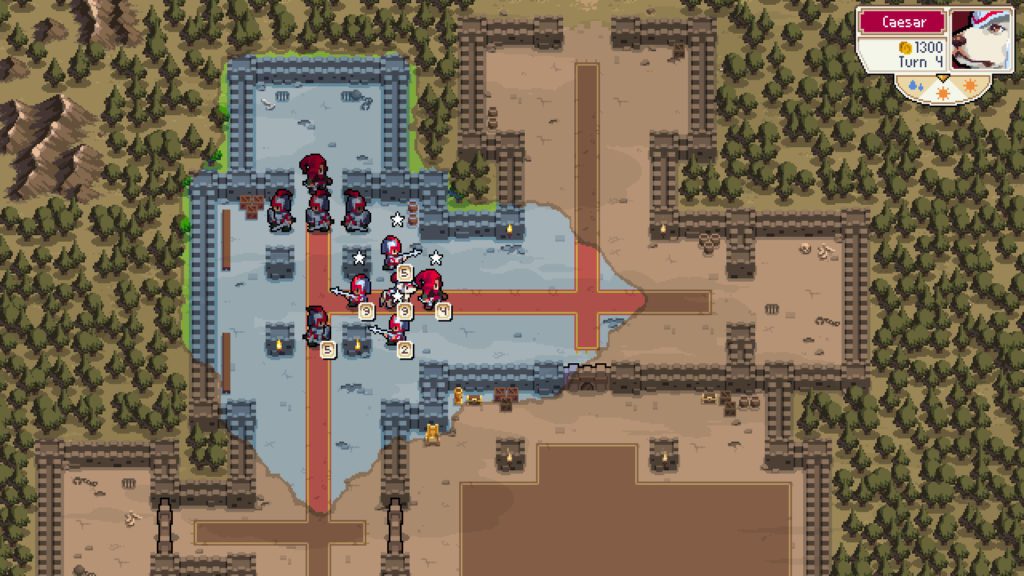 Wargroove features retro inspired sprite graphics which are cute, for lack of a better term, and give the game a very stylistic and unique look. I found myself laughing at some of the characters various fight moves and temper tantrums throughout. While it’s not a game you’d use to show off your home entertainment system, the graphics are great for the style of game and leave an impression. 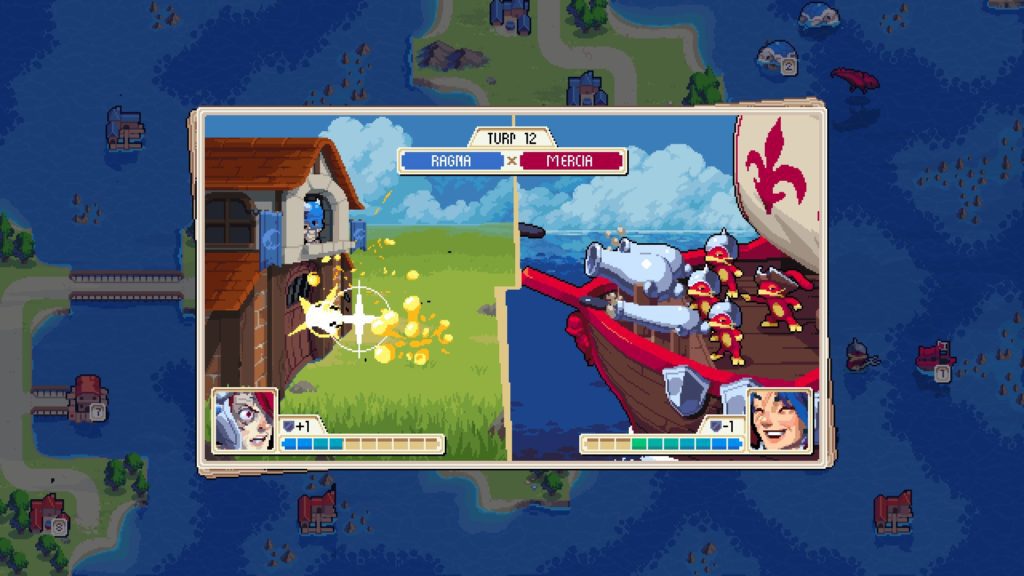 Local and online multiplayer is available as well as a custom mode which allows you to create your own maps or play other player’s maps, which will add many hours of replayability. Gaining 3 stars on all maps and the S rank will also add tons of hours to your playthrough.

While the end goals won’t change, playing through the levels again to improve on your time/moves will keep some players coming back for at least a second round.

For a first playthrough you can expect to invest anywhere from 15 to 20 hours, depending on difficulty level and your skill at turn based strategy games.

I was pleasantly surprised by Wargroove. It’s been many years since I dove into a turn based strategy game and I found myself drawn into the story of Cherrystone, Queen Mercia, and the battle against evil. The constantly expanding cast of characters, both good and evil, as well as the variety of missions kept me hooked until the credits rolled. Do yourself a favor and pick up this game, create a few maps, and fight off Sigrid and the forces of evil for a few weekends.

A review copy of Wargroove was given to Fan Fest News by Chucklefish. You can purchase the game now on PS4, Xbox One, Nintendo Switch, and Steam for an MSRP of $19.99.