WandaVision is over, and it was a lot of fun while we were going through it! I felt like everyone was watching it, you couldn’t look at your phone without seeing something about it. I honestly have been wondering if this is what it was like to watch Game Of Thrones at the peak of its popularity. For weeks we’ve been wondering how this whole crazy thing would end and now we know! Was it worth it? Well, that’s up for each viewer to decide. Me personally? Yeah, I liked it, but I also wasn’t blown away by it. I was blown away by the production values, how well it was written, and the casual MCU references. What I wasn’t impressed by was the actual ending. I feel like this final episode did a lot more setting up than it did delivering a satisfying conclusion. Sure, it wrapped up the Westview stuff, and Wanda dealt with her grief but somehow I still feel like… nothing happened. Here’s our WandaVision season finale review!

I want to reiterate I didn’t dislike the finale. It was really freaking cool! By the end though the only thing that’s changed for Wanda is she has big girl powers now. We were promised to see how this ties into Doctor Strange 2 and yet… I guess it’s more of a passing connection. Obviously, I’m sure she’ll be in the film and her time in Westview will be mentioned but is that really it? I loved WandaVision and wand more shows set in the MCU but I’d like them to be more integrated into the whole thing. 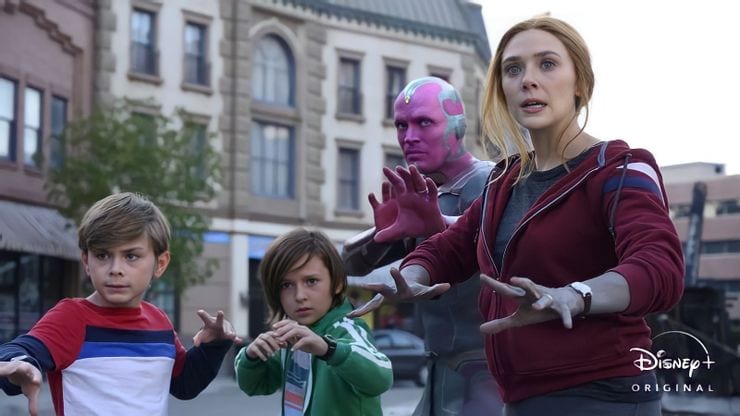 I will say the content itself was cool, the fights were spectacular. Vision vs Vision and Wanda Vs Agatha was insane. White Vision just flew away though, but I gotta say seeing the two debate was hilarious.

If there was one part I wasn’t disappointed by though it was the exploration of Wanda’s grief. This is one aspect the show nailed from start to finish and the whole story line was just so… poignant. Watching Wanda have to give up her entire family was gut wrenching, and I really hope she’s able to fix it in the future. Maybe she can pull versions of her kids from somewhere out in the Multiverse?

I really thought I’d have more to say about the whole episode, but unfortunately, I don’t. Look, if you liked the rest of the series I’m sure you’ll love this episode just as much. It was a great piece of television and an awesome way to expand the MCU. Just, maybe next time we can have some more lasting connections? Here’s hoping Falcon and Winter Soldier is awesome too! Thanks for reading out WandaVision season finale review!