This is one we’ve been waiting a while for. It’s nice to finally have some new MCU content, especially when the show is so intriguing and strange. This is going to be one to keep an eye on, as we untangle WandaVision’s mysteries.

The episode opens up on a black and white classic sitcom opening. It’s honestly kind of incredible. The entire thing is pretty darn funny. 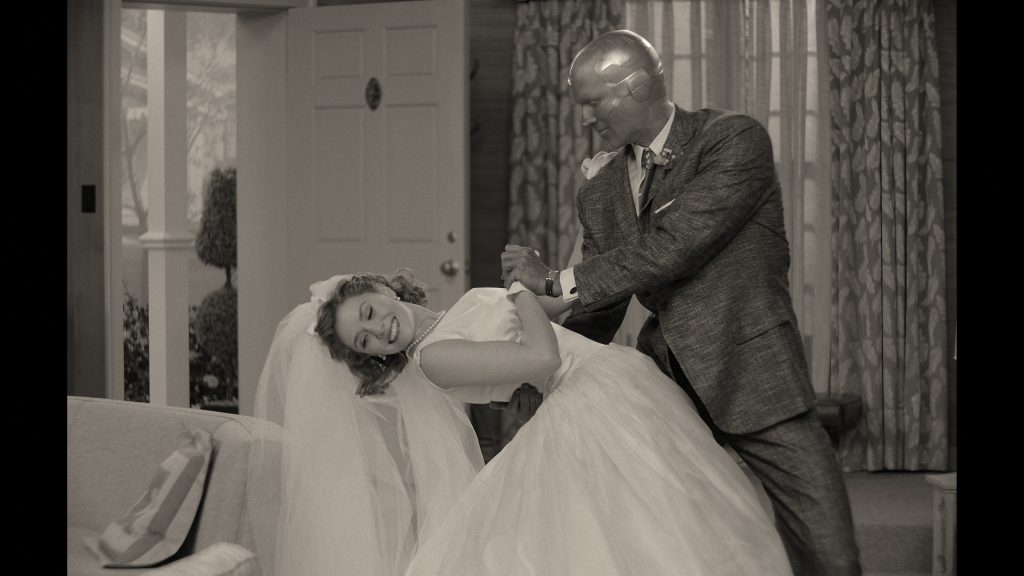 The show begins properly then, with Wanda (Elizabeth Olsen) using her powers to tide up. She smashes a plate into Vision (Paul Bettany) by mistake and offers to whip up breakfast. Vision doesn’t eat, though. Vision inquires on if the date with a heart on the calendar is important. They’ve both forgotten what it’s for and dance around the subject.

Vision alters his appearance and heads off to work, leaving Wanda alone. A knock at the door brings her out of her daydream. Agnes (, a neighbor, is dropping off a plant and introducing herself. Obviously, Wanda and Vision have just recently moved in. They discuss Wanda’s marriage and why the day is important. Wanda says it is their anniversary. Agnes heads back to her place to grab a magazine. She wants to help Wanda plan her night.

At work Vision completes his task ahead of everyone else. Vision asks a coworker what they do at the company, exactly. His coworker doesn’t know, but he says that Vision has increased productivity by 300%. This is where Vision’s boss, Mr. Hart (Fred Melamed), says he’s been looking forward to dinner with Vision and Wanda. That is what the date is. We also learn that people who fail the employee dinner get fired.

Agnes and Wanda continue to plan the anniversary together. They discuss lame seduction tactics. Vision calls Wanda to tell her about the dinner, but there is an apparent miscommunication.

We get an odd, out of place commercial for a toaster created by Stark Industries.

Then Vision arrives home with his boss and boss’s wife. Wanda shocks Vision’s boss by putting her hands over his head. They cover up the miscommunication by claiming they are from Sokovia. He drags Wanda into the kitchen and they discuss the miscommunication. Wanda uses her magic to change her outfit.

Vision and his boss discuss the workplace, while Vision still tries to figure out what his company does. Wanda, meanwhile, has enlisted Agnes’ help. Agnes has brought an entire four-course meal and Wanda rushes her out of the kitchen. She then uses her powers to cook dinner. Mrs. Hart (Debra Jo Rupp) opens the kitchen shutters though, and Vision distracts the Harts’ by singing.

While Vision sings a stunning rendition of Old McDonald’s Farm Wanda struggles with dinner. She summons Vision to the kitchen to help. They switch places and Wanda heads out to entertain the guests. There is a knock at the door, and Agnes drops off a pineapple for them.

Wanda improvises and makes breakfast for dinner. The four share a toast before they begin to eat. After a question about their past Wanda and Vision flail while trying to answer where they’re from and when they were married. They can’t remember their story at all. Mr. Hart grows aggressive then begins to choke. His wife just keeps telling him to “stop it” in a really unsettling sequence. Vision saves him by removing the food through his throat.

The Harts decide to leave rather suddenly. Vision will, apparently, be getting promoted. Vision and Wanda sit down, acknowledging how unusual of a couple they are. They decide on a song and anniversary and Wanda creates rings for them. They share a kiss as the episode closes out. Or so it seems…

Instead, the camera zooms out revealing that someone was watching WandaVision in-universe, leaving us with oh so many questions.

You can check out episode 2 here!