Geeklings, it’s go time. After a second half of the season that has spent a large amount of time spinning its wheels it finally appears that we are on the brink of war between Rick and Company and the Saviors. Finally. All the pieces are finally on the board and it’s looking like this powder keg is finally going to blow. Just in time for season eight (womp womp). Rick has his weapons and an army and Negan… well Negan still has the Saviors and they’re a bunch of jerkfaces. Although I would argue that the Saviors aren’t much different than Rick and Company lately, especially after last weeks “we’re taking your guns Oceanside ladies” escapade, but this fight has been brewing since the best bro hug of twenty seventeen so let’s get it on (fight wise, not the Marvin Gaye song)!

But before we “get it on” there are still a few questions that need answering. For starters, during last week’s episode Negan mentioned that a little birdie told him about Rick’s little crusade which would mean that some one is snitching. But who? We are well aware that snitches get stitches, thank you Ice Cube, which means who ever is feeding Negan is in for a world of hurt, but I have a problem with this. There really has been no indication, at all, that there has been someone who could be turn coating and relaying information back to Negan. Unless, and hear me out because it’s a little bananas, because that person is Morgan. I know, I really don’t believe it either but there is a little wiggle room here. After killing Richard, Morgan went all crazy and wondered off to find his own adventures much like the television show Kung Fu. Is it so hard to believe that some where along the line he got picked up by the Saviors and maybe tipped them off that a war is coming? Richard had to die and Morgan is descending into clearing everything out (see what I did there? It was a Morgan sanity joke). We all know Morgan has constantly been a thorn in Rick’s side, especially when it comes to something confrontational, which makes him, at the very least, a suspect.

I’d also like to throw the Whisperers out there. I know they aren’t officially the Whisperers comic book readers but come on, who we fooling here? Would it be so hard to believe that someone from that group has been sending news of Rick’s activities to the Saviors? Last I saw there was a group leader who was still pretty miffed that Rick made off with her cat statue. Just saying. Although this reveal would be a bit anticlimactic it does seem like the most likely.

And speaking of traitors there’s Dwight who finds himself with a gun pointed at his face in Alexandria. As a fan of the comic this has been a moment I’ve been anticipating for awhile now and I’m curious to see how this plays out. I can’t quite peg Dwight, and I’m not sure if the show runners do either. At one moment he’s sympathetic and the next he’s stealing people’s food to make sandwiches with a dash of dickish personality. I want to believe that Dwight is there because he’s had enough of Negan but the inconstancies of his character make me a little apprehensive in trusting him. Rick certainly isn’t welcoming him with open arms either, and if things go south I can certainly see Dwight being fed to Daryl. 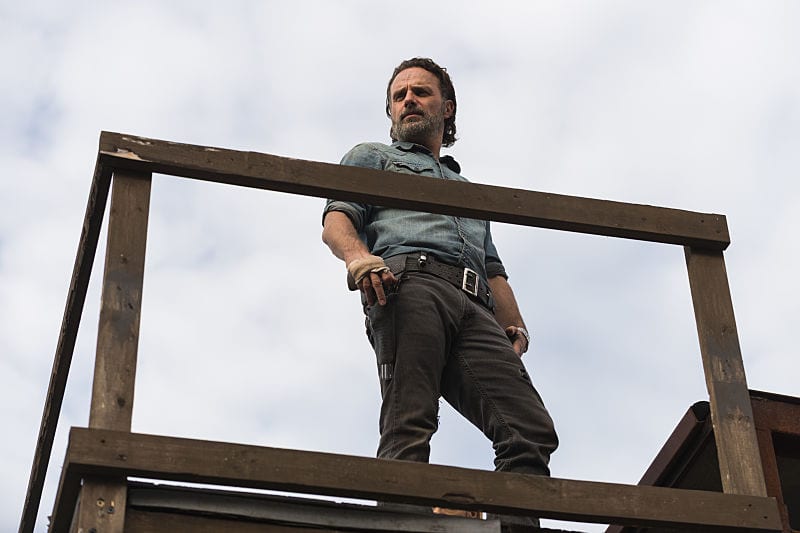 Outside of those burning questions I’m not really sure what to expect with this years season finale. I thought season seven started off super hot with some of the shows best story telling and then, in typical Walking Dead fashion, kind of leveled out and started prepping for next season which hurt the story quality. While this years season doesn’t carry the impending doom of last years, with the arrival of Negan, I’m hoping that my lack of expectations could lead to a pretty kick ass episode. War is coming and with war comes death… it’s The Walking Dead, you know someone’s going to die. It’s actually been awhile since we lost a core character it seems. Which means we are way over due.

There you have it Geeklings. After last weeks episode what do you expect for the season finale? Is Dwight trust worthy? Could Morgan be the mole? Whose going to live and whose going to die? Sound off in the comments below. If you want to talk more Walking Dead or anything else you can find me on Twitter @iamgeek32. Happy viewing everyone and may your favorite character survive the night. See you all tomorrow for the review!