When we last saw Rick he had just arrived at the Hilltop. He had reached that point where enough was enough and it was time to show some of that fire again. That neck biting spirit that we’ve all come to know and love. Show a little bit of that manic who isn’t afraid to throw someone through a window and then pull a gun, that he’s not allowed to have, on an entire community. When the doors of the Hilltop opened something had changed or reset. Rick had his swagger back, Rick had his gun back, and Rick had his bro back. With all that in tow, Rick took his little army of ass kickers and marched right in to Gregory’s office to tell him the time had come. It was time to take a stand. No more would they let the Savior’s beat them down. Rick asked Gregory to help, to lead the Hilltop in glorious battle, aaaaaaaand Gregory told Ricky to go cram it in his cram hole.

Oh. Okay that makes sense. Gregory is the definition of someone who starts a fight in a bar and then hides behind his friends because he doesn’t understand why people want to beat him up. Clearly he is not the leader meant for the Hilltop. That role is meant for Maggie, who is sans a husband and packing a child, and needs a new purpose in this post zombie infested world. As if there was any doubt, about twelve people show up saying they want to join this army. They’re willing to fight. Score! The numbers are growing as Maggie slowly begins to claim the Hilltop as her own. 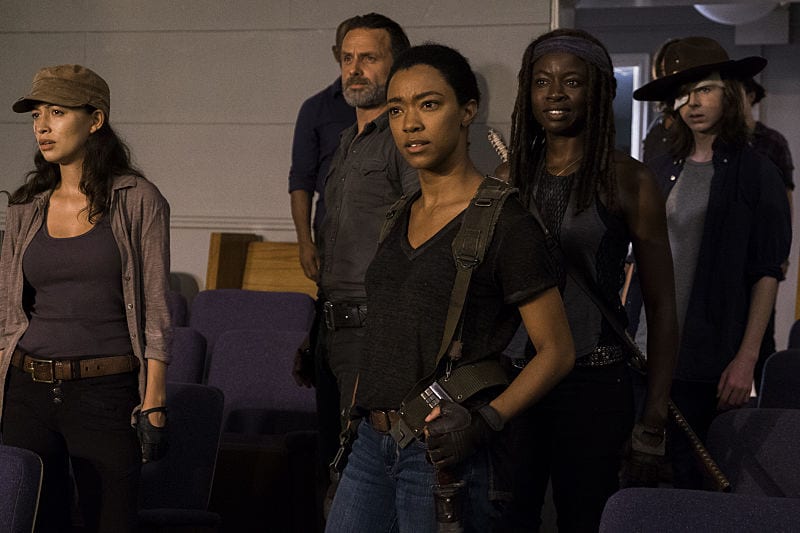 Not felling defeated, and trying to build off that small victory, Rick takes his group of potential Savior killers to the Kingdom. A place he has never heard of but Jesus swears by. A place where people ride horses and act as if life is a 24 hour Renaissance Fair (not that that’s a bad thing. I once went to one of those things and threw tomatoes at a heckler. It was awesome). A place where a king, yes a king, has subjects, and don’t forget to tell your friends, and a freakin’ tiger. Surely this must be the place where an army is born. The Kingdom. The King. A tiger. Yes, yes this is it. The rebellion is neigh Geeklings. Rick tells the king his speech, sells him on some big time ass kickery, raises the excitement of Jerry (quiet Jerry), and ends it all with a story about a girl who digs up a rock because no one else would. This is the moment. Rick is impassioned. He’s in the zone. He fears no tiger. Surely King Ezekiel felt this. In his moment of needing to be persuaded he turns to… Morgan.

Seriously Morgan is the cold you get in the summer. He’s the wet toilet seat in the public bathroom when you really need to go. He’s the guy at the party that says this party is great and all but do we really need an ice luge? So, Morgan does what Morgan does and suggests that maybe there’s another way to go about this. Why fight? Maybe they can thumb wrestle and divide the communities up and end things with a hug and a smile. Way to go Morgan. Needless to say King Ezekiel declines the offer but offers to house Daryl who is now a fugitive (“I didn’t kill my wife”… not that type of fugitive). 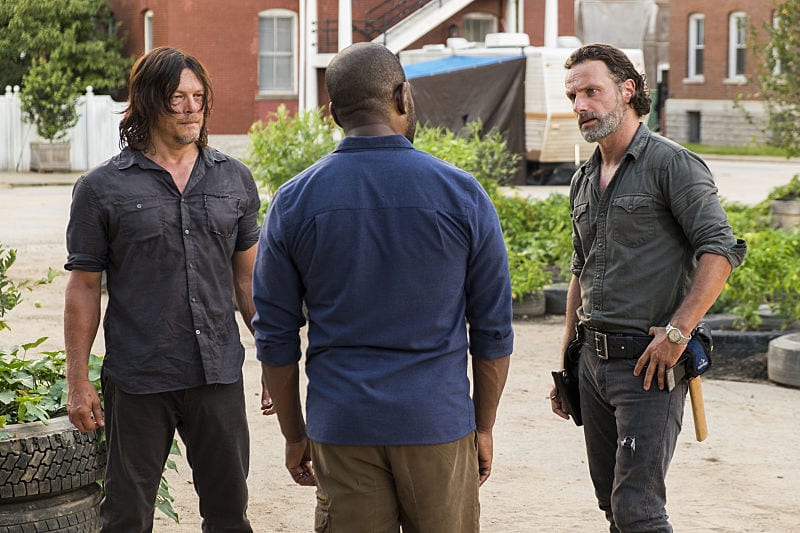 As far as rebellions go, this isn’t off to the best start and I found it a little annoying. Only from a story telling perspective. Obviously the Hilltop will join up once Gregory gets the boot and Maggie takes charge. That’s only a matter of time, but the Kingdom bowing out just seemed like this was going to be a couple of episodes where time was wasted and the Kingdom, inevitably, join forces because the Saviors are big poop heads. I’d prefer they pull the trigger on this development now but I’m willing to be patient enough to see where this goes.

Not everything was a loss for Rick though. There is a discovery of a hoard of zombies (eeeeep) and a cable wire filled with dyn-o-mite. Rosita, who is desperately looking for a purpose and apparently has found one as master of understanding bombs (???), disables the bomb and the rest of the crew starts cooking them off the wire to use at a later date. This had all the LOST feels to it as I couldn’t help but think that some one was going to get a little Artz on them. Luckily no one went explodey though. Rick, figuring he might need this hoard of flesh eaters at another time, set everything back in place (minus the dynamite) and then, with the assistance of Michonne, proceed to preform my favorite zombie kill ever. There was something super satisfying seeing an entire group of zombies mowed down by a cable wire. Total high light of this episode for this humble reviewer.

There were a few other things to point out here- 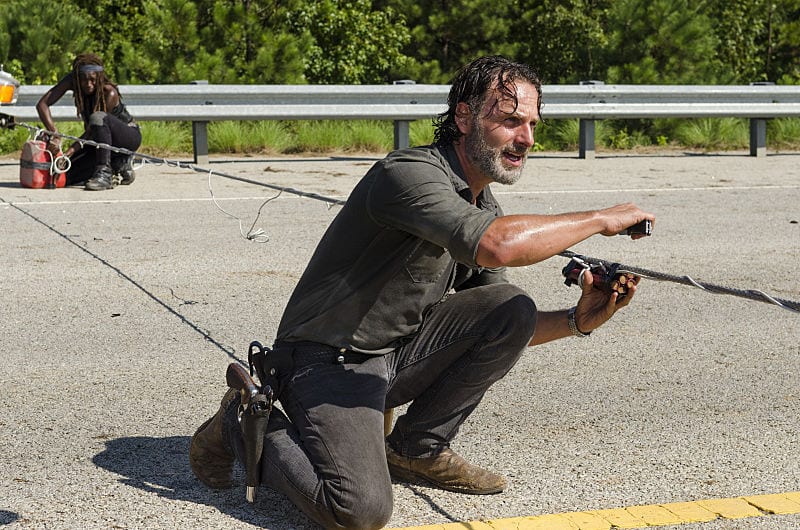 There you have it Geeklings, what did you think of the mid-season premier of The Walking Dead? Did any of you have weird prom flashbacks as Rick got turned down from the other communities or was that just me? How awesome was that cable wire of death scene? Who do you think these mole people are? Do you think smiling physically hurt Rick’s face? Sound off in the comments below and if you want to discuss this or all things geeky you can find me on Twitter @iamgeek32.

One thought on “Walking Dead Review- Walking A Tight Rope”