I think we’re far enough into The Walking Dead to know that this isn’t just a show about zombies. In fact, the zombies often play the window dressing to some of the shows bigger themes and questions. The Walking Dead, through its own unique/messed up ways, is willing to tackle subjects like love, friendship, and family but there is little doubt that the shows major theme is that of survival and if it’s possible to preserve a shred of humanity within an apocalypse. Over the years we’ve watched as this question has buried characters while others have been able to maintain a form of balance, but no matter what the season’s major conflict, The Walking Dead is constantly asking the question what is considered too far? What can’t you live with doing? Last night’s episode, “Monsters”, not only was this seasons best but tackled the ambiguous question of, “who are the monsters on The Walking Dead“.

The obvious answer is the zombies but we’re not looking for obvious here. This label is clearly directed at the people who inhabit this universe. Who among them are actually looking to rebuild the world and who among them have used this apocalypse backdrop to be their worst self. “Monsters” directed this question within each turn of the episode and some of the answers were complex and a number of them were infuriating. When we last saw Rick he was being held at gunpoint by season one throwaway Morales, and while Morales didn’t hang around very long begging the question why even bring him back in the first place, he did raise some interesting ideas. For example, would Rick act any differently if the situations were reversed? To his credit, Rick says he would try but neither Morales, Rick, or the audience really believe that. I mean, we’re not even one episode removed from Rick throwing a father into a shelving hook. Rick talks a big game when he preaches about humanity and the future, but of all the characters on the show, it seems that Rick is quickest to blur that line when it fits his needs. Do I think he would have had a conversation with Morales if he got the drop on him? Maybe… but Rick wasn’t in the compound searching for conversation. He was there for weapons, weapons that had been moved, and while Rick believes he would’ve acted differently and maybe believes that someone’s word still means something, the fact that he takes Polaroid pictures of the carnage kind of contradicts that. That’s a Saviors move and it’s barbaric and borderlines on death porn and super conflicting to the message that Rick is trying to portray. I want to tell you that we’re going to rebuild the future together but check out the pictures of all the people of yours I killed. 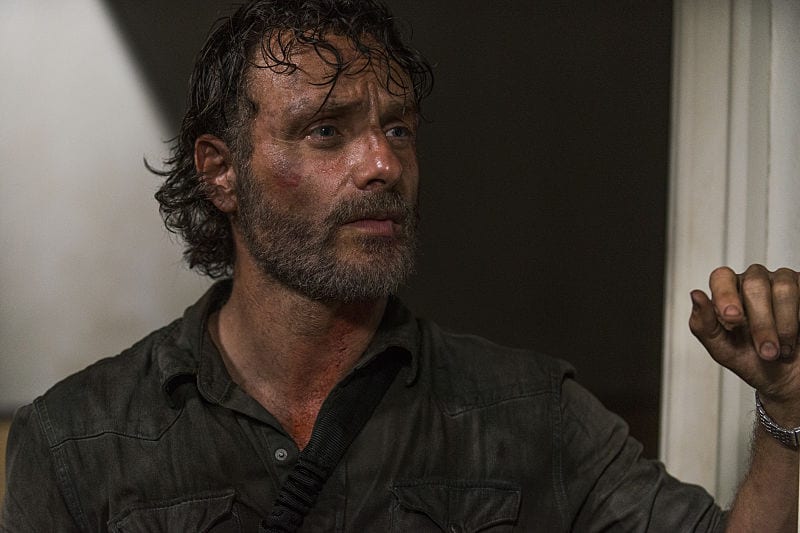 Daryl, on the other hand, has no problem accepting his role in this war. Questions of humanity don’t matter to Mr. Dixon. Creeping up on Morales and killing him, knowing full well who he was, was systematic. When Rick asks Daryl if he knew who he just killed, Daryl responds with a yes and a who cares. And while I couldn’t agree more with the who cares about Morales, Daryl isn’t wrong. This is a case of us or them and Daryl, having lived on the other side, is all about it being them. That’s why he shoots the guy behind the tree. They got the information they needed from him, weapons had been moved, but what purpose is served by allowing him to run back to Negan? Rick may have given his word about protection but Daryl didn’t, and one has to suspect if this wild dog mentality from Daryl is going to lead to conflict later with Rick.

Elsewhere things got a little frustrating with whole Jesus vs Tara and Morgan storyline. Fresh off a victory over one of Negan’s outposts, Jesus forces the rest of the group to take Saviors on as hostages because killing is wrong and makes us savages when in fact Jesus is the one who kind of got the ball rolling on this war. Now that he’s in the heat of battle, and poor decision making almost cost him his life, Jesus is taking the stand that not everyone has to die. Oh really? You’re barging in on an outpost with assault rifles and strategically bursting into rooms firing shots, but not everyone has to die? Jesus’s argument with Tara last week was borderline ridiculous as it was neither the time nor the place for that discussion, and it kind of continued this week. Tara is all kill, kill, kill, even going so far as to point her gun at the hostages while pretending to shoot and Jesus stands firmly with the idea that everyone is going to have to live together once the war is won. This is where I have a problem with Jesus’s argument. The ones with assault rifles firing back at you, they want you dead. Chances are if they lose they’re not going to want to live with you. They’ll probably cause you a great deal of grief and frustration. With that in mind, shouldn’t you weed out the good from the bad and rebuild your civilization that way? Not everyone can live in this war and you can’t force people to conform to your lifestyle just because you won. How does that make you any different from someone like the Governor?

Morgan, on the other hand, I can’t figure this cat out. One second he’s playing the Jesus role pissing off Carol and now he’s in the I’m going to kill everyone role and that’s the way it’s got to be. This doesn’t make the character complex but frustrating. If he bails on his convictions so easily why should we, the audience, put any stock into what he believes? I think Morgan’s turn as the Terminator is rather silly and in a lot of ways a step back for the character, who has either been annoying with his convictions or super interesting when he’s crazy counting chocolate bars, and that didn’t translate well towards his kung-fu battle with Jesus. Like, where the hell did everyone go when that started? Weren’t there a number of people in the woods racing after Morgan? Did they all just stop and say “let’s see what happens here”. Once the fight was done did Morgan act like he blacked out and wondered how he’d gotten there? It definitely seemed that way. Like I said, this whole storyline is pretty silly and all parties involved, both Jesus and Morgan, are beyond frustrating at this point. 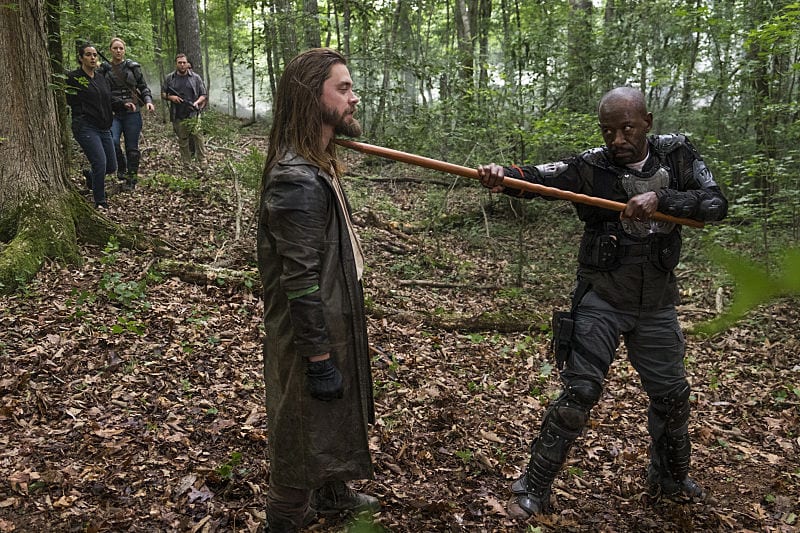 The only problem is Maggie, whose pregnancy is ridiculous even by apocalypse standards, who makes some pretty dumb choices this episode too. It almost seems like she should know better at this point. I get that Maggie thinks like her father and Glenn and chooses to see the best in people but the fact that she’s willing to let Gregory back into the Hilltop is so beyond stupid I can’t even. How many times is this guy going to betray you before you understand that he’s a snake and a cancer? How can Maggie possibly lead while Gregory exists? She should have closed the gate, had a restless night sleep, and moved on with her life, but instead she agrees to give him yet another chance. I understand that we want to preserve our humanity but at some point, we have to start questioning the greater good. Some people are totally worth killing.

Some other quick notes before I leave you-

There you have it Geeklings, three episodes in and The Walking Dead is posing some really curious questions and character behaviors. What did you think of last night’s episode? Who are the monsters here? Are Jesus and Maggie being willfully dense? Should Morgan just leave the group and wander the woods? Sound off in the comments below. If you’d like to talk more Walking Dead with me you can find me on Twitter @iamgeek32. See everyone next week!