Well I think it’s safe to say last night’s episode of The Walking Dead was the complete opposite of the premier. If we were making a comparison I would say that the premier was a lot like getting an invitation to a wedding with the Freys; you know you shouldn’t go because the last wedding they hosted went to hell but there might be an open bar and who doesn’t love an open bar. Last night’s episode played more like the LAIRE group you’ve been dying to join but now with more zombies which makes it cooler. I also suppose last night would be the closest that The Walking Dead could come to giving it’s audience a hug. You could almost hear the show runners in every scene asking if we were all right and trying to assure us that not everything would be that bleak. “Look guys, look, there’s a tiger! People love tigers. Right? See no vampire bats here. Yay tigers!” And I have to say the effort was appreciated and a much needed change of pace from last weeks Pit of Depression and Horror. 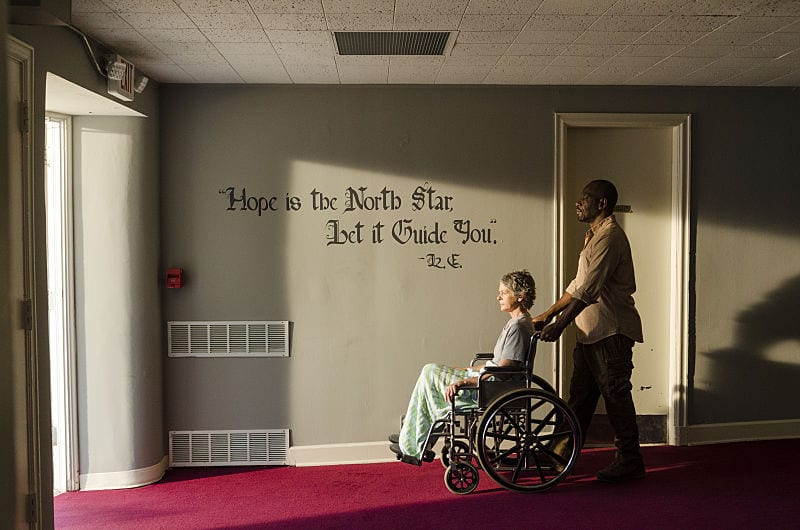 So, what did everyone think of the Kingdom? It is clearly different from anything else we’ve seen in this universe which allowed it to come across as something fresh and unique. Is the premise utterly insane? Yes, of course it is. But did you watch it thinking, “I think if I was going to be alive in the zombie apocalypse this is where I’d want to live. These people ain’t so bad”.  I think some of you did and that’s because it really embraced the idea of escapism an idea that The Walking Dead really hasn’t explored. We’ve seen groups that were inexperienced and ignorant, who don’t believe the world could be as bad as it’s become, and those people are dead now. We’ve seen people who have tried to take everything by force and eat anyone that got in the way, and those people are dead now. We’ve seen people who understand how important community and sanctuary are and are willing to do anything to preserve that, and only some of those people are dead. With the Kingdom we have a group of people who understands that the world is filled with zombies but this world they have created for themselves helps lessen the burden. How bad can it really be when you have a king who has a pet tiger and you get to talk like a medieval knight? Huzzahs for everyone!

I think with the Kingdom comes a certain level of ignorance is bliss. From what I’ve gathered from this episode there are a select few people who understand the way this new world works (and I would argue that most of them work closely with Ezekiel) while the rest have allowed themselves to get caught up in this pretend world that has been created. This I think can be a dangerous thing. There is little doubt that the people of the Kingdom look up to Ezekiel but is it possible that he’s doing them a disservice with the way he’s allowed their community to be constructed? I worry that the people of the Kingdom are too sheltered and if called upon for war would be of no real service to anyone. Think about it. Clearly Ezekiel has encountered the Saviors but meets with them off the Kingdom for the sake of his people. I would wonder if any of them actually know what’s going on? Wouldn’t you want to know that there are pigs waiting to be slaughtered? I sure as hell would. Fruit is great but I’ll take a pig any day of the week. At what point does this catch up with the Kingdom? From what we know from Negan and the Saviors they’re not really the subtle type, and if they want something they’re going to take it. How long can a secret accord like this stay secret, and once made public how would the people of the Kingdom respond? Of course that’s just me doing some guess work, but as fascinating as the Kingdom is it does make you raise an eyebrow. How could we not? We’ve been hanging out with Rick too long. People need to be aware of their surroundings even if it means taking the blinders off. Keeping them ignorant might not be the best way to lead. 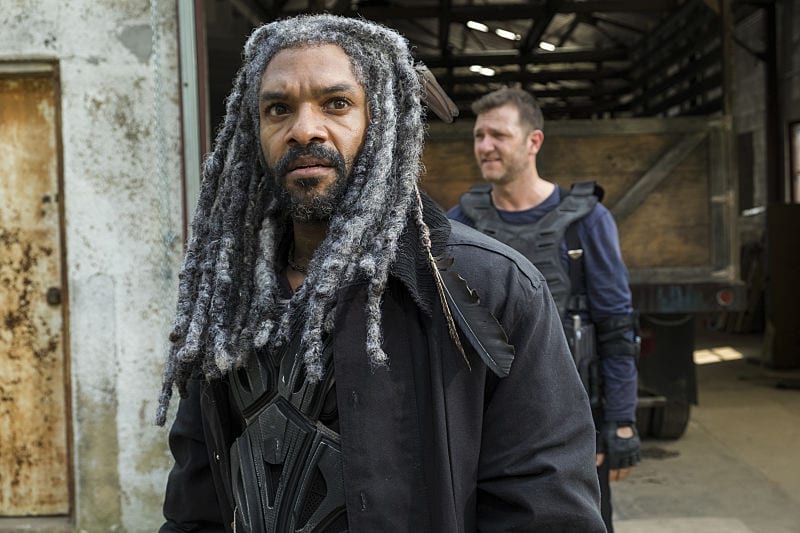 With that being said though I liked Ezekiel. As a matter of fact I liked him a lot, and that’s not just because I’m a cat person and he has a pet tiger #ultimatecatgoals. I believe he’s coming from a good place here and was instantly charismatic whether he was in or out of character. Here is a man who built his leadership on myth and legend and hasn’t frowned upon those legends because he believes the people need something like that to believe in. It’s comforting knowing that Ezekiel knows it’s all bullshit but it’s also a bit alarming. Allowing these people to worship him like that when he hasn’t necessarily done anything, besides own a pet tiger, could be leading these people to their doom. Is Ezekiel battle tested? Unsure at this point but I’d be willing to be that he isn’t. I think he’s good at playing at war and battle with zombies but he does have an agreement with the Saviors which means he folded when put into that confrontation. Is it because he was threatened and was scared or was it because he didn’t think he had the forces to go to war with? Something we’ll have to keep our eyes on. But despite all that I liked him. For someone who is constantly playing pretend he seemed genuine.

While this episode was filled with a lot of new characters and locations there were also some familiar faces as we learned about the Kingdom through Morgan and Carol. I was sort of surprised to see that Morgan had adapted so well to this place but as the episode went on it made sense. Morgan has blinded himself from the reality of this universe ever since the events of “Clear” and now he’s surrounded by people who just want to exist and farm and play knights of the round table. While he might have to use his imagination some (which doesn’t strike me as a strong point of Morgan’s) I thought Morgan was kind of enjoying his time in the Kingdom. While Morgan has a better understanding of what it is like out there, I still think he views Rick (especially Rick) and his Merry Band of Zombie Ass Kickers as savages. There will always be a part of Morgan that believes that any situation can be talked down and reasoned with, and that’s why he feels so at home at the Kingdom. Like minded people even if some of them are pretty ignorant.

But Carol though… Carol isn’t having any of this bullshit.

I knew instantly that Carol was going into character mode when she was first introduced to Ezekiel, and while it was fairly obvious (even the King picked up on that) it’s what we’ve come to expect from Carol. I said in my preview column that she has become the most adaptable survivor because she’s a chameleon. Home maker? Check. Mother like figure? Check (just don’t look at the flowers!). Burner of the sick? Check. Carol has so many different attributes that make her better equipped to live in this world then anyone else. She has the ability to turn it on and off like a light switch and is able to see more and learn more then any other character.  I actually believe that Carol would make a great agent for the Many Faced God. Move over Arya Stark!

But all of that has come with a price and we are now seeing a Carol who is more than a bit lost and slightly broken. That opening scene served a really good purpose in letting us know that Carol has reached a point where she can no longer tell the difference between the living and a walker because those deaths all mean the same to her now. It certainly seemed that she was suffering some form of PTSD and a new type of Carol will be born out of this. One that isn’t as cold and empty but also knows and appreciates the harsh reality of the world they live in. I think that was part of her problem with Ezekiel as she believes he sees the world in rose colored glasses while she knows what’s really going down. And while she may shake her head at the way he chooses to rule and his lack of actual experience there was something about him that spoke to her in ways that Morgan and Rick could not. I know a number of you have been shipping hard for a Carol/Daryl romance but I’d keep your eyes on the King here. A man doesn’t just show up at your house with some fruit and his tiger because he’s not interested. 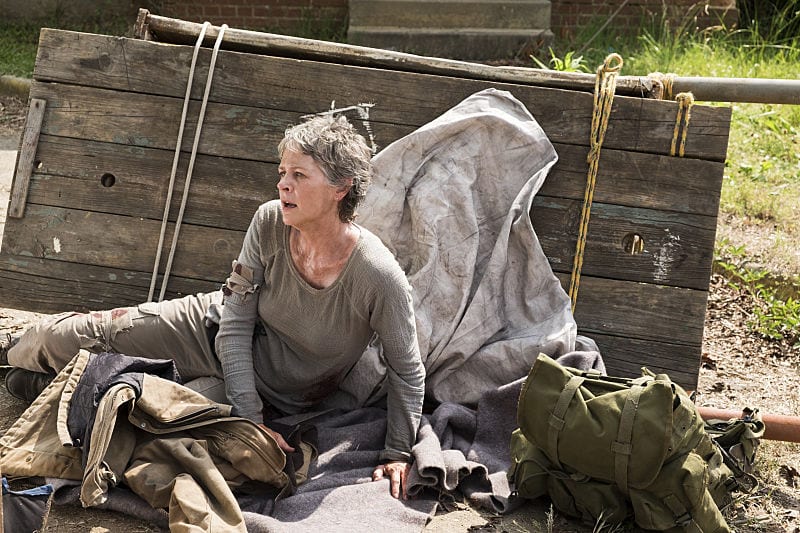 There you have it Geeklings, a much different episode in every possible way this week. What did you think of the Kingdom? Is King Ezekiel a good leader or just another fool? Can Carol be saved? Would you have a tiger as a pet or are you more of a bear person? Feel free to let it fly in the comments. If you guys want to discuss The Walking Dead with me further, or anything else geeky for that matter, you can find me on Twitter and Instagram @iamgeek32 . I also have a blog where you can follow my continued word adventures (pssssst it’s here, I Am Geek). Until then Geeklings!