The other title I was playing with for this review was “Leave the Cobbler” because #jerryreasons, but I feel like “All Clear” was more appropriate.

Hello Geeklings, and sorry for the review delay. I kind of got held up with my real life jobs yesterday and they prevented me from hanging out with you fine folks, but I’m here now and we’ve got plenty to discuss. I know I’ve been a little critical of The Walking Dead with my last few reviews, and I feel justified in my reasoning, and was fully ready to come here today to spout more of the same but something happened in the last two minutes of the episode. Something sort of unexpected. The plot advanced. Or more like the plot was put into gear but first we have to plant a garden (#priorities), but it looks like we are on the cusp of furthering this story. The Kingdom, or more importantly, King Ezekiel has acknowledged the fact that they can no longer stand by and let the Saviors reign supreme. There is a war in the air and the Kingdom has to pick a side. Which is great news for Alexandria and Rick and bad news for us as this decision comes just in time for season eight (womp womp).

Sunday’s episode was a bit of a misdirect as it seemed like we were going to be getting ourselves a Carol focused episode focusing on the fact that she can’t escape her past. There is a strong sense of guilt in Carol as we learn that all this isolated living can’t help her escape her actions. You can live by yourself all you want but when push comes to shove you still set a couple of sick people on fire. No wonder she’s having nightmares and smoking in the house. Carol, come on. I know it’s the apocalypse but don’t smoke inside, that’s gross… well, maybe not. If you think about it, I’m pretty sure the apocalypse smells awful, with all those undead people walking around decomposing, maybe smoking inside isn’t the worst smell one could have. Just a thought.

The funny thing though is as much as Carol is riddled in guilt I think she’s restless because she knows the one thing that she’s thrived at is being ignored. Whether you agree with her actions or not there is no denying that Carol knows how to survive in the apocalypse. That was put on display rather early as she dispatched those walkers in front of the gates of the Kingddom both efficiently and quickly. Carol is a badass and I think part of her guilt and restlessness is because she’s not doing more to help. She’s not out there with Rick and Daryl leading the charge. Think of it as an athlete retiring in their prime, that itch to get back will always be there because after some time it’s all they know. Carol knows how to operate this new world and she’s needed, but even with all that this episode belonged to Morgan. 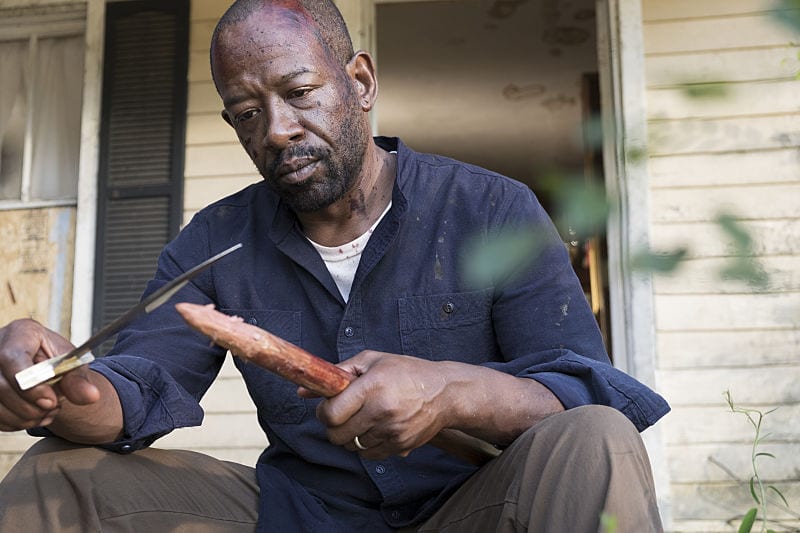 I have not been quiet about my feelings for Morgan in these reviews. I appreciate his stance, I really do, but think it’s illogical and almost pretentious at this point. That type of attitude can not currently exist in the world that they live in. It’s too hostile. It’s too kill or be killed. Yes, it’s great to believe that a bunch of people can sit down around a camp fire and sign “Kumbaya”, air out their grievances, and go their separate ways. I think we all want to believe that we can live in a world like that, but in this world while you’re singing around the camp fire someone else is stealing your stuff and killing your friends because they weren’t looking. I get annoyed with Morgan for how stubbornly he refuses to believe, and I get annoyed with myself because I want to believe what Morgan strives for is possible. This happens to make Morgan a pretty annoying character to me.

Here’s the thing, we obviously knew that Richard had orchestrated the case of the missing cantaloupe because we knew he dug his own grave. Once the guns were drawn, we also knew it was going to be Benjamin that bit it. Come on, he had gotten waaaaay to much screen time, gave a present, and talked about a girl and Richard was too obvious of a choice. What we didn’t know was how badly it was going to shatter Morgan, and instantly I found myself being more drawn to the character. I loved how the show flashbacked to the Morgan before Alexandria. You know, the one who was batshit crazy, spouting gibberish, looking to make things clear, and counting his chocolate bars. That was the Morgan I was more interested in because he was real. That was authentic. The apocalypse had ruined him. His wife and his son both dead. There was nothing left for him but to live or go crazy, and man did he not disappoint in the crazy department. Whoa. The Morgan we see now, wielding a stick while trying to be peaceful seems like a man who is willingly and constantly lying to himself. That became especially clear this week during his freak out. Every time Morgan talks about being peaceful and finding a better way he pushes his crazy/shattered/disillusioned self further and further down, and now we’re at a point where the foundation is cracking and this personality is starting to come through. Think of the serenity now/insanity later concept from Seinfeld but in a world filled with zombies.

Morgan killing Richard wasn’t all too surprising. We knew that at some point Morgan was going to have to kill someone. What made his actions most disturbing and surprising were the nature in which he did it. My man choked Richard to death. For a man who doesn’t want to kill he sure picked a super intimate and disturbing way to get back into things. You know it’s bad when both the Saviors and the Kingdom stand by and watch. I hope someone covered Jerry’s eyes. Now was Richard that disliked where no one felt compelled to stop Morgan or was it more the very fact that Morgan was in kill mode enough to keep both sides at bay? Either way Richard’s death immediately starts to pick at the crazy cracks as Morgan refers to Benjamin by his son’s name. Uh oh, I think someone is about to go crazy town banana pants. 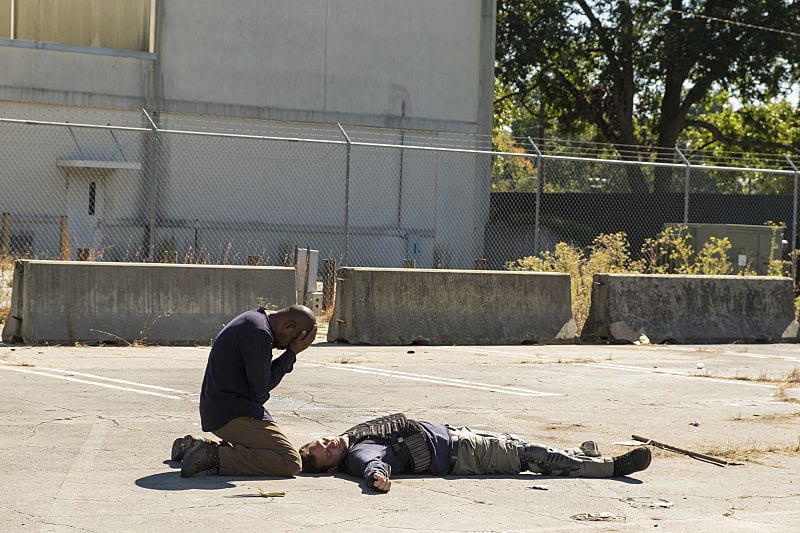 This all leads to a final encounter between Morgan and Carol where Morgan tells her just what happened in Alexandria. It appears that the crazy has also destroyed Morgan’s ability to use bed side manner, as he kind of coldly explains to Carol that Negan has killed Glenn and Abraham along with the other two in Alexandria. This results in the best juxtaposition of the season as both Carol and Morgan stop ignoring their past. Carol marches to the Kingdom to tell Ezekiel it’s time to fight and Morgan starts to sharpen his stick as feelings of paranoia start to creep there way back after being away for so long.

There you have it Geeklings. It seems that one of the more important domino pieces has fallen as the Kingdom might be joining the war against the Saviors. It’s about damn time, right? What did you guys think of this episode? Will Morgan start reverting back to his old ways? Will Carol become more active in the war with the Saviors? What kind of sheningans can Jerry get into next? Sound off in the comments below. As always if you wish to talk more Walking Dead or anything else geeky, you can find me on Twitter @iamgeek32. See everyone later in the week!

One thought on “Walking Dead Review- All Clear”