A week doesn’t really seem like enough time to grieve, does it? Last weeks episode of The Walking Dead left us emotionally empty and completely changed the landscape of the show, something that I think was needed for continued evolution. It’s been a long time since The Walking Dead was just a bunch of survivors trying to survive hordes of undead, and that’s fine. The walkers show up to remind us why the world is the way it is, but in order to keep the terror going there has to be new threats. That’s where Negan and the Saviors come in. They have presented us with something we haven’t seen before, a force that can rival Rick and Company. That in itself becomes pretty scary. But the real question is, where do we go from here?

Negan has reset the board and taken control. Rick is broken, beaten, and lost and the rest of the survivors are trying to figure out where they belong in this new Negan lead world. For starters Maggie and Sasha are not having any more of the Ricktatorship as they both made decisions on their own to go to the Hilltop despite being opposed by Rick, and the rest of the group appears to be shell shocked and numb in the wake of Lucille. This will be an interesting dynamic to follow as the season progresses. Has Rick lost everyone or is there still enough hold to pull everyone together for an eventual war? That’s something we’re going to have to wait to see. This resetting of the board really gives the opportunity for other characters to shine and show their worth and that makes it very interesting. I know from the comic the characters that change the most, and it’s tough to keep those thoughts from these columns, but I think many of you will be pleasantly surprised.

So, where does that leave us for this week? Well, if I was putting money on it, I would guess that we will see none of Rick and Company and focus mainly on the adventures of Morgan and Carol. I don’t fully mind this, if it ends up being true, as we need something a little different to wash the taste of the premier out of our mouths while still allowing us to grieve the loss of two key characters. Plus it’s time to expand the map of this universe a little bit and learn about the Kingdom and it’s King. King? That’s right, we’ve got Kings now. 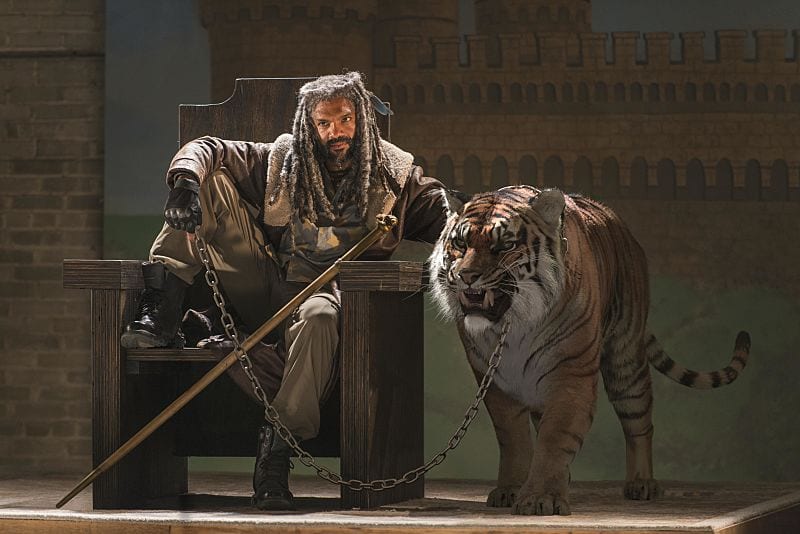 What exactly is the Kingdom? I’m glad you asked. I will say it is unlike anything you’ve seen within this universe thus far. It’s interesting to see these different communities and how different groups of people reacted to the zombie outbreak. Not everyone leads the same way. There are those that lead out of fear and others that lead out of loyalty and love while others start a community and call it The Kingdom. What works for some may not work for others and I would imagine that both Morgan and Carol will have a difficult time processing this new world. Especially when you consider how straightforward and slightly righteous Morgan is. The real wild card is Carol who ended last season broken and lost as well.

I would argue that over the past couple of seasons that Carol has been the character who has adapted the best to this world, and while her methods may be harsh and soul destroying, a number of times they seem completely necessary. Carol has never turned her back on a tough decision, something we’ve seen Rick do a number of times (*cough* Shane *cough*). Whether it’s getting Lizzie to look at the flowers or burning the sick before they can spread disease, Carol was doing the things that Rick thought of but couldn’t pull the trigger on. The tough thing about being the one who makes those choices is the weight it carries on your soul, and last season saw Carol start to collapse underneath that weight, to the point where she just wanted to die. How does one come back from that? Well, from a character standpoint, you pair her up with Morgan who kind of went through the same thing. Morgan knows plenty about breaking and rebuilding and might just be the person to help save Carol. It would be an interesting dynamic to see Carol and Morgan become same minded, philosophically, as they were so opposed to each others way of adapting last season. Something to keep your eyeholes on.

Then there’s King Ezekiel and his tiger. Yep not only does this guy call himself King but he’s got an effin tiger which almost seems more ridiculous then the idea of the undead walking around the earth eating the living. Admit it, the first time you saw the trailer with the tiger in it a part of you was like, “alright, we’re stretching this a bit far now”, and I think I kind of responded the same way when I read it in the comic. It just seemed really out of place and impossible because zombies are sooooo possible (shut up, yes they are!). Knowing the explanation of the tiger I can say it will eventually make sense so don’t go poo pooing it just yet. As for Ezekiel, what can we expect? Clearly he’s a different type of leader then Rick or anyone else we’ve met for that matter. How does he govern his people? Can he be trusted? What does he need a freakin’ tiger for?! These are all good questions to be raising.

There you have it Geeklings. I fully expect The Walking Dead to turn down the bleak with this episode as we start to expand to other communities to see if any of them are as awful as the Saviors. What do you think will happen with Carol and Morgan? Thoughts on Ezekiel? Do you think that a tiger is a practical pet for a world filled with zombies? Feel free to sound off in the comments below and we can discuss once my review is up.

If you want to talk The Walking Dead or anything else geeky you can find Kevin on Twitter and Instagram @iamgeek32 If you’re looking for more of his word adventures you can turn to his blog, I Am Geek.

Trailer and images from AMC