If you’re still getting used to life off the Walker Stalker Cruise, we’re right there with you. Even fans who weren’t able to attend are having post cruise sadness after seeing the incredible photos and videos and hearing stories that everyone aboard got to experience. The cruise this year definitely took on a family theme as fans from the first cruise took in newbies under their wing and the celebrities aboard got a taste of what it meant to be fully emersed in The Walking Dead Family.

After seeing everything for ourselves, we asked some fans what their favorite part of sailing amongst the undead was. Did they love the celebrities in a more relaxed environment? Big fans of the belly flop competition? How about the amazing party which had cruise-goers preparing costumes for months?

It was a mix of all of the above, and the camaraderie, that has fans anxiously awaiting the announcement of a 2018 cruise.

This was my first cruise and my nursing school graduation gift. I had so much fun and can’t wait for next year. The celebrities were the sweetest people…although I have to admit I was super surprised that at 5’2 I was close in height to Tom Payne (still a super sweet guy lol). It wasn’t just the celebrities that made the cruise amazing. Sixthman was really awesome. I felt as if I had known fellow passengers for years not hours. It was truly like a family. I was really happy that after 9 hours of photo ops..the celebrities were allowed to enjoy themselves (we are on a cruise and considering I was tired standing in line..I sympathized with their feet). I think I have two moments that stood out the most. On the last day, Norman and Jeffrey used my selfie to announce to family and friends I passed my boards to become a nurse. Also, at the last panel, I told Michael Cudlitz that I bought him a cigar on the island and would love to enjoy a cigar with him to celebrate becoming a nurse. He responded by saying, “Now no one should listen but I may or may not be in the cigar bar following the panel.” Also..dirty bingo was amazing and I would love to see them do it more than once next time. Katelyn has an amazing voice. I had no idea but plan on buying her music. 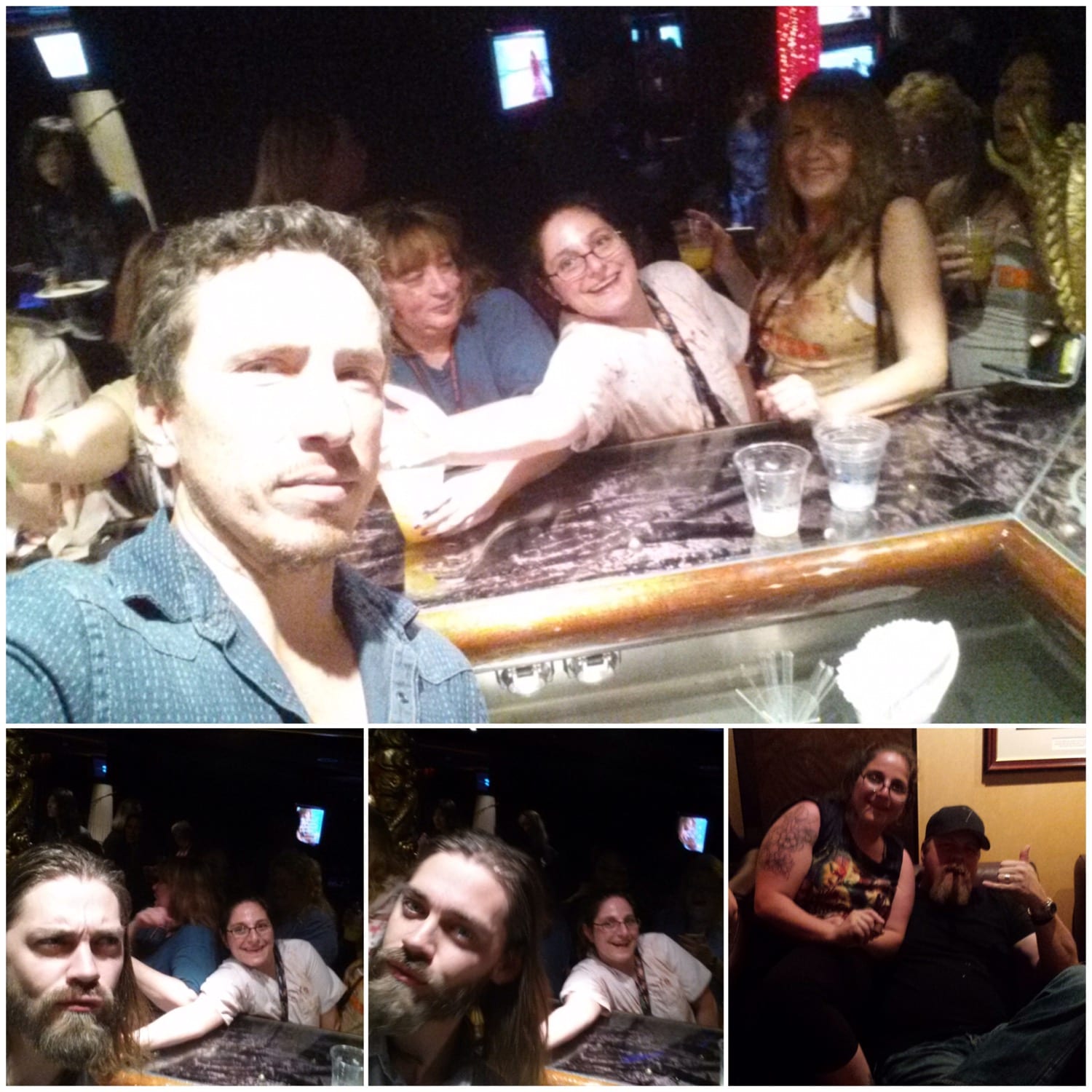 This cruise was so much fun. I got to meet some new friends and could just relax most of the time. The only minor things I would’ve hoped for were maybe screens to project the panels on the pool deck and a couple of speakers in different spots. I also think it would be cool to have our guest tags somehow distinguish how many years we’ve been on this cruise. Overall, I really loved everything! The cast, crew, and Walker Stalker family were all incredible. I had met some of the cast before, but you never know how interactive or nice they are until you meet them and they did not disappoint. After getting to know JDM as Negan, some people might not expect him to be as sweet as he is. He went along with the mini selfie session we had and was just so much fun to be around. Norman was very talkative and even took a photo of my Johnny Cupcakes x TWD x Daryl shirt. Michael C, Greg, and Chandler were so nice and friendly, Katelyn was beyond talented and all smiles, Ross and Michael T were so hilarious and interactive, Tom was a sweetheart and talked to me about the island and England, and Alanna was the most chill, sweet, and fun person to be with. We talked about her daughter and she took photos while eating. Haha. All of them were just easy to get along with and talk to and it was nice that they got to relax and have fun on the island too. Which by the way is probably my favorite. I love that it’s NCL’s so I didn’t have to worry about how to get around or what to buy or drink or where to sit. I love traveling different places no matter what, though, so if Walker Stalker Cruise 2018 is already in the works, hope WSC, Sixthman, and NCL have already signed me up for year 3! 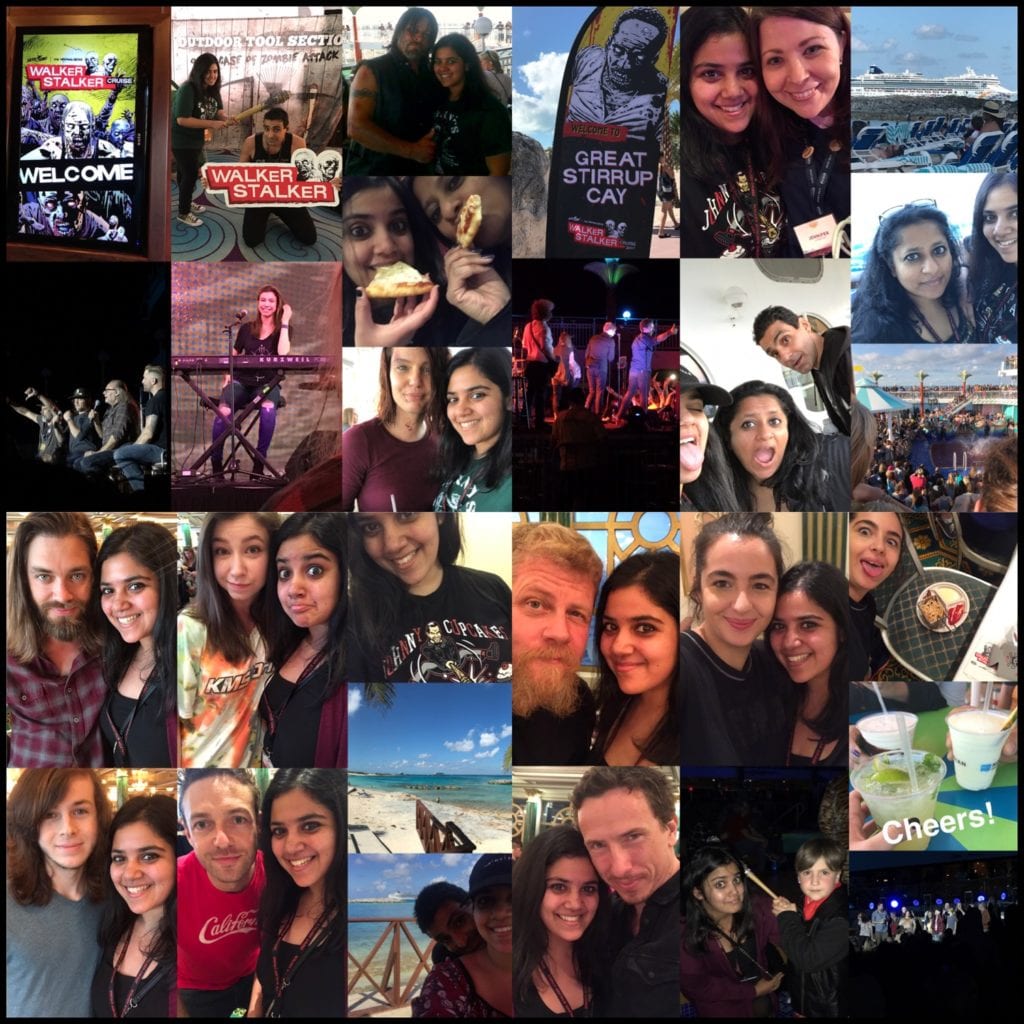 This is the second year we’ve gone and it was definitely more organized with time slots this year making for lesser wait times in line…except Norman. Without a doubt, the highlight this trip was winning a lottery drawing for my wife and I and forty others to a whiskey tasting with Michael Cudlitz, my favorite TWD actor. You see, I dyed my hair ginger after 3 months if beard growing. Amazing how many cruising asked for MY picture with.
The other thing that makes this trip so awesome is the Sixthman service team…over the top. 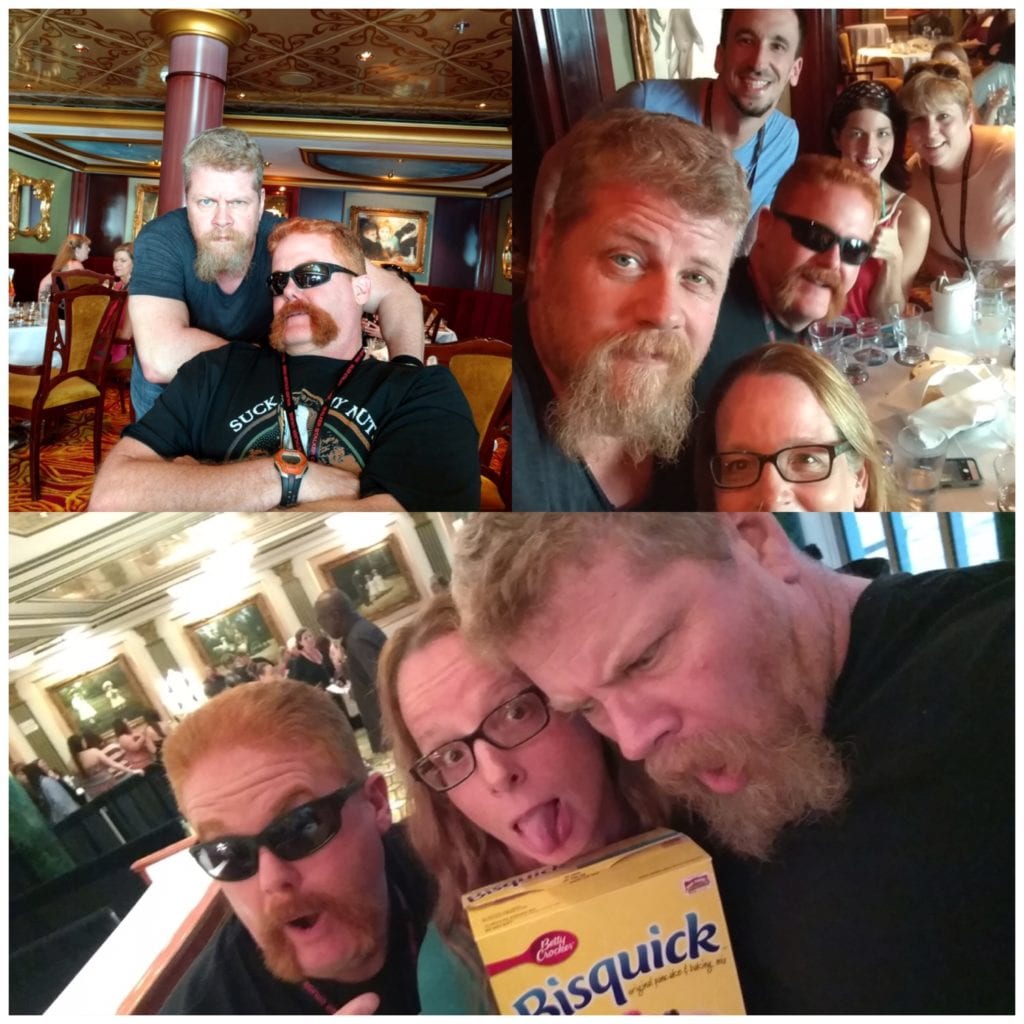 Hi there! So every experience with Michael was awesome but my fav was this convo. After the whiskey tasting his handler was saying how many attendants thought Michael would be the expert. Mr.Cudlitz replied, “I’m just the comic relief and sarcastic comment guy!” I couldn’t help myself…. I chimed in, “Let’s be honest your the eye candy” he responded with something like “hells yeah!” And gave me a high five. 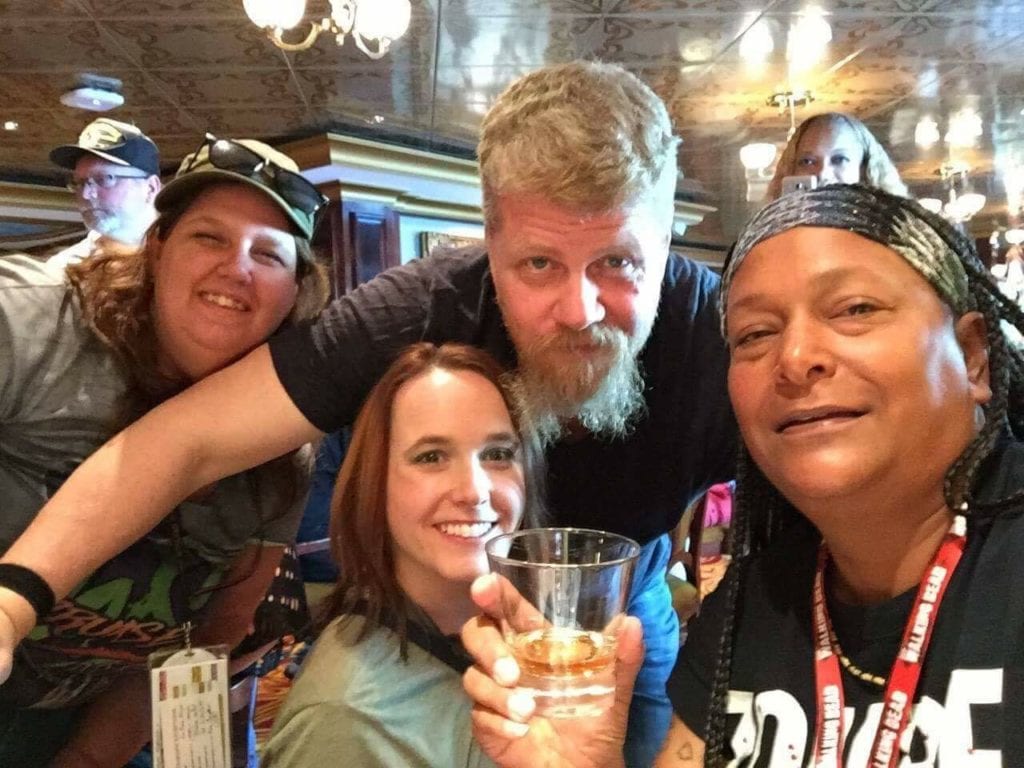 Even Kiki The First Lady, a radio personality from St. Louis sent us some photos of her incredible trip. 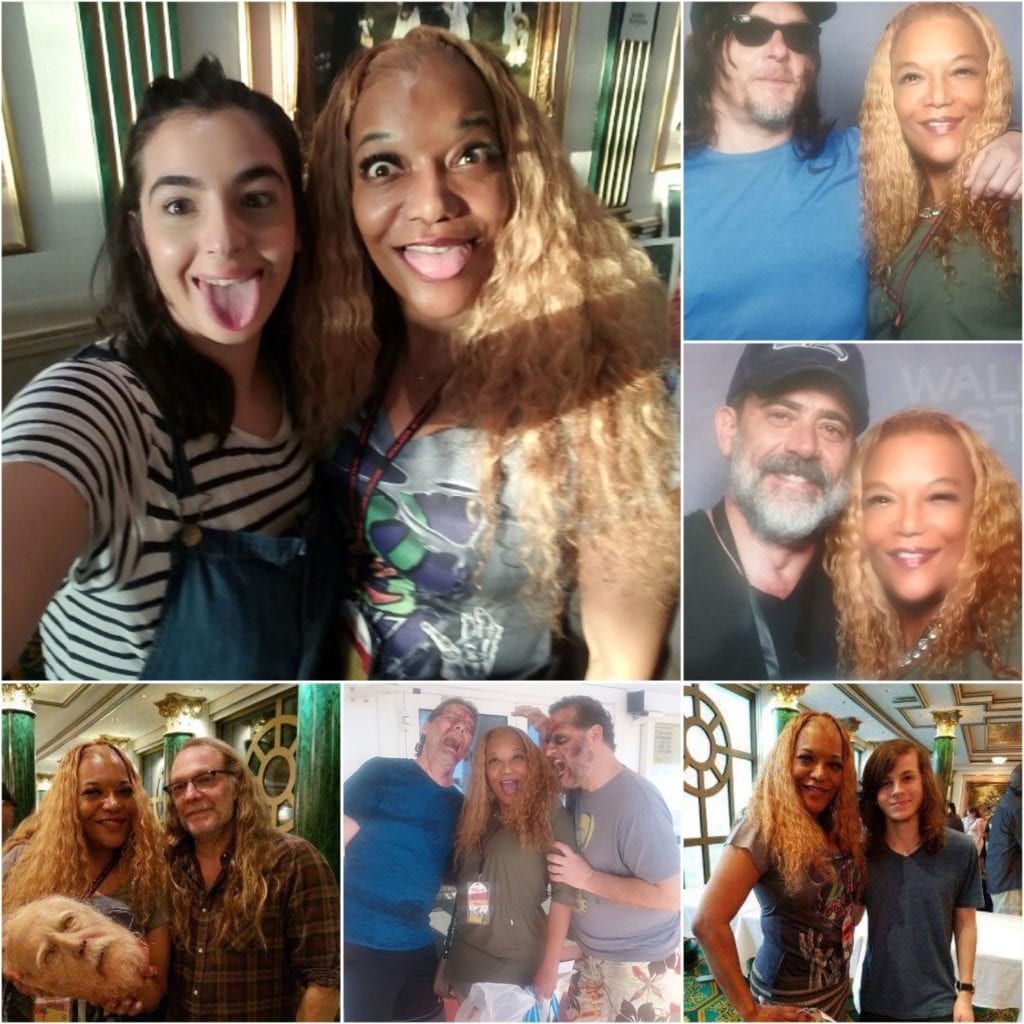 Were you on the Walker Stalker 2017 Cruise? If so, what is the best memory you left the ship with? We hope to see you all again, real soon!