If you’re a fan of The Walking Dead, chances are, you’re still seeing an influx of photos from our Walker Stalker Convention in London. Fans and stars of your favorite series – and more – traveled to the beautiful city for a weekend of excitement, panels, and a lot of photo-ops. While Atlanta is definitely Walker Stalker’s ‘biggest convention’ – London has to be one of the most memorable.

That’s not to say you won’t be in for a treat if you didn’t get to travel to London. Trust us, every show we put on sets a new standard for us to work harder to live up to. For some of you, this year brings a slew of cities and dates that you’ve attended before and are gearing up to go to again. For others, you’re preparing for your first convention. After we saw some fan feedback from London, and looked back at conventions from our own perspectives, we came up with a few additional tips on how to make your Walker Stalker or Heroes vs Villains convention this year the best one yet.

When we walk through the crowds, our favorite thing to see is smiling fans. We want you to have the best experience possible but sometimes the emotions are so overwhelming, you forget to simply smile. Not only is it proven that smiling has an instant calming effect and sends feel good signals through your body, you enjoy your surroundings a lot more if you start off with a smile. Plus, there are people taking photos all the time – you’ll be surprised to see how many photos you end up in the background of. 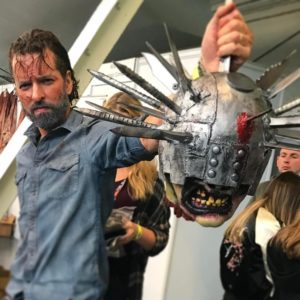 It’s fun to meet your favorite celebrities when you’re all dolled up, trust us, we know! We also know that TWD is more than just a show, it’s a subculture. When you go to the conventions, be prepared to see a lot of people in costume, and consider joining in if you can. It’s awesome to see the things our festival-goers come up with for their photo ops when they have costume ideas, it’s exciting to wonder what version of your favorite character will walk past you on the convention floor, and there’s nothing like looking over at your neighbor during a panel and seeing a zombie. If you go to a convention for 2-3 days, spend at least one of them in costume, you won’t regret it.

So many festival goers run around the convention like they might miss something if they’re not going 100 miles an hour. We assure you, you’ll only miss more that way. Take time to just enjoy. Personally, when I went to my first convention, I didn’t spend enough time looking at vendors or taking in the experience at all. I was there to write and to ask questions and I forgot to really take it in. The second day, however, I slowed down and every convention since then has been taken at the same speed. During one convention, I looked over at Tom Payne’s table and he was dancing to Genuine’s ‘Pony’. At another, I saw Norman silly string the second group of people that morning (after being part of the first). There are a lot of little moments that will stand out in your mind much longer than running from one line to another and forgetting to really take it all in.

Don’t forget to go to the panels, that sounds silly, but it’s worth mentioning. It’s easy to buy your photo ops and figure out your schedule for the autograph lines and totally forget to attend the panel with your favorite celebs just talking. They joke around, they answer serious questions, and you learn a lot about what goes on behind the scenes during the panels. Sometimes, you’ll even witness a dance off. When you go to the panels, don’t be afraid to ask questions. Most of them have allotted time at the end for the audience to ask their celebrity of choice anything they want (within reason). So as long as you’re not begging for a spoiler, ask away!

This should go without saying, but again, we wanted to bring it up. When you’re smiling and taking it all in, don’t forget to just laugh and have a good time. You’ll meet some of the best people you’ll ever know at these conventions. Strangers will be turned into friends and friends to family. When you meet your favorite celebrity, tell them why they’re so important to you. Often, they’re bombarded with the want for a photo or autograph and people forget to just talk to them. So when you go to meet Ross or Chad or Scott, let them know why their characters impacted you or why their stories matter. We’ve seen celebrities offer inspiration to fans and in addition to that, it’s a really sincere and important memory to take with you. Part of the fun in all of this is the moments themselves, and while the pictures and the autographs rock – the little things are the ones that are the most fun.

For more conventional – and important – tips on how to make your experience unforgettable (like wearing comfortable clothes and taking advantage of Will-Call) check out this piece too.