It’s the final chapter of The New Adventures of Peter and Wendy and as an old friend (and fan) of this delightful little YouTube series I just couldn’t let Season 3 pass without doing one more interview! 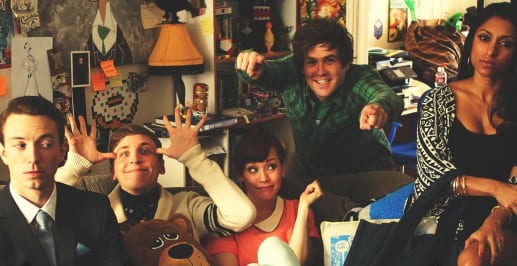 The final season is now underway, and Neverland, Ohio, is a magical place we have laughed, cried, and ultimately chose sides (Team Pan!) in. With new and exciting characters each season, and some of the most wittily woven words by co-creator and writer Shawn deLoache– I’ve watched this timeless tale get a hip new spin, and entertain me throughout the years. Peter Pan never wants to grow up, and I never want this show to end! But like all good things, they must come to an end, and instead of sobbing in the corner with a pitcher of pan punch in hand, let’s celebrate once more, our Darling friends, and the epic conclusion of their stories.

When we last saw the gang Wendy Darling (Paula Rhodes), had just said YES to Jas Hook’s (Percy Daggs III) marriage proposal; Back at the Pan Cave, Peter (Kyle Walters) is re-realizing that he can’t live without Wendy, and he wants to get her back. Awwww. Lily Bagha (Lovlee Carroll) is making her way up the corporate ladder after losing all of her money, and company to JH Media– oh and she’s totes dating Michael Darling (Brennan Murray) and they’re so #RelationshipGoals. Let’s not forget John Darling (Graham Hurtz), quirky, anal retentive and stubborn John Darling, who has been playing hard to get and giving poor Mr. Smee (Satya Bhabha) the runaround. But Mr. Smee’s not having any of that anymore, and is soooo over him. We’ll see how long that lasts…

As you could imagine, there are a lot of loose ends to tie up before the conclusion of the series, and Lovlee Carroll aka “Lily Bagha” herself is here to chat about it all! From Lily’s evolution over the years to what exactly Pan Punch consists of (we’re waiting on you for answers Kyle Walters), we giggle and gush, and have a blast remembering this modern adaptation from J.M. Barrie’s novel “Peter and Wendy.”

Check out my interview with Lovlee Carroll below: