This run of Venom all the way back in 2018 and since then has kind of exploded. This run of Venom by Donny Cates and Ryan Stegman has been incredibly popular. They’ve even introduced a new character who looks like he could become a Marvel classic character. Knull, the God of the Symbiotes, debuted during this her. Knull is also the main villain for the current Marvel event, King in Black. We now know that Venom #200 is Cates final Venom comic ever! 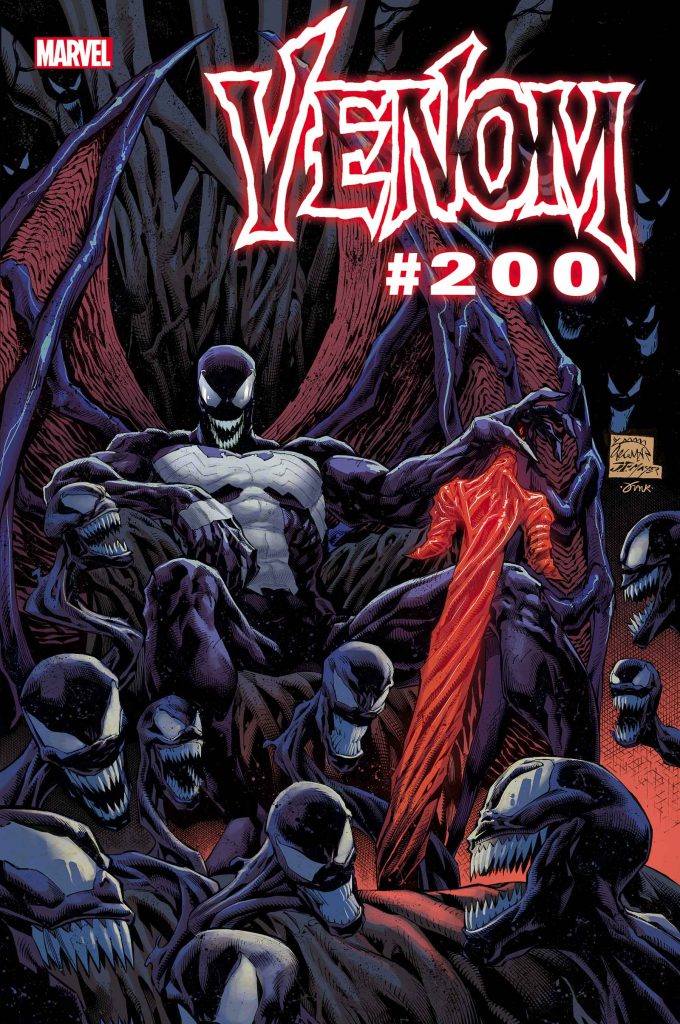 It was already previously revealed at NYCC that King in Black would lead into the Venom anniversary issue. We don’t know the full details at this time, but it’s pretty apparent Venom has some big changes going. Nothing is for certain, since King in Black is still going on at the time of this writing. However, the cover is leading many to believe that Venom is about to usurp the Symbiote God. It’s even possible that Venom himself could become the new God of the Symbiotes. We also learned that Venom #22 will be Cates final Venom comic ever!

Seen a lot of confusion about this so I just wanted to clarify.

Yes. Venom #200 will be my last issue writing Venom. Ever.

Thank you all for supporting us. This has been a lifelong dream come true to tell this story for you all. Thank you. Thank you all.

The cover itself is absolutely sick, that’s for sure at least. Stegman has been honing his craft throughout this entire run and here’s what he had to say about the cover.

“I feel like I’m always pushing. That’s just my motto in life and in comics. So I think there was definitely a lack of satisfaction with what I was doing. I thought that some of the stuff I was doing was cool, but I feel like once I got onto Venom, I started to really hone in what I did well. It was one of the first projects where I was like, ‘Oh, I know exactly how to do this and it just suits my style.’ Which at the time, my style was nebulous, but I felt like I started drawing in a way from issue one of Venom, that now I feel like in King in Black, it’s the ultimate form of that thing. If we have the cover to Venom #200, I feel like right now that would be the quintessential piece that exhibits what my style has become. I’m going to keep pushing for sure. But I feel like I’ve really found something. It’s a little bit annoying that we’re getting here to the end of King in Black.”

Venom #200 will hit the stands this upcoming April.