Vaporum is sort of an anomaly in the modern world – a grid-based  RPG with a steampunk flair, unafraid to adhere to its rather archaic roots in both puzzle design and movement – and it’s made all the better for it. 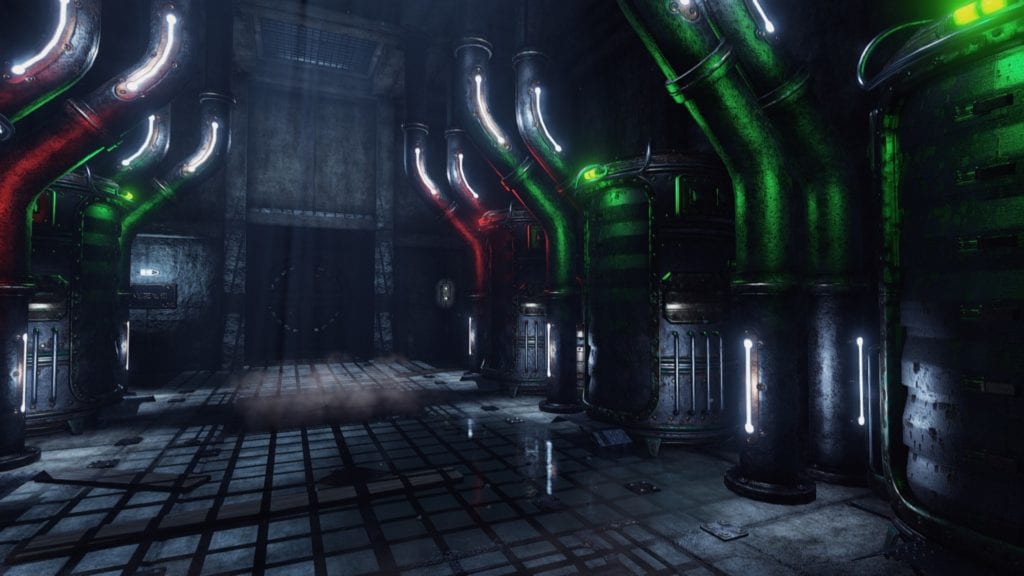 This steampunk dungeon crawler puts modern design aside in favor of a more old school approach, allowing movement only in a grid – meaning left, right, front, and back only – with only one object allowed to inhabit a specific square at any given time. While this does hamper movement, especially during some of the more claustrophobic fights, it also forces the player to think critically. A wrong move could mean death, or entrapment – which may as well be death when surrounded by the right enemies.

As you explore the various levels your map slowly fills itself in, letting you keep tabs on where you’ve been, where you need to go, and what areas are currently blocked off to you. The need to complete the map was enough to push me forward whenever I became stumped on a particular puzzle – I’d just search my map for another area not completed and work my way in that direction. Eventually it evens out – there’s always a way to proceed, despite not always being readily apparent.

Puzzles in this game are hard. Not necessarily because of the tasks involved, but more due to the fact that the game does not care about explaining anything to you, at all. For example (Skip to the next paragraph if you want to completely avoid gameplay spoilers): You’re exploring and you find a few books in a desk, they are labeled as quest items, but no futher explanation is given. You will continue to find books throughout the giant level – still with no explanation. But they must be important, right? Well, the game will never tell you and if you don’t figure out what to do with them, you won’t be leaving the level. So what do you do? You have to search chests, find letters from the various scientists stationed in that level, figure out which scientist studied which subject, find their rooms, and then place the books on their shelves. Easy right? Sure, once you know what to do – but the game never explains or even hints on how or why you need to do these things. This is quite alarming the first time you encounter a puzzle like this, but teaches you to think outside the box for later puzzles.

That said, I enjoyed the puzzles. More often than not you will be able to figure them out with a bit of trial and error and later puzzles, especially those involving trap doors in the floor, were particularly fun to solve.

That’s what I enjoyed most about Vaporum – it’s unabashedly old-school. There’s no hand-holding, there’s no helpful tips, there’s nothing that says “This is how you solve this” – it’s completely on the player. It’s a great throwback to retro games and helped me forgive the game whenever I did get a bit frustrated with a particular area.

Fighting and Leveling Up 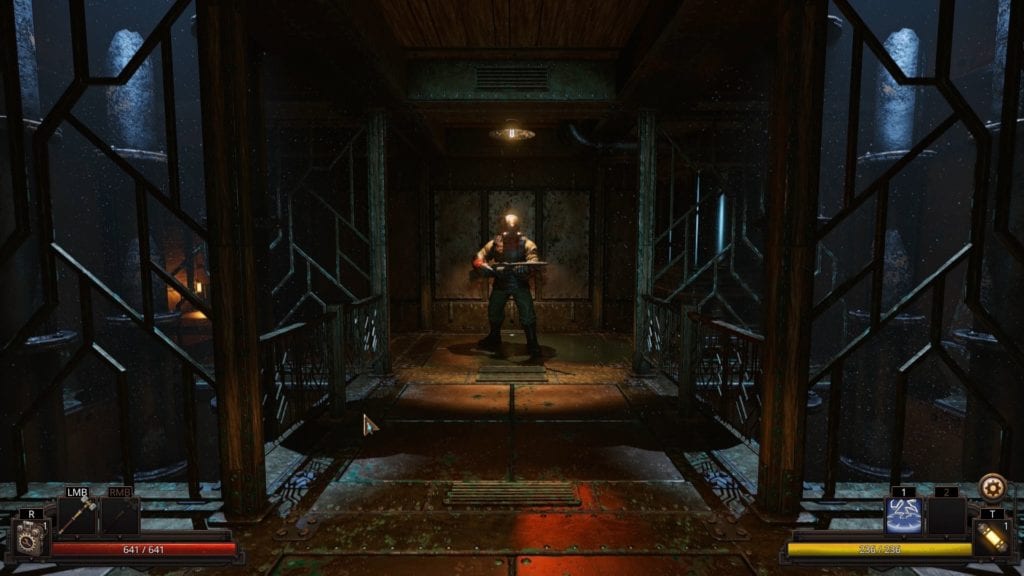 With the movement being grid-based you’d assume that the combat would be turn based, but you’d be wrong. The combat is in real-time, albeit you can slow or pause time to prepare for a fight, but I did this a whopping total of once and that was because the game was just telling me it was possible. I promptly forgot about that ability.

You can pause the game whenever you want, as well as save at any moment by holding L2+Options, so there is never too much fear upon encountering a fight. This freedom to save right before every encounter relieves a lot of stress normally associated with games of this type and left me free to enjoy the battle and saved me from frustration when the battles became too intense or when I stumbled into a fight unprepared.

As for the fighting – there are a ridiculous amount of ways to approach each battle. Enjoy two-handing war hammers? Dual wielding blades? Dual wielding a mace and a sword? Being a gunslinger? Shooting guns so large they knock you back a few steps? Fighting with a sword and a shield? Using various contraptions to shock/burn/melt your enemies? Stealing your enemy’s health? The list goes on and on. In fact, there are so many ways to fight you’ll probably be overwhelmed and stick to one style just out of reflex. I did, but I did try my best to switch things up. Thankfully the game does allow you two separate weapon setups which you can switch between with the press of a button. 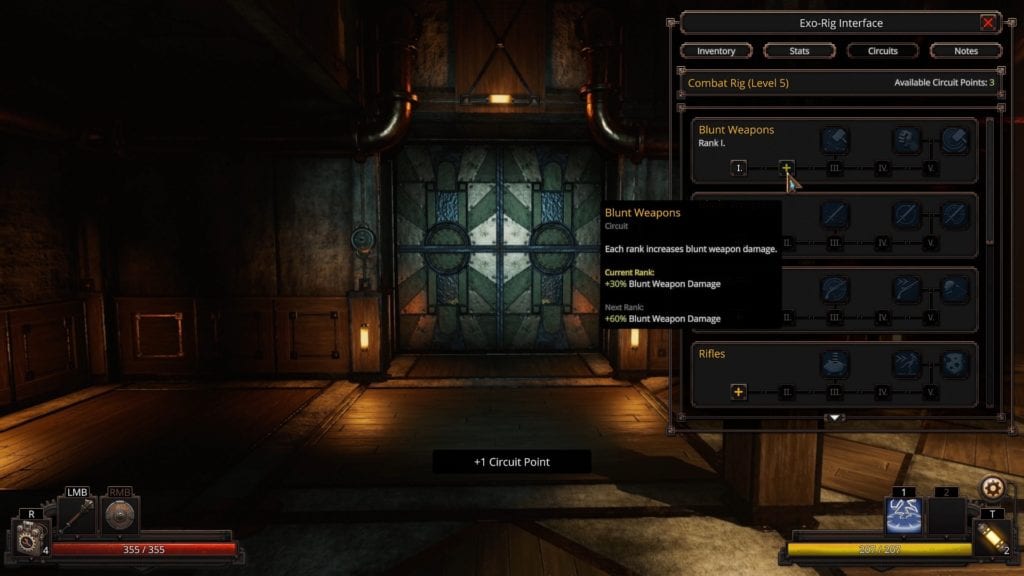 If I had any gripes with the combat system, it would be with leveling up. There are tons of options to choose from, including: improving your proficiency with blades, with blunt weapons, or dual wielding. Increasing your armor, your health, or your refresh rate. Or you could… well, you get the picture. There are so many options, each with five tiers of their own, that it absolutely encourages replay as there is no way you’ll come close to seeing everything the game has.

I beat the game at level 14, which was not high enough to fully level up just three areas of the skill tree, and that was maybe around 25% of what was available. 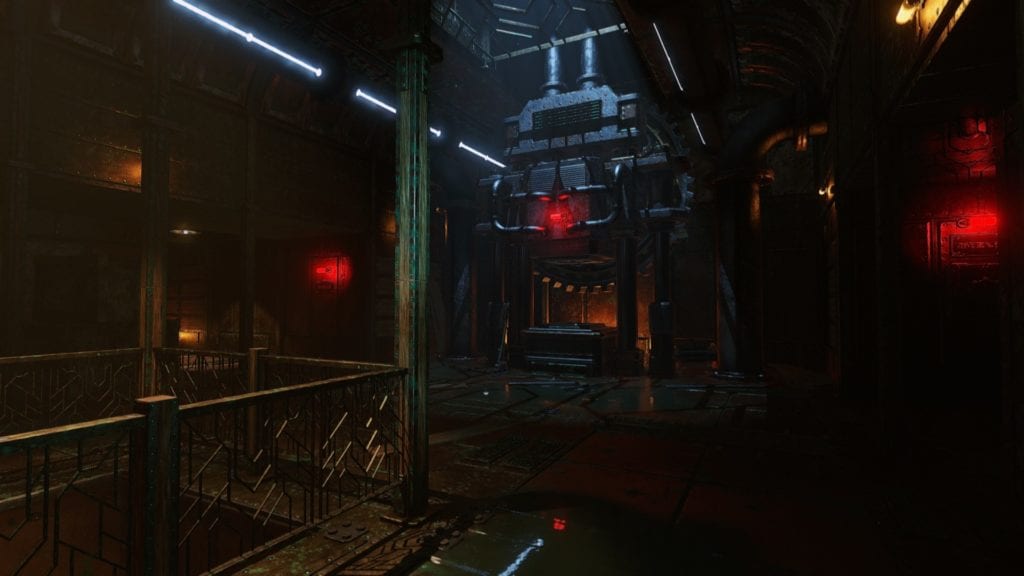 Vaporum is not a pretty game, nor does it try to be. It is dark and dirty, reminiscent of Bioshock but without the beauty of the water to contrast the dimness to. For what the game is though the graphics are nice. You won’t be in awe of any particular moment, but the enemies are appropriately frightening upon first encounter, the levels tell stories when the dialogue doesn’t, and you can feel the overwhelming burden of the world pushing down on you. 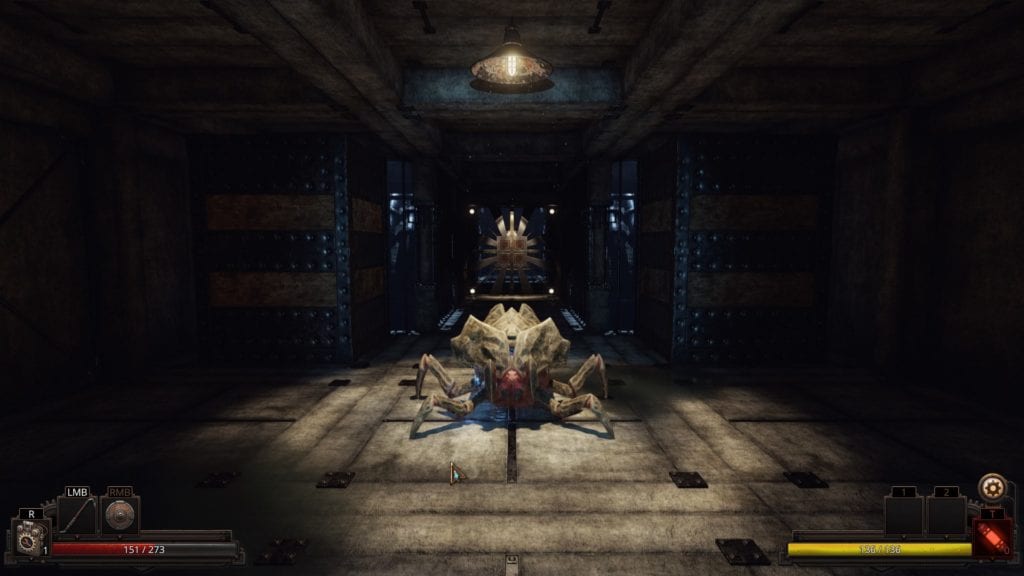 The story is told through audio files left behind by former employees of the Arx Vaporum and various readable documents, both scattered throughout the levels. There is the occasional comment from your character, but he mainly reacts to what you find in the world rather than contributing to the overall narrative – at least until the end. Exploration is a must as otherwise you’ll never under the story – plus, often times the writings or recordings explain how to take down new enemies or give codes to unlocking specific areas. The game again takes a page from Bioshock’s playbook with this, but it’s so fun to find each story tidbit that I’m in no way putting the developers down. In fact, I can’t think of a better way to tell this particular story.

I’ve always loved exploration and uncovering the story on my own terms, and Vaporum relishes in allowing the player to do just that. 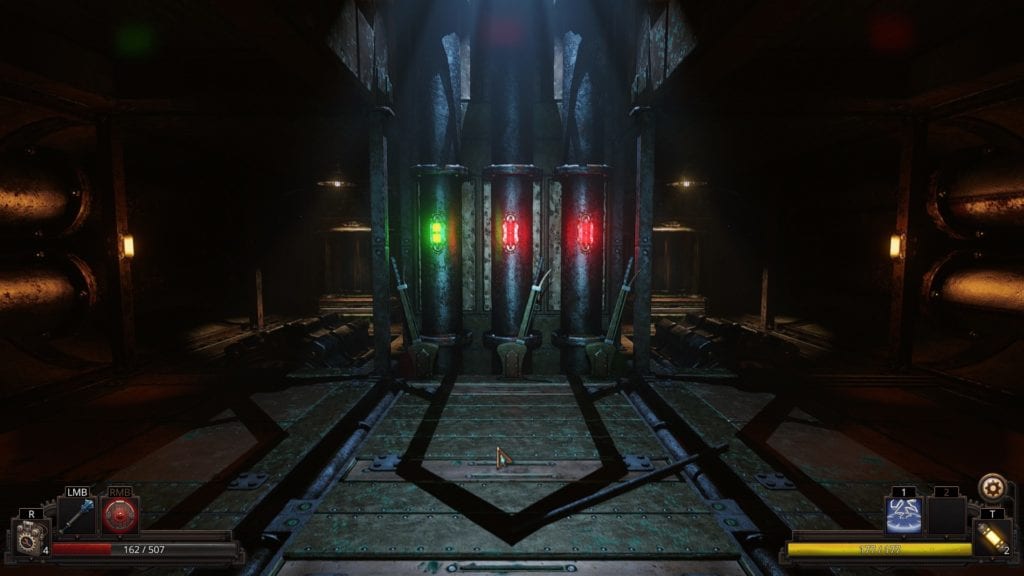 Vaporum is a unique beast in the modern world. My thirteen or so hours spent with the game were filled with fun and only the occasional frustration or annoyance. The level design lends itself to exploration, the lack of hand-holding forces the player to examine every nook, the story keeps you compelled, and the combat keeps you itching for the next upgrade or weapon. It is a fun game and I enjoyed my time with it immensely.

I’m not a completionist, and I’m not one to replay games with different builds, so the extent of replayability is essentially nil for me. But for those who enjoy creating different builds and tackling fights in new ways, you should be able to find a good 30 or so hours of playtime.

If you’re a fan of retro RPGs, grid-based dungeon crawlers, or thought-provoking exploration mixed with puzzles, do yourself a favor and pick this game up.

You can view the Launch Trailer below:

Vaproum was released by Fatbot Games alongside Merge and is available now on PlayStation 4, Xbox One, Nintendo Switch, GOG and Steam. Vaporum is currently on sale for $9.99 on Steam, $19.99 on GOG, and $24.99 on Xbox, PS4 and the Nintendo Switch’s eshops.

A digital copy was provided by Merge for review purposes.