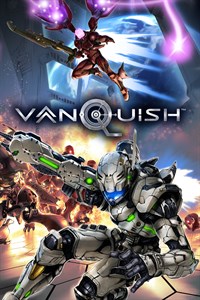 Vanquish is a cult classic that many may not remember. It often gets overshadowed by its counterpart, Bayonetta, which launched the year before and captured more attention. Sega has decided its time to bless us with Bayonetta again (the game has gotten re-released on Wii U and Switch), but I’m glad they are giving Vanquish its due and put it in this ten-year collection. The real question is, just how does it stack up after so long?

Vanquish is in my opinion one of the safest games we’ve gotten from Platinum Games. Not that it’s not a unique title, but it is a third-person shooter that plays mostly like a third-person shooter. When I play anything from Platinum it’s usually so weird, I’m left in amazement at the gameplay and nearly incoherent narrative. That feeling isn’t gone from Vanquish, but it’s not as prominent as it is with games like Wonderful 101 and Metal Gear Rising: Revengeance. 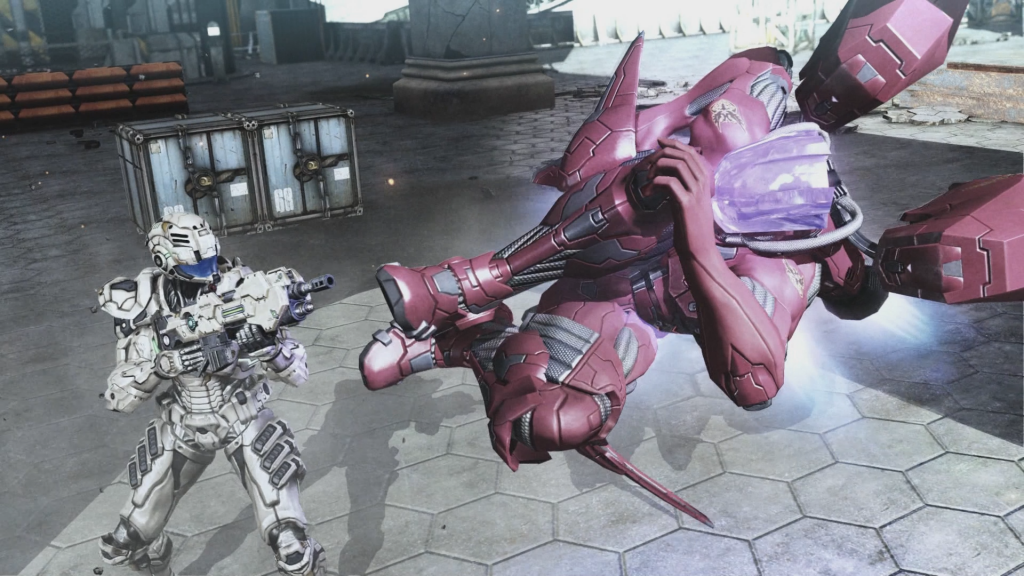 Speaking of Metal Gear, That’s the vibe I get concerning the story. Not to mention the main character, Sam Gideon, is pretty much a gruff young Snake. And you have no clue where the story is truly going. And he smokes like, all the time. Dude flipping hanging from a ledge after getting smacked around and decides to chill with a Marlboro. In any case, a super convoluted narrative leads me to this impression.

With the story of Vanquish, I never truly knew what was going on.

Even as the credits rolled, I still only had a basic understanding of what had transpired. The game very much sets up a sequel, and I hope the remaster gives it a chance, but it was hard enough to know what was happening around me in that moment. Space Russians, the destruction of San Francisco by a satellite laser which literally melts the populace? A big half robot marine played by Steve Blum yelling at me yet double crossing me? Somehow the president is in on everything and a scientist I’m rescuing and who gets all of fifteen seconds of screen time is playing a larger role in all of it? I don’t know if your head hurts after all you’ve read, but mine did. 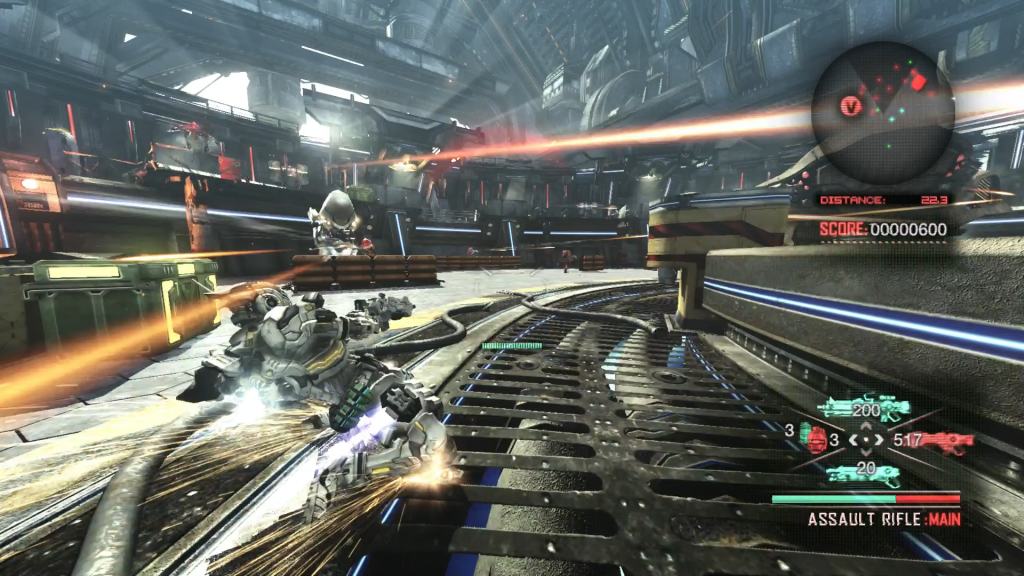 For all the craziness of its story, Vanquish is tremendously fun to play. As a DARPA operative Sam Gideon wields the Augmented Reaction Suit. This crazy thing that looks like the brainchild of Tony Stark does two things. It can at the press of a button use rockets to send you careening around levels (on the ground though, no flying for you), and can trigger a bullet time like state to help you escape from death. Or you can use it every time the cool down finishes to shoot people in slow-mo. But to each their own.

I admittedly didn’t get much use from the movement mechanics. Running from a bad position is usually when you’ll get the most use from them. As with most games with controllers, it’s hard to shoot and zoom at the same time. It’s akin to running in Gears Of War, it’s nearly impossible to control besides aiming straight forward.

Your suit also stores your weapons.

There aren’t a whole lot of variety in them, but its important to pick them up as often as possible as they are scanned in and count towards upgrades for said guns. They are all very easy to use, and if you run out of ammo don’t feel bad to drop it for something else as you’ll encounter another pretty quickly. The one weapon I kept on Sam at all times was a laser cannon. It uses the cool down for your suit, but hits hard and will save you versus bigger enemies. Gunplay is very enjoyable in Vanquish as there isn’t a lot of recoil to bother you. Not to mention, there are tons of enemies to melt. And melt they do given the amount of bullets you eventually have at your disposal if you keep upgrading.

The gameplay stays pretty standard for most third person shooters. Watch a cut scene, fight bad guys that are keeping you from progressing, and move to the next level. So on and so forth. Platinum’s usual creativity is what saves what some would call mundane design into something fun, and it appears regularly in Vanquish. The bigger enemies you encounter are very creative, I just wish I better understood them. Like, add a backstory for how these robots came to be. Bosses I have a connection to draw me in, and it seems many studios miss this detail. 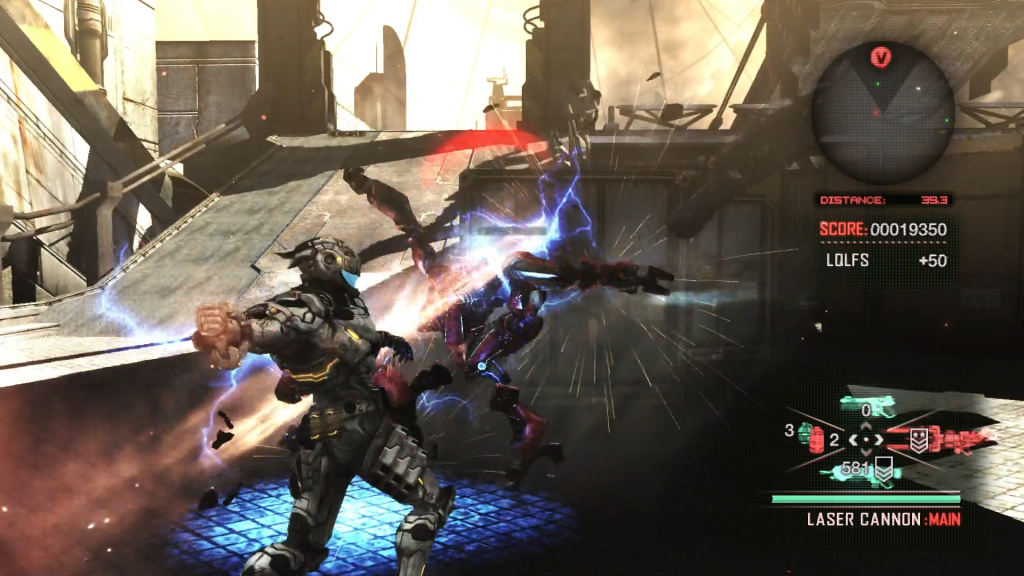 So now the important part. When it comes to remasters, the real thing that matters is how it plays. Is it pretty? Does the frame rate run well? I can say I’m happy to report good, even if I have a qualm.

You can see the effort put into this game in how clean it runs.

I played Vanquish on an Xbox One S on a non-4k TV. I didn’t experience much of any tearing, slowing, or lagging. Vanquish preforms well. Graphically you can see clean up, but there is not much tweaking. The cut scenes are not Halo 2 remaster quality, but they still look pretty good. My only issue is the game still looks quite dated when held up to anything of today. You don’t necessarily play Vanquish to see something on the level of Horizon Zero Dawn. But as a gamer I would love to see this game get a Shadow Of The Colossus remake. It has potential, and I hate seeing that fall to the wayside.

Otherwise, the soundtrack is banging. I love the arcade-y feel it adds as you run around shooting up the place. I also want to take a moment and thank the team that made those credits at the end. You will never find a more unique set in a game. If you don’t know about them, play the game and beat it! It is worth your time for those credits!

All and all, I enjoyed playing Vanquish again. I never finished my original play-through, and I’ve been meaning to play the backwards compatible version on Xbox One. Vanquish Remastered is the definitive way to play the game, whether a new player or a returning one. The game was already pretty awesome, and though it still shows a bit of age, its another Platinum Games gem worth playing.

Vanquish Remastered is available now for PlayStation 4 and Xbox One for $24.99 (click the links to purchase it digitally!). You can also purchase it as a bundle with Bayonetta for $39.99. Thanks again to our partners at Sega for providing a review code for Xbox One.