The conclusion of Star Wars: Rebels, Season 4, has been released on Blu-ray! One prominent female character in the series was Hera Syndulla. If you haven’t watched Rebels, you may recognize her name from an announcement made on a loudspeaker in Rogue One, when she was addressed as “General Syndulla.” Not only as a Rebel leader, but also as a caring friend, Hera is arguably one of the strongest protagonists in the Star Wars universe. I was fortunate enough to chat with voice actress Vanessa Marshall, Hera herself! Vanessa Marshall also portrays Gamora in Guardians of the Galaxy, another series on Disney XD, and has continued her role as Hera in Star Wars: Forces of Destiny; check out the interview below to learn more about Rebels, Vanessa’s other roles, and so much more!

SH: How did you get into voice acting?

VM: I was actually performing in a sketch comedy one-woman show in which I played about fifteen different characters. A voice over agent saw me in the show and said that I should be doing animation, so, I went into her office and I read for her. I have been doing voice-over ever since, and that’s my current voice-over agency, CESD Los Angeles. I guess it’s from my sketch comedy and stand-up comedy background.

And all the different characters that I did that demonstrated that I could do several voices. So that’s how that happened. But prior to that, I had gone to Princeton for undergrad and I majored in English, so luckily it’s my first language and I can read it out loud, so that’s good. I have a masters in acting from NYU Graduate School at Tisch School of the Arts and that’s where I studied all kinds of dialect, so that also came in handy as I pursued voice-over. I’ve been doing so ever since. 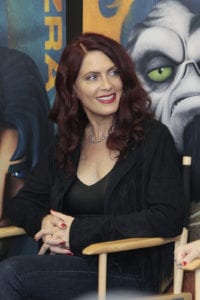 SH: Hera, your Star Wars: Rebels character, had a lot of character development throughout the series. How do you feel about Hera’s growth as a rebel leader?

VM: Oh, I was thrilled with her growth as a leader. From the very beginning, she held all sorts of information about Fulcrum and she distributed that as necessary to the crew. As they (and the Empire) gained in strength, she sort of went up the ranks. I think they became an even tighter crew, perhaps a more solid family. We were able to see her love story develop a bit more with Kanan in the fourth season. That really rounded it out for me, to the very end, where she ends up having a child with Kanan. So, she really developed quite a bit, and it was really satisfying for me and I hope it was for the fans as well.

SH: In the final season of Rebels, Season 4, we saw Hera in a romantic relationship with her longtime friend, Kanan. Were you rooting for this to happen with these characters, or did you not really have any strong feelings about it?

VM: I was rooting for it to happen, but I also understood that they were in such dire consequences that it almost seemed like a romance of any kind would be almost selfish or silly, given the amount of lives that they were trying to save within the story. So I’m kind of glad that even in spite of that, they were able to connect. Maybe they had been connecting all along. It wasn’t visible to us, as fans, but I was really happy that we were able to witness them really expressing their affection for one another. I’m glad that it happened.

SH: Is there any part of Hera that you identify or connect with, in terms of her personality or character development?

VM: A lot of her personality. Ethically, I think I’m on the same page with her. I feel very much for people who are marginalized and who can’t stand up for themselves. I think I have a pretty big heart and I’m wired to help people. It’s just my nature. It always has been. I’m also a martial artist, so I’m skilled in combat, if you will, and while I don’t have a pilot’s license, my father is a pilot. He was in the air force, and he flies an open cockpit biplane. I go flying with him and do aerobatics. I think I understand the spiritual value of flight and why it means so much to her, as my dad has explained how much it means to him: to get up in the air and get perspective on the Earth and civilization below. I really keyed into that in terms of her overall personality. She’s also a very maternal, nurturing character, and I find myself to be the same way. I have a sense of humor like she does. I like to make people laugh around me, and get a lot of hard work done, but have a good time doing it. That seems to be how she ran the Rebels crew, so, there’s a lot of me in Hera, and vice versa. It was an honor to play her, and let all the best elements of my personality come out.

SH: Assuming you’ve seen Rogue One, what was it like for you to hear your character’s name mentioned over that loudspeaker on Yavin 4?

VM: Oh, it was mesmerizing! It completely took me out of the movie, so I had to see it about three or four times. I usually see Star Wars movies that many times anyway, because I just love them! But I really was shocked. When I was walking into the theatre for the premiere, David Collins, (who did some of the background voices) said, “Hey, by the way, I call your character’s name,” I thought he was kidding so I just said, “Yeah, that’s nice.” Then, when I actually heard it, I almost started crying. I went up to him afterwards, and I apologized. I said “Hey, I didn’t mean to blow you off, I just didn’t really, actually think that they would call her name. That’s amazing!” I actually did a background voice myself, I think it was one of the Gold pilots. Number nine, if I’m not mistaken. I got to say, “I see you red leader,” and that was an honor. They sent me the audition with a sound file of an actual air force pilot, who kind of talked like this down in here. (Deepens voice) She was sort of, very serious about the whole thing. I did the audition and sent it off in an MP3, and then got a phone call saying “Hey, your voice is going to be in Rogue One!” So, that movie was kind of a two for me, as a fangirl. She lives, as far as I can tell, and I’m grateful that her name was mentioned. Also, I got to hear myself say a line in a Star Wars movie. I ended up doing the same thing in the Solo movie. Rogue One was a treat to watch. Still is.

SH: We’ve talked a lot about your role in Star Wars: Rebels, but I know that you also play Gamora in another Disney XD series, Guardians of the Galaxy. Could you tell me a little more about that role?

VM: Gamora, as everyone knows, is the deadliest woman in the galaxy. She’s sort of orphaned and raised by Thanos, and trained to be an assassin. When she ultimately meets the rest of the Guardians crew, she is looking more to redeem herself for all of those aspects of her earlier life where she was quite aggressive and murderous. So, she also is skilled in combat. She’s also, of course, green. What I really loved about her is that I think she has a really big heart, and I enjoyed discovering how she is able to sort of open her heart and become the best version of herself alongside her new crew. I feel like we all deserve second chances, and those hardened criminals, that motley crew – they’re all sort of looking to redeem themselves together. I thought that was really special. Again, it’s an honor to portray such a strong female character. She’s really an iconic one for the books there.

SH: Lastly, is there anything else that you’re currently working on or that you have coming up?

VM: Star Wars: Forces of Destiny continues on the Disney YouTube channel, and Star Wars: Rebels Season 4 just came out on Blu-ray, and I’m not sure if you’ve seen the Teen Titans Go! movie. I’m in that. I was just in an episode of Rise of the Teenage Mutant Ninja Turtles on Nickelodeon, Ben 10, and also Stretch Armstrong on Netflix. I just did a bunch of promos for NBC for World of Dance, America’s Got Talent, and some promos for CBS’ Bold and the Beautiful. So there are all kinds of random things going on! I’m so excited though I have a couple of cartoons and games that I’m not allowed to say anything about, but if people follow me on Twitter @vanmarshall, or on Instagram @vanessamarshall1138, I will update you as soon as I am able with all the good news! New episodes of Guardians of the Galaxy return in March 2019, so you catch up on episodes on the Marvel HQ YouTube channel in the meantime. The second half of the third season is epic! We meet up with them after they’ve gone into the Black Vortex, and it’s some of the best animation I’ve ever seen. Each character is sort of in their own private hell and they use different kinds of animation styles to exemplify that. They all have to find each other, and it’s all based on the ride at California Adventure down at Disneyland in Anaheim. It all kind of links together and it’s pretty exciting, so you can look forward to that in 2019!

Shaun Hood currently attending Northern Essex Community College. He has experience writing for his high school’s online newspaper, The Pentucket Profile (pentucketnews.com). Outside of school, he enjoys going to conventions and exploring other ways to get involved in the shows he watches. Favorite franchises include Star Wars, The Walking Dead, Stranger Things, This Is Us, and Once Upon a Time.