The film stars John Cho (Star Trek, Harold & Kumar) as David Kim, a father who is searching for his missing daughter. When the police investigation comes up short with no potential leads, Kim takes matters into his own hands. He then begins a deep dive into his daughter’s life online through photos, social media accounts, emails, videos and more to help with the police investigation. It’s a thrilling ride of a film which explores the deep, dark world of the Internet.

From Sony Pictures Home Entertainment, the Digital and Blu-ray/DVD release offers a unique take on society’s pervasive use of technology through its intriguing and extensive bonus features. The home release contains audio commentary from Chaganty as well as three behind-the-scenes featurettes which are sure to blow the minds of viewers. The featurette titled Changing the Language of Cinema takes viewers into the world of the creative process behind a film told entirely on the screens of devices which we use in our everyday lives. Explore the film’s cinematography through the featurette Update Username: Cast and Characters which features interview with the cast and filmmakers. Perhaps the most intriguing of the featurettes is Searching for Easter Eggs, where Chagnaty and Ohanian take viewers through all the hidden Easter eggs within the film revealing subplots and hidden mysteries. 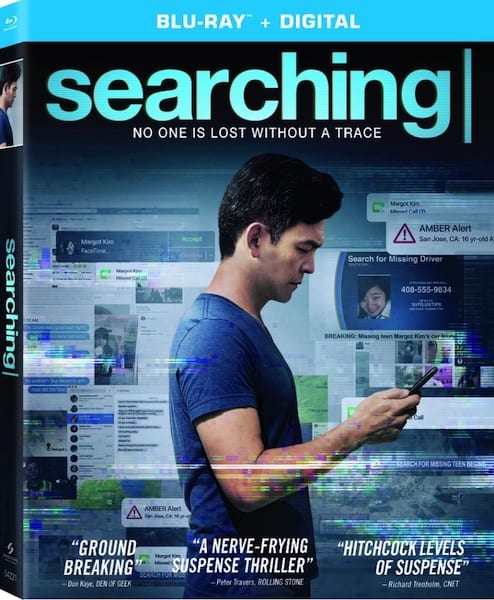 The official synopsis for Searching is below:

[row]”After David Kim (John Cho)’s 16-year-old daughter goes missing, a local investigation is opened, and a detective is assigned to the case. But 37 hours later and without a single lead, David decides to search the one place no one has looked yet, where all secrets are kept today: his daughter’s laptop. In a hyper-modern thriller told via the technology devices we use every day to communicate, David must trace his daughter’s digital footprints before she disappears forever.”[/row]

Get ready to experience an innovative and ground-breaking film unlike any you’ve ever seen before!

Searching is currently available on both Digital and Blu-ray/DVD formats and you can get your copy HERE. Make sure you pick up your copy today to uncover all the hidden Easter eggs and subplots in this modern-day mystery thriller.

This post is not sponsored, but we may receive a portion of sales if you purchase one of these items! Thank you for being a valued reader of Fan Fest News*