Tyler Hochelin is quickly becoming a busy man these days. He’s got a romantic comedy based on the New York Bestselling novel Can You Keep a Secret? with Alexandria Daddario in works and just signed on to star in Netflix’s new space drama series Another Life. On top of that, he will soon be reprising his role as Clark Kent/Superman for the Annual Arrowverse crossover.

Thankfully, Hoechlin was attending Heroes Villains Fan Fest this past weekend in New Jersey and was able to provide some upcoming scoop on projects past and present. Check out some of the highlights from his panel below, including this face: 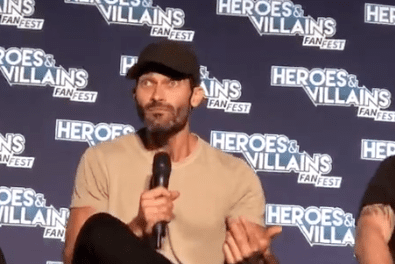 On his Teen Wolf Days:

Hoechlin recurred on MTV’s Teen Wolf as Derek Hale throughout its six-season run and when asked to talk about his time on the show, he touched on the relationships he formed and how he tries to measure the success of a project by what he learned and the bonds he formed along the way.

[row]”A lot of my best friends in my life are from that show, so, I’ll always be really grateful for all of those relationships. [/row]

When he became Superman:

When Supergirl announced that they would be introducing the iconic Clark Kent in their sophomore seasons, fans were ecstatic. Although no one was probably more excited to wear the cape and glasses than Hoechlin who celebrated his casting in Viva Las Vegas!

[row]”I remember I was in the car driving back from Zion National Park in Utah with my brother and we were about 15 minutes away from Vegas when I got the call. I looked at him and was like ‘I’m gonna be Superman’.[/row]

Tyler Hoechlin did what anyone else would do when they find out they are going to be Superman-go to Vegas! #HVFFNJ pic.twitter.com/ZAx6TyZtIY

It was announced that not only would Superman be appearing in the upcoming annual Arrowverse crossover, but that Lois Lane would be making her debut as well.

[row]”I don’t know anything about it. I don’t know who it is yet, but it’s obviously really exciting having new characters pop into this one...so, it should be a lot of fun! We don’t know exactly where Clark and Lois are in their relationship in the crossover. I’m trying not to guess what we’ll have together, I’m just excited for how we present the relationship”[/row]

Superman will be back for the Arrowverse Crossover and Tyler Hoechlin is just as excited as we are to find out who Lois Lane will be. #supergirl #HVFFNJ pic.twitter.com/zKv2XF0e8C

On the hilarity of shooting those Superman V Supergirl staredowns:

They may look badass on TV but when filming those staredowns without the heat vision effects, things can feel a bit ridiculous.

Be sure to catch Hoechlin suiting back up as Superman in this year’s Arrowverse crossover starting with The Flash on Sunday, Dec. 9 at 8 p.m followed by Arrow on Monday, Dec. 10 at 8 p.m., and concluding with Supergirl on Tuesday, Dec. 11 at 8 p.m.