Transformers: The Last Knight may not be hitting theaters until June 21st, but now kids and adult stuffed animal lovers such as myself can head to Build-A-Bear Workshop and get a cuddly Autobot guardian of their very own!

Today, Build-A-Bear Workshop has announced the new Transformers collection, which includes a beary cool Bumblebee and Optimus Prime teddy. However, these are not just any normal teddy bear… these teddy’s include a feature that allows you to change them from cuddly bear to fierce bot by flipping a hood over their face!

In addition to the bears themselves, you can also purchase Transformers PJs, hoodies, and slippers. You can even choose from sound clips,  so that your Beary Optimus Prime can say the iconic ‘Autobots… Roll Out’ at the squeeze of his paw.

Transformers Optimus Prime and Bumblebee can now be purchased for $32.

Transformers: The Last Knight opens in movie theaters on June 21, 2017. 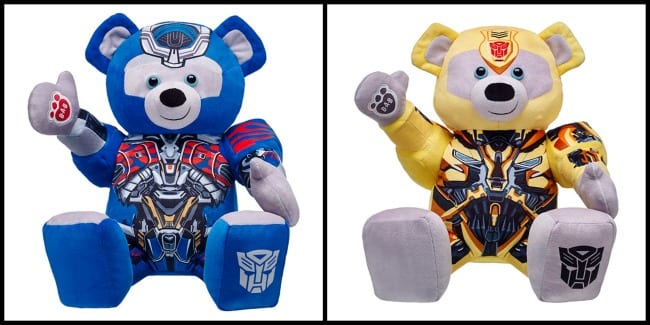 Home » Fandom » ‘Transformers’: The Autobots have ‘rolled in’ to Build-A-Bear Workshop!