If there is one thing that we know about Michael Bay for sure, especially in regards to his Transformers movies, it is that he has a love for explosions. While it is true that most of his films are filmed on the green screen, the actors themselves and some of their filming locations are very real; such as in the second movie when they filmed Sam’s college scene at Princeton University or the few times they’ve filmed on the streets of New York.

“Michael’s sets are practical, so you would think that maybe 90 percent of this film is done on green screen, and it’s really not,” Laura Haddock, co-star of the upcoming summer blockbuster tells EW. “He loves an explosion. He absolutely loves them, so if he can use them safely, he will. Often you’re running through what feels like a genuine … battlefield. Something that kind of builds your adrenaline. You’re absolutely experiencing what it feels like to have an explosion go off just behind you. And you’re just running, running for your life.”

“Some days, you go home and you’re just covered in, you know, bruises and cuts, and you just think, ‘That was one of the best days I’ve ever had,’” Haddock says.

Transformers has traveled to some pretty cool and historical sites when it comes to their filming locations. One of the battlefields in the movie, which links the Transformers history to Arthurian legend, was actually filmed at a pretty historical site in the fields of England- Stonehenge!

“I mean the man took a whole crew and cast and unit to Stonehenge and then by the time he had made it down the road, built another Stonehenge just so he could blow it up,” Haddock says.

You know that, being Michael Bay, he probably asked if they’d let him blow up the real one.

“Oh, that question was most definitely asked,” Haddock says. 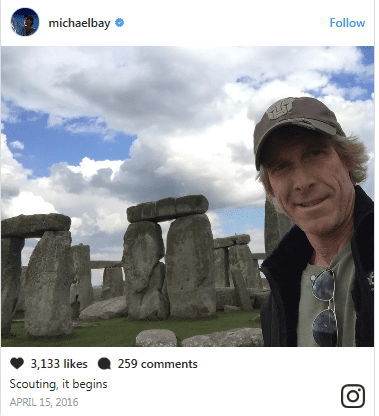 Home » Featured » ‘Transformers’: Michael Bay Recreates Historical Monument… So He Can Blow It Up