So with the curse seemingly lifted, what other series could use a proper update/ continuation? Whether animated or live action, here are some options:

Ok, let’s get this off the list right away. And I know what you’re going to say “Oh look, another person who wants Firefly back, how original!”. Well if everyone is clamoring for it to come back, CLEARLY it was doing something right. This show embodies “Space Cowboy” – maybe more than Nsync’s 2000 Hit. But seriously, how many times have you seen a Space Western about a crew of renegades trying to navigate a universe filled with two warring factions – one a wealthy tech-heavy empire under dystopian rule and the other poor and oppressed.

Add in a stellar cast and the fact that Firefly DVD sales are still going strong and yah… this show is off to a pretty good start. And more than that, this show merged genres and writing styles that sets it apart from any show before or since. Sure the film Serenity closed some of the storylines but there were still cliffhangers and a ton of storylines to follow. So come on guys. If you get started right now, you can make it in time for the 15 year anniversary in 2020!

80s cartoons seem like the shows that people always try to reboot but never get just right – or reboot so many times we can’t tell one from the other. Hell, just look at the Ninja Turtles and Transformers movies/ series. Though this began to change with the release of Netflix’s Voltron reboot. Sure there’s been Voltron reboots before, but none like this. It had a really solid first season but then a second season that expanded the universe like never before. It made Voltron genuinely feel like a “Defender of the Universe” and not just the same old locales the bad guys usually invade.

So why not give this treatment to another 80s staple: He-Man and/or Thundercats – I truly couldn’t decide. Each show already has a rich back-story and a couple of previously failed reboots they can draw story ideas from. There’s a wealth of lore and more can be added about these characters and the exotic locations they’ve found themselves in. Then again, maybe someone can revive these series into a film like Power Rangers. Whether He-Man or Thundercats, there’s a new world to be made and as long as it’s handled with both a love of these characters and great storytelling, these series could live on in any format.

Over the years there’s been plenty of Transformers cartoons and films, but there is always one series that stands out above the rest – Beast Wars! Sure people can argue whether Transformers Armada or Transformers Cybertron were the better series, but Beast Wars will forever be in a class of it’s own because it both was and wasn’t a Transformers cartoon. On one hand, it seems to predate recorded history as Earth is still young and humans have yet to evolve; but on the other hand the Great Cybertronian War is over. Some series staples return just under different names – such as Maximals and Predacons – but this series goes far beyond what any Transformers show has done before or since in terms of the “realness” of the characters.

Whereas Transformers has always given us Robots capable of emotions, Beast Wars gave us robots that actually felt human. Never before has the idea of a “spark” felt more like a “soul”. There was genuine exploration of love, a full range of personality types and a character that could actually be classified as full on serial killer. Plus the concept of transforming into animals was not only fresh but also had story reasons – thus making these no longer ‘Robots in Disguise’ but rather ‘Robots Trying to Survive’. Earlier this year there was a rumor that there may be a Animated Beast Wars series coming to Netflix, but as of the moment it’s still just rumor. Regardless, this is a series that desperately needs a successor – along with another killer guitar solo opening!

In the late 90s/ early 2000s, DC dominated with their animated series. From Batman: The Animated Series to Justice League and even further to Batman Beyond, they kept a level of inspiration and continuity we haven’t seen since. Though there was one series that stood out from the rest, Static Shock. Static Shock was a coming of age story for an African American teen as he navigated school and his emerging super powers. From keeping continuity with the other DC Universe shows to having a wide assortment of real life guest stars, this show was one of the most exciting that DC ever put out. 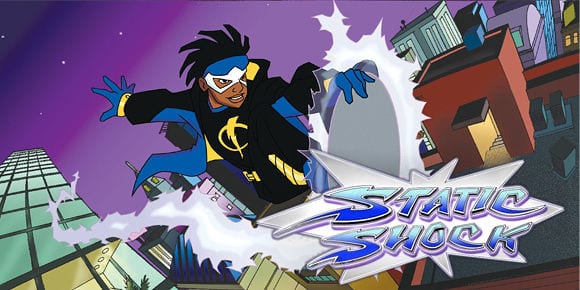 Though what made Static Shock truly an incredible show was how it could actually tackle hard-hitting issues like racism, poverty, bullying, gang violence and teen homelessness with the proper lens. It didn’t feel like an after school special with Batman putting a stop to bullying. Everything had a natural flow to it and the subject matter was very heavy sometimes, but it never once felt forced. The audience grew with Virgil and thus felt the weight of these issues right along side him. I could go on and on about this series, but this article is already running long – so here’s a great article about the 15 Best Episodes of Static Shock. In summary, with so much going on in the world right now, we need a series like Static Shock more than ever. This can’t be an ego project. Whether animated or live action, Static Shock needs a return that truly captures the spirit and purpose of the original.

There are two types of people in this world: Those who saw this #1 Spot coming and those who have never watched Gargoyles. Cartoons were just different in the early 90s; and that’s not me being a nostalgic “back in my day” stereotype, but fact. Gargoyles was a Disney cartoon that told the story of mythical creatures sworn to protect humanity that were then betrayed and hunted to extinction by humanity. We’ve spoken about how Static Shock presented serious issues without making it seem like an after school special. Well Gargoyles is that x10. Whether dealing with ancient literature, racism/ xenophobia, gun violence or interracial love, Gargoyles didn’t pull any punches. It wasn’t afraid to show kids that the world is a scary place, but even in the darkest of night, there are heroes out there.

Right? There are not many shows that do that nowadays with censorship and overprotection. Hell, the first episode of Gargoyles had a scene focusing on the bleeding hand of the main character Goliath as he catches a sword. Name a Disney cartoon – or any kid focused show lately – that actually shows flowing red blood. Though this wasn’t done for the sake of “gore” but rather to show the audience that despite these “being” looking like monsters, they still bled just like you and me. That is some Merchant of Venice stuff right there. And while we’re on the subject of Shakespeare, this show worked Shakespeare and more into this series. Again, name a show that deals with classic literature.

Gargoyles made you at everything differently: the world around you, books, and even villains. Many people often cite David Xanatos as the pinnacle of villains, and considering the man now has a literary device named after him (ie: Xanatos Gambit), you can see why. Over the series, Xanatos’s motivations and overall character changed. He was a scientist, a strategist, businessman, and a family man. He showed that villains weren’t always “evil” and heroes weren’t always “right”. He was clever, he loved logic, he didn’t care about revenge or world domination, he was already wealthy, and was always seven steps ahead. Even when he was beaten, he never lost. Let’s face it, when even the series antagonist is a rolemodel, you have an absolutely astounding show!

I can honestly go on and on about this series – to the extent of writing academic papers on it – but that’s an article for another day. Though there are two already existing articles in particular that do the job wonderfully. Jordan Calhoun on BlackNerdProblems wrote an incredible article about this series, and if you have time for a longer read, RoAnna Sylver on MoviePilot also wrote a fantastic piece. Gargoyles was a phenomenal show that had layers upon layers of depth – not to mention the incredibly talented voice cast. There’s a reason “Gargoyles Getting A Movie” is an ongoing April Fools joke, because it’s something we want to believe. And if you ever get a chance to watch this series, you’ll soon believe too!

Whether you agree with these choices or not, you have to admit that reboots should only be done if they fulfill the Three Rules – otherwise leave them alone. Perhaps Power Rangers and Samurai Jack were just flukes and the curse hasn’t been lifted. The true test might come in a few months with the release of the Ducktails reboot, which shows both promise (voice actors & story) along with some hesitation (vastly different animation style). Then again, as Power Rangers proved, sometimes “looking different” can have wonderful results!

Though what series would you like to see rebooted/ continued? Do you have a different Wish List? Sound off in the comments and let us know!